Motivation
Think of the stars in a galaxy as an iceberg. When we observe a galaxy, we see only the brightest stars, or the tip of the iceberg. To infer how much of the iceberg is hidden, we must make a few assumptions. One assumption is the shape of the initial mass function (IMF). The IMF is the initial distribution of masses in a population of stars. In the Milky Way, the measured IMF is similar across a range of environments. Until recently this same shape has been assumed for other galaxies. In the past few years, studies have found evidence that the IMF in elliptical galaxies varies systematically with galaxy mass. The authors of this paper revisit that question by counting the remnants of massive stars.

When massive stars die, they become neutron stars and black holes – collectively called stellar remnants. When a stellar remnant is in a close binary system with a star, it can pull matter from the star. This accretion is energetic enough to produce X-rays that can be detected in other galaxies. If the donor star is low-mass, these systems are called low-mass X-ray binaries (LMXBs). By comparing the number of LMXBs in different galaxies, we can compare the number of massive stars that were formed in these galaxies. If we divide the number of LMXBs by the number of low-mass stars (as traced by the galaxy’s light), we can compare the shape of the IMF in these galaxies. The authors take this strategy to compare the IMF in eight galaxies.

Methods
The authors select a sample of eight galaxies which have deep X-ray observations in the Chandra observatory data archive. The sample is also required to have Hubble Space Telescope (HST) photometry to measure the total galaxy light and exclude X-ray sources in background galaxies and globular clusters.To count the number of LMXBs in the galaxies, the authors first need to throw out other X-ray sources. Active galactic nuclei emit X-rays from the accretion of matter onto a supermassive black hole. If these are lurking in the background behind the target galaxies, they must be excluded from the tally of LMXBs. Another type of X-ray source that the authors exclude is LMXBs in globular clusters hosted by the target galaxies. 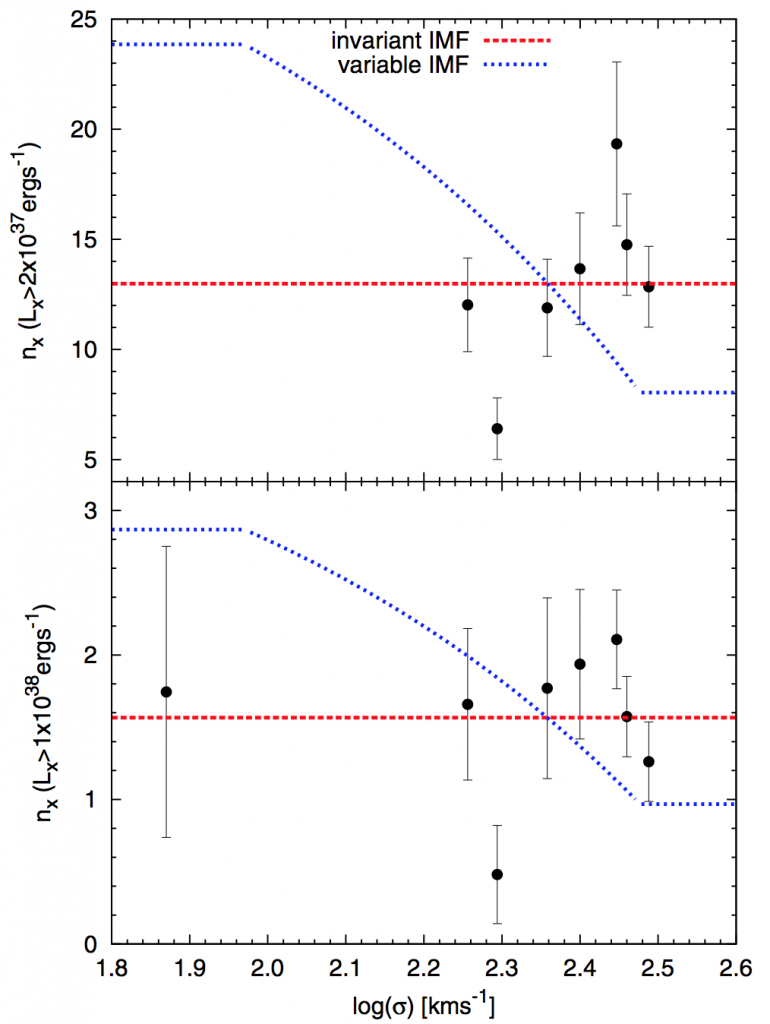 Ratio between the number of LMXBs and K-band luminosity (nx) versus velocity dispersion (σ).The black points are galaxy data. The dashed lines are predictions for a constant IMF (red) and an IMF that varies systematically with σ, as predicted by previous studies (blue). The only change in the bottom panel is that it only includes brighter LMXBs, which allows a significant measurement in the 8th galaxy. In both cases, the galaxies are consistent with a constant IMF.

Results
In Figure 1, the number of LMXBs divided by the total K-band luminosity  is plotted against velocity dispersion (σ) for each galaxy. σ in these galaxies is directly related to total galaxy mass. The LMXB counts in 7 of the galaxies show no evidence for a variable IMF. One outlier galaxy has unexpectedly few LMXBs. This outlier cannot be explained by a systematic variation in the IMF, but the cause of the discrepancy is unknown.

Conclusions
The evidence from low-mass X-ray binary counts does not support the claim that the initial mass function varies systematically with galaxy mass. This is especially puzzling because of the studies which do find that more massive galaxies have more low-mass stars relative to high-mass stars. This finding motivates deep X-ray observations for a larger sample of galaxies, to measure the low-mass X-ray binary population in a wider range of galaxy masses. In the meantime, we’ll just have to keep guessing how much of the iceberg is lurking out of view.