Most stars form in clusters that contain a number of stars of different masses. This mass distribution of stars is called the Initial Mass Function, or IMF. The IMF is used in many areas of astronomy. It can tell us how gas collapses into stars, how a distant galaxy evolves, and where black holes might be lurking.

The easiest way to measure the IMF in a young star cluster is simply to count the number of forming stars of different masses. The problem with this method is that a few high-mass stars will completely outshine thousands of low-mass stars in the same cluster. So for distant clusters in our own galaxy, and for other galaxies, the low-mass stars which make up most of the total mass are basically invisible.

Today’s paper explores a new method for finding newborn low-mass stars. They show that observations of methyl alcohol, or methanol, in distant forming star clusters can be used to find stars too faint to see.

Methanol, along with many other molecules, is formed on grains of dust in the cold, dense gas where stars form. Methanol is freed from dust grains when the grains collide with fast moving gas particles. As forming stars pull in surrounding gas, they form an accretion disk which powers high-energy jets, blasting gas away from the star. These molecular outflows free lots of methanol from their host dust grains. The methanol can than be observed by millimeter telescopes such as ALMA. So observing methanol emission is a good way to trace molecular outflows and the forming stars which power them.

Why is it easier to find the molecular outflows from young low-mass stars than the stars themselves? The strength of the molecular outflow depends directly on the mass of the star, so a star with the mass of the Sun will have an outflow that is ten times weaker than the outflow from a 10 solar mass star. Compare this to the luminosity of the stars involved: the 10 solar mass star will outshine thousands of Suns!

A Simple Model and an Observation 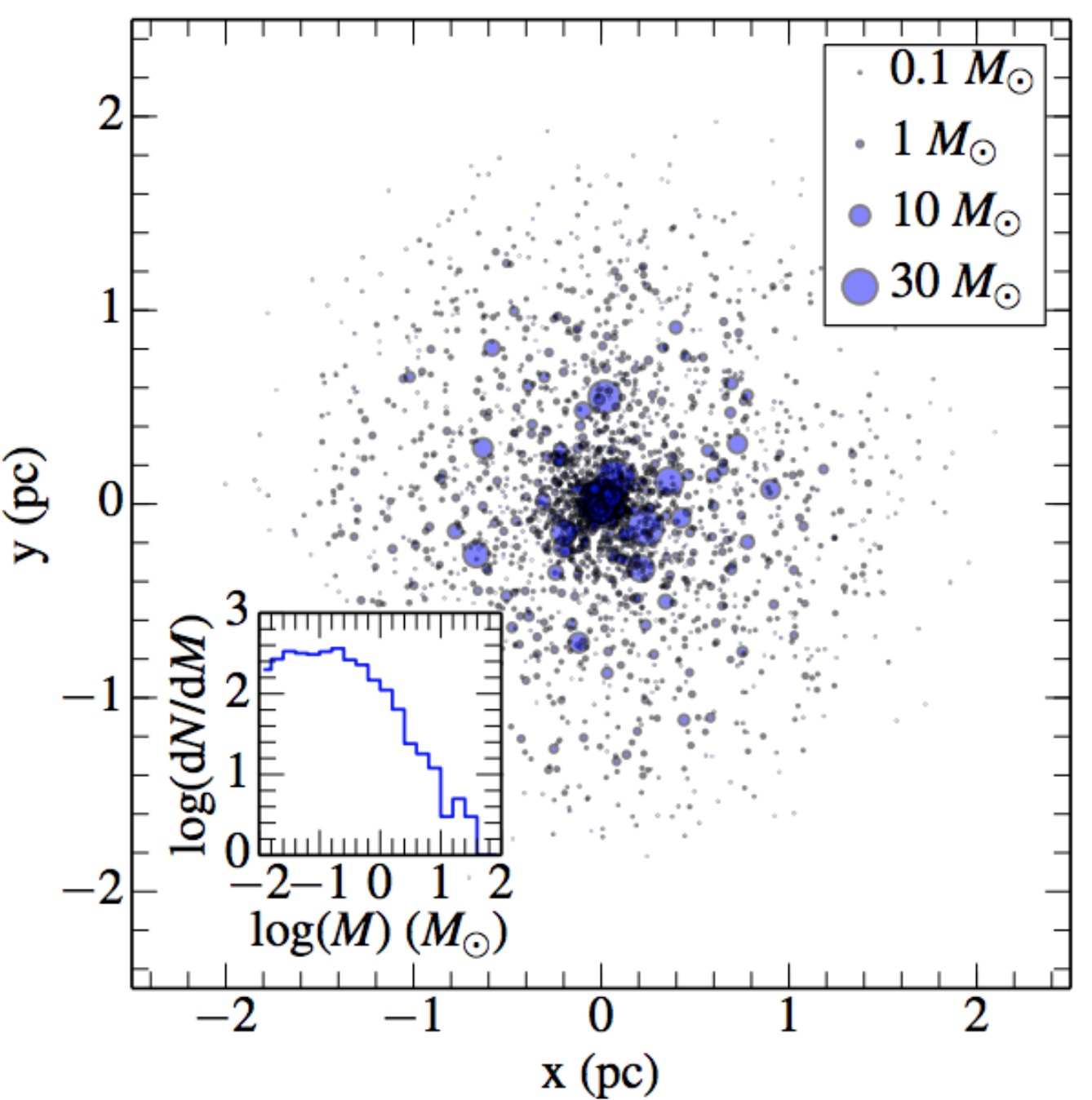 Figure 1: Modeled star cluster with 3000 stars. The inset shows the number of stars as a function of their mass. The mass of the stars is indicated by the size of their symbols.

To test this idea, the authors construct a very simple model of a star cluster. Shown in Figure 1, this model contains 3000 stars with a typical mass distribution. As in real clusters, the modeled cluster has only a few massive stars, but these would dominate the starlight coming from the cluster. The modeled stars are paired with molecular outflows guided by observations of methanol in nearby star clusters. The top of Figure 2 show what this modeled methanol emission would look like if observed by ALMA. The authors then compare this modeled methanol image to a real ALMA image of a distant cluster in the middle of Figure 2.

The comparison in Figure 2 shows that the simple model cluster with methanol outflows qualitatively matches a true observation of a forming cluster. This is important because most of the modeled methanol emission comes from low-mass stars, which are too faint to detect in the real cluster. By imaging the molecular outflows instead of the stars themselves, astronomers are able to cut down on the glare from the few most massive stars in a cluster and trace the true mass distribution. However, the modeled and true images do not match in detail, because the model is only a rough guess at what the true cluster might look like.

Where the Model Misses

In the bottom of Figure 2, the modeled and observed clusters are compared in detail. The extra methanol in the center of the real cluster comes from a massive molecular outflow, while the extra emission in the outskirts of the real cluster may be imaging noise. Between these two regions, the observed emission is twice as bright as in the model cluster. This could be due to a difference in age, IMF, size, or shape between the simple model and observed cluster, and these discrepancies will be accounted for in future sophisticated modeling. Nevertheless, the qualitative match between the model and observations is impressive because of the simplicity of the model.

As ALMA extends these observations to other galaxies, the emission of methanol could be combined with more sophisticated cluster models to measure the low-mass end of the initial mass function, a holy grail of star formation and galaxy evolution studies. Looking for these humble puffs of alcohol could give us insight into how the majority of stars in the universe are born and how their galaxies live and die.