The Explosions of Stars Wrapped in Hydrogen

The most luminous cosmic explosions come from the violent deaths of stars or supernovae. There is plenty of diversity among stars, so it’s not surprise that supernovae are also extremely diverse. The supernovae medley can arise from differences in the progenitor stars’ lives, environments or final moments.

Type II supernovae are those who show signs of hydrogen atoms. We see these atoms because the star takes on a “onion” profile before it collapses. In other words, the lighter elements (like hydrogen and helium) lie in outer shells of the star, while heavier elements (like iron and silicon) lie close to its core, like you can see in Figure 1. 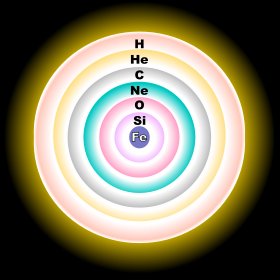 Figure 1: Near a star’s death, its elements congregate in layers, like an onion. Image from Wikipedia Commons.

The authors of today’s paper are interested in shedding light on what attributes of the star lead to the features we see in these types of supernovae, called Type II-L supernovae (where the “L” stands for “Linear”, as in linear decay).

The authors combine two popular programs to generate fake supernova light curves. First, they generate a progenitor star using the a program called MESAstar. Using this simulation, they’re able to change the amount of mass a star loses over its lifetime to beef-up that star’s outer hydrogen envelope. When their stars are ready to explode, they pass them off to another program known as STELLA. STELLA follows packets of atoms to see how they mix and heat during the supernova explosion. STELLA lets astronomers see these interactions at different frequencies, so they can map the results onto filters we can observe, like the V-band. Figure 2 shows some of the light curves the authors get from STELLA and how they compare with real Type II-L supernovae. 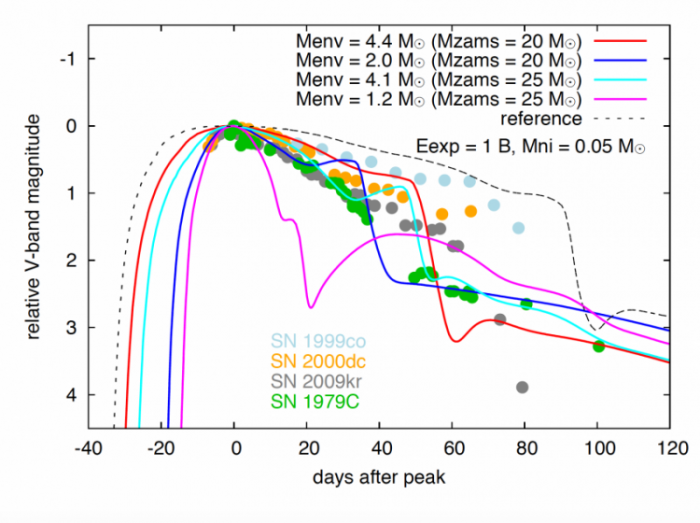 Figure 2: Theoretical Type II-L supernovae light curves with real light curves. The four colored lines represent four models used by the authors which change both the mass of the progenitor (M_ZAMS) and the mass of the hydrogen envelope (M_ENV). You can see that there is a bump right before the plateau drops off, especially in the case of the dark blue and teal curves. The data points are real supernovae.

Admittedly, these theoretical models don’t do a perfect job at recreating the observed characteristics of Type II-L supernovae. However, the rough similarities in shape suggest that Type II-L supernovae might come from progenitor stars with large hydrogen envelopes, as predicted. The authors focus on what they consider to be the most jarring dissimilarity between theory and observations: an extra “bump” or re-brightening in the light curves right before the plateau drops off. You can see this in Figure 2 around 30 days for the dark blue model. In more models, this bump is fairly large and noticeable for a large range of parameters, but this bump is not notably pronounced in observed supernovae.

The lack of this bump is itself a clue about the progenitors, because it rules out a lot of possibilities that produce the bump. In particular, the authors point out that larger progenitors would generally be brighter which washes out the bump. Additionally, larger progenitors mean that the hydrogen is less dense; this helps photons to escape more quickly and lead to a fast decline, which is often seen in Type II-L supernovae.

The new hypothesis that larger progenitors might lead to Type II-L supernovae shines light on the importance of catching supernovae early in their explosion. If we catch a supernova before its shock breaks free from the progenitor’s surface, we can definitively measure the progenitor’s size. Unfortunately, the “shock-breakout” happens before we see any other signs of the explosion, so we have to get incredibly lucky to catch such an event!