Forget Not the Gases

Stars, galaxies, and planets may be the most outstanding members of the Universe but the bulk of the Universe matter is hidden in tenuous plasmatic strands of gases (and to some extent, dust) that permeate the Universe. These gases started out fully ionized when the Universe began ~ 14 billion years ago and transitioned to a neutral state as the Universe expanded and cooled. The first stars and galaxies ushered in a new gas phase known as the Epoch of Reionization — where neutral gases were reionized by these first structures.

For decades, astronomers have been trying to pin down the actual sources that drove the Epoch of Reionization and we think it could be caused by two candidates: star formation and active galactic nuclei. An active galactic nucleus (AGN) is the central region of a galaxy powered by matter spiraling into a supermassive black hole, causing energetic jets to be launched into space. If AGNs are fuels of galactic jets, then newly-formed massive stars are UV (ultraviolet) bombs — they emit ionizing UV radiation and power stellar winds. The highly energetic nature of an AGN and star-formation are what make them attractive candidates to reionize the Universe. But how do we discriminate if an ionizing source is an AGN or a star-forming galaxy? Today’s paper attempts to answer this question.

Traditionally, astronomers separate an AGN from a star-forming galaxy using optical emission line ratios. This is most commonly done with the Baldwin-Philips-Terlevich or BPT diagram, which is an intensity ratio plot of [O III]/Hβ versus [NII]/Hα.  AGNs and star-forming galaxies occupy distinct regions in the BPT diagram due to differences in the spectral energy distribution (SED) of their ionizing radiation, as we will see very soon. For more information on the BPT diagram, check out these bite posts (astrobite1, astrobite2). Instead of looking for more optical line diagnostics, the authors searched for UV line ratios to separate an AGN from a star-forming galaxy. This is motivated by and in anticipation of future missions such as the James Webb Telescope which will collect UV spectra of thousands of galaxies from the early Universe. The authors built photoionization models of an AGN and a star-forming galaxy and compared the spectral emission lines produced by these models. Figure 1 shows the SED of the ionizing radiation produced by their models. The SED of an AGN overlaps with that of a star-forming galaxy up to ~ 30 eV (near-UV), beyond which the stellar SED cuts off abruptly. To some extent, emission lines in the far-UV should therefore be indicative of an AGN presence rather than a star-forming galaxy. 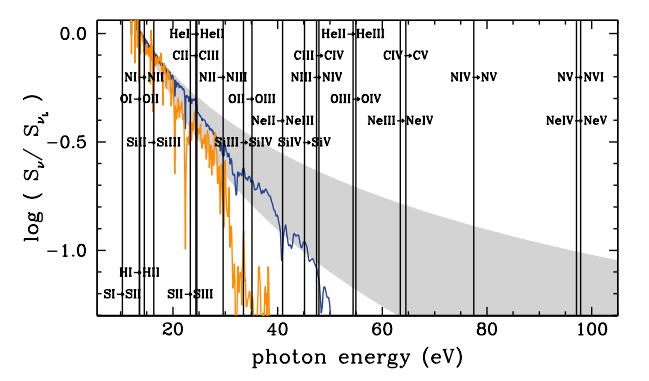 Figure 1 – Spectral energy distribution of the AGN and star-forming galaxy model. The grey shaded region indicates the SED of an AGN with various model parametrizations. The orange and blue lines are the SED of stellar populations with two different metallicities. Also marked in vertical lines are ionizing energies of various ion species. [Figure 1 in the paper]

Using their handy-dandy AGN and star-formation photoionization models, the authors checked that the emission lines ratios produced by their models agree with standard optical line-ratio diagnostic diagrams such as the BPT diagram. After passing this first check, they looked at various UV line ratios and discovered a handful of useful ones. The first are line ratios of He II, C IV, and C III] which are some of the most common UV lines in galaxy spectra that arise from the cooling of these ion species. AGNs and star-formation galaxies separate nicely in the line ratio diagram of C III]/He versus C IV/He II, as shown in Figure 2. Because AGNs and star-formation galaxies do not overlap in either axis in this diagram, each of the line ratios on its own can help discriminate between an AGN and a star-forming galaxy; together though, they provide unequivocal identification of the ionizing source. The second UV line ratio is Neon (Ne)-based ratios involving [Ne III], [Ne IV], and [Ne V], all of which require high ionizing energies unlikely to originate from star-formation. Figure 3 shows one Ne-based line ratios using [Ne IV] where one can see distinct islands of AGNs and star-forming galaxies. 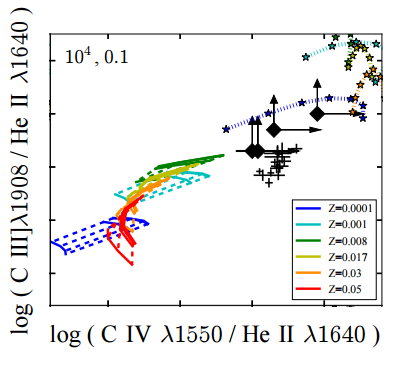 Figure 2 – Predicted emission line ratios of the AGN and star-forming galaxy models in the CIII]/He II vs. C IV/He II diagnostic diagram. The numbers in the plot indicate one set of gas density and dust-to-metal mass ratio values used in the models. Stars connected by dotted lines refer to star-forming galaxies while solid and dashed lines denote AGNs. Both are color-coded by metalliticies. Observed AGNs and star-forming galaxies are indicated by crosses and diamonds respectively. [Figure 6 (third figure of top panel) in the paper] 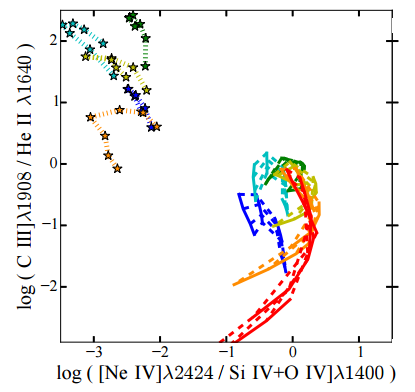 Are AGN and star-formation the only two processes that contribute to emission lines of a galaxy? The answer is no, because shocks (caused by interaction of jets and the ambient gas) can also ionize their surrounding and produce AGN-like emission lines. For instance, it can give rise to C III] and CIV lines and the ratio of these lines with He II (the diagnostic diagram in Figure 2) are predicted to be larger than that caused by an AGN. Shocks are nasty business and difficult to be framed to allow for an apple-to-apple comparison with AGN and star-formation models. The authors therefore did not account for shocks in their emission lines and deferred this task to a future study. Nevertheless, the new UV line diagnostics presented in this study are still valuable to help interpret emission spectra of ancient galaxies and constrain the dominant ionizing sources in the early Universe.