Welcome to the winter American Astronomical Society (AAS) meeting in Kissimmee! Several of us are attending the conference this year, and we will report highlights from each day here on astrobites. If you’d like to see more timely updates during the day, we encourage you to follow @astrobites on twitter or search the #aas227 hashtag. Be sure to come back to this post throughout the day as we update it with more content! 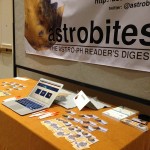 Things kicked off last night at our undergraduate reception booth. Thanks to all of you who stopped by — we were delighted to have so many people tell us that they already know about and use astrobites, and we were excited to introduce a new cohort of students at AAS to astrobites for the first time.

Tuesday morning was the official start of the meeting. Here are just a few of the talks and workshops astrobiters attended today.

The President of the AAS, aka our fearless leader Meg Urry kicked off the meeting this morning at the purely coffee powered hour of 8am this morning. She spoke about the importance of young astronomers at the meeting (here’s looking at you reader!) and also the importance of the new Working Group for Accessibility and Disabilities (aka WGAD pronounced like wicked) at the AAS. The Society has made extra effort this year to make the conference accessible to all, a message which was very well received by everyone in attendance.

We were definitely spoilt with the first Plenary lecture at this year’s conference – Alan Stern gave us a a review of the New Horizons mission of the Pluto Fly By (astrobites covered the mission back in July with this post). We were treated to beautiful images, wonderful results and a foray into geology.

Some awesome facts from the lecture that blew my mind:

Alan also spoke about the future of New Horizons – there is a new mission proposal for a fly by of a Kuiper Belt object 2014MU69  in Jan 2019 which should give us a better understanding of this icy frontier at the edge of the Solar System. As a parting gift Alan played the most gorgeously detailed fly over video of Pluto’s surface that had all in the room melting into their flip flops. It’s safe to say that the whole room is now Pluto-curious and wondering whether a change of discipline is in order!

This morning marked the first press conference of the meeting, covering some hot topics in black holes and exoplanets. 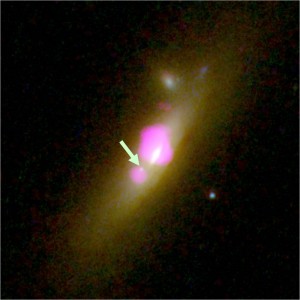 The first speaker was Julie Comerford (University of Colorado Boulder), who told us about SDSS J1126+2944, a galaxy that was shown by Chandra X-ray detections to contain not just one, but two supermassive black holes. This is a sign of a recent merger between two galaxies, which can result in one new, larger galaxy with two nuclei for a while. The second black hole is surrounded by only a small sphere of stars. This may be because the rest have been stripped away in the process of the merger — but it’s also possible that the second black hole is an elusive “intermediate mass black hole” of only 100-1,000,000 solar masses! Here’s the press release.

The second speaker was Eric Schlegel (University of Texas, San Antonio), who spoke about the galaxy NGC 5195. Eric discussed an interesting problem: we know that star formation ends in galaxies after a time, but the gas must be cleared out of the galaxy for the star formation to halt. What process does this? Schlegel’s collaboration found evidence in NGC 5195 for a “burping” supermassive black hole — the shock from the black hole’s outflow sweeps up the hydrogen gas and blows it out of the galactic center. Here’s the press release. 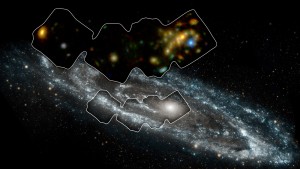 NuSTAR image of Andromeda, inset on a UV image by NASA’s Galaxy Evolution Explorer. Click for a better look! [NASA/JPL-Caltech/GSFC]

Next up was Daniel Wik (NASA/Goddard SFC), who discussed recent high-energy X-ray observations of Andromeda galaxy with NASA’s NuSTAR. As Wik described it, NuSTAR is like a CSI detective, working to identify what fraction of the compact remnants in X-ray binaries of Andromeda are neutron stars, and what fraction are black holes. Since X-ray binaries play a crucial role in heating gas in protogalaxies, shaping galaxy formation, it’s important that we learn more about this population and how it evolves over time. Here’s the press release.

The final speaker was grad student Samuel Grunblatt (University of Hawaii Institute for Astronomy), who spoke about measuring the mass of exoplanets around active stars. In radial velocity studies of exoplanets, a planet orbiting its star causes the star to “wobble”. This signal for an Earth-like planet is as tiny as 9 cm/s! Unfortunately, activity of the star can cause radial velocity noise of 1-10 m/s — so to detect Earth-like planets, we need to find a way of subtracting off the noise. Grunblatt talked about an intriguing new method for determining planet masses that controls for the signature of their host’s activity. Here’s his paper.

Stars I: Age, Rotation and Activity (by Meredith Rawls)
Three members of the Astrobites collaboration gave special 15-minute talks on their dissertations during this session, back-to-back. The first was Ruth Angus on deriving the ages of stars from their rotation, or gyrochronology. Next was Elisabeth Newton on the physics of low-mass M-dwarf stars, which combined rotation, metallicity, and radius measurements. The final speaker was Meredith Rawls on asteroseismology and binary modeling of red giants in eclipsing binaries. All three talks were well-received, and we were all relieved to have this milestone behind us. 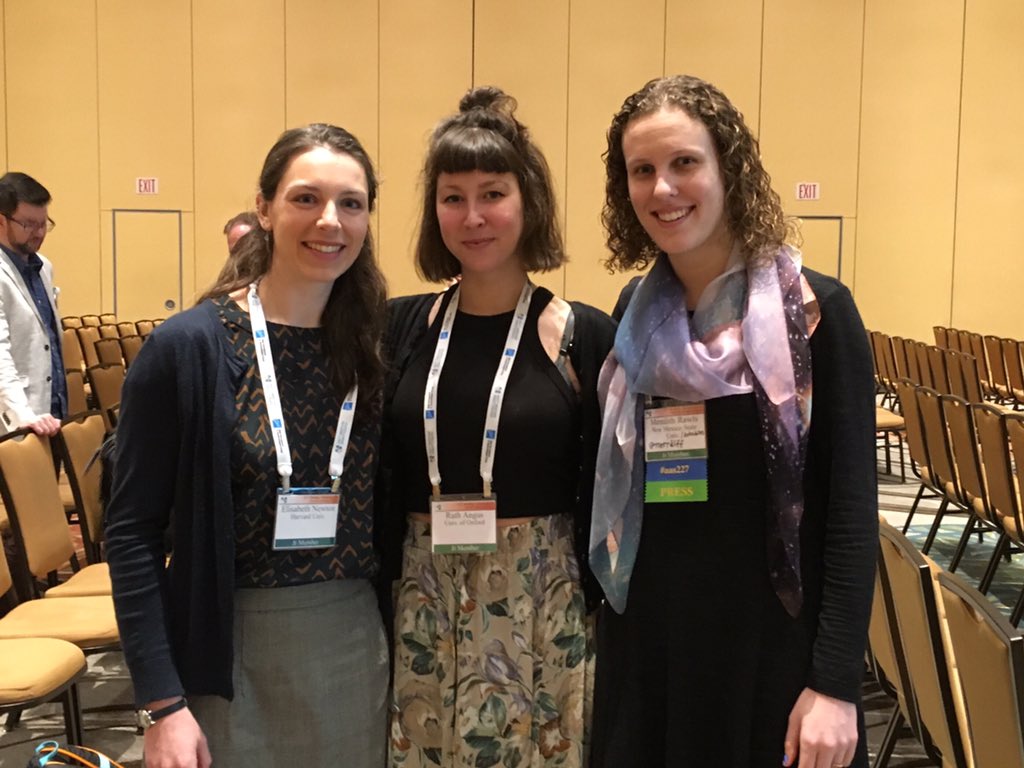 This year, the Annie Jump Cannon Award was given to Smadar Naoz, an assistant professor at UCLA. The Cannon Award is given every year to a young (less than five years since PhD), female astronomer for outstanding work in her field. Traditionally, the Cannon Award recipient delivers a lecture on her research, so this year we were lucky to see a dynamic and engaging talk by Smadar Naoz about her research in dynamical theory.

You may have heard the common career advice that you should focus on becoming “the” expert on one particular facet of astronomy: a particular type of object, an observational technique, a type of instrument, etc. Naoz has managed to follow that advice while still managing to study a huge range of astronomical topics, from exoplanets to cosmology. She studies hierarchical triples, systems of three gravitational bodies in which two of the bodies orbit one another very closely, while the third orbits the other two from a much greater distance. For example, a planet in a tight orbit around a star, with a brown dwarf orbiting hundreds of AU away, make up a hierarchical triple system. So does a system in which two black holes orbit each other closely, with a third black hole orbiting farther away. The physics of these systems are all the same, so by studying the equations that govern a hierarchical triple system, Naoz can study a huge variety of astronomical objects.

Wondering how Naoz found the error in Kozai? I happen to know she rederives all the equations in every paper she reads. Wow. #aas227

This work has applications in many different types of systems. For example, over the past decade, observers have discovered a large number of retrograde hot Jupiters, gas giant planets orbiting very close to their star, in the opposite direction from the star’s spin. Naoz showed that the new, correct Kozai-Lidov mechanism can explain the orbits of these exoplanets, because it increases the planet’s eccentricity until its orbit approaches very close to the star, and it flips the inclination into a retrograde orbit.

Naoz: A puzzle: how to explain retrograde planets? Kozai mechanism can do that! #aas227

Naoz also showed applications of the Kozai-Lidov mechanisms to dark matter halos around black holes, triple black hole systems, and so-called “blue stragglers”: main-sequence stars in clusters that are brighter and bluer than they should be. Her body of work is an excellent example of how theorists can adapt general physics theories to a wonderful variety of astronomical problems.

Harassment in the Astronomical Sciences Town Hall (by Caroline Morley)

The Town Hall on Harassment in the Astronomical Sciences involved a sobering panel discussion on the current state on workplace climate in astronomy and the current steps that the AAS and federal agencies are taking to improve it. Christina Richey kicked it off by presenting preliminary results from the CSWA Survey on workplace climate. This survey involved 426 participants, and reveals that many people, especially junior members of the field, experience harassment including both verbal and physical harassment. These results will be published this year. Next up, Dara Norman, a Councilor of the AAS and a member of the AAS Ethics Task Force, spoke about the proposed changes to the current AAS Ethics Statement. These changes will focus on corrective policies to improve the state of the field; they will solicit community feedback this Spring and vote on the changes at the Summer AAS meeting. Last, Jim Ulvestad, representing the federal agencies including NSF, NASA, and the DOE, spoke about the current policies for reporting to federal funding agencies. He reminds us that if an institution accepts money from the federal government, they are required by law to follow laws such as Title VI (covering racial harassment) and Title IX (covering sexual harassment), and that breaches can be reported to the funding agency.

This afternoon breakout session included a drinking-from-the-firehose set of short talks that covered everything from source-code management and software testing to building communities that create sustainable code. First, Kenza Arraki discussed software such as Git to do version control to keep track of code changes. (Version Control is my (science) New Years Resolution, so I was happy to learn that there is a CodeAcademy tutorial for Git!). Next up, Adrian Price-Whelan described the merits of software testing and suggests that we actually do “Test-driven development” where we write tests for the code first, then write code, run tests and debug until tests all pass. Erik Tollerud spoke on “Why Document code and how you might convince yourself to do so” (documenting code is another good science New Years Resolution!) The most important rule is to always document as you code because you won’t ever go back! Bruce Berriman described the best practices for code release, including, importantly, licensing it and describing it well (with tutorials, examples). Matthew Turk reminded us the importance of building community around code development. Robert Nemiroff ended the talks with a discussion of what to do with “dead” codes. The lowest bar? Put it in your Dropbox and share it with your collaborators and students!

For more info on all of these topics and more, consider attending a Software Carpentry or SciCoder workshop.