Title: A Neptune-sized Exoplanet Consistent with a Pure Rock Composition

What are planets made of? The planets of the Solar system can be neatly divided into two groups: small, rocky, inner planets and large gas giants. Despite the huge variety of planetary systems now being discovered, this split between small=rock and large=gas appears to be holding, with the dividing line between rocky and gas planets found at around 1.6 Earth radii.

However, it seems that whenever we have a fact about exoplanets nailed down, an exception will quickly crop up. The authors of today’s paper claim to have spotted a planet over twice the diameter of the Earth, made from solid rock.

The planet, was spotted by the resurrected Kepler space telescope in its K2 mission. Kepler measures the light coming from the stars in its field of view, looking for the tiny dips caused by a planet crossing in front of its star (a transit). The amount of light blocked tells you how big the planet is compared with the star, so if you know the size of the star, you know the size of the planet.

Kepler’s measurement of the light coming from BD+20594 between February and April 2015. The dips in light caused by a transiting planet are marked by the red arrows. Comparing the depth of the transit to the radius of the star gives the radius of the planet, in this case 2.2 Earth radii.

Between February and April 2015, Kepler spotted two identical transits across the star BD+20594, 42 days apart. A quick spectrum allowed the authors to find the radii of the star and candidate planet. BD+20594 was found to be very similar in size to the Sun, with a 2.2 Earth radii candidate planet.

The next step was a series of observations to confirm if this was indeed a planet, or if the dips in light were being caused by something else. This process has been covered extensively by these bites, so I wont go into details. Suffice to say that the authors find a 99.7% probability that the transits were indeed caused by a planet. Planets are named as (star name)b, c etc in order of discovery, so this new world became BD+20594b.

One of the final confirmations was  a measurement of BD+20594b’s mass. This was done using the High Accuracy Radial velocity Planet Searcher, or HARPS, at the La Silla observatory in Chile. HARPS takes spectra of the star as the planet orbits around it. The small movements of the star caused by the planet’s gravity result in tiny Doppler shifts in the spectrum. The bigger the shift, the higher the mass of the planet.

Based on similar sized planets, the authors expected BD+20594b to have a mass around 7 times that of the Earth, give or take an Earth or two. But the HARPS measurements showed that its mass was more than twice that, 16 times the mass of the Earth. Combined with the radius measured from the transit, this means that BD+20594b has a density of 7.89 g cm-3. This beats out Earth (5.5 g cm-3) and leaves Neptune‘s 1.6 g cm-3 well behind. 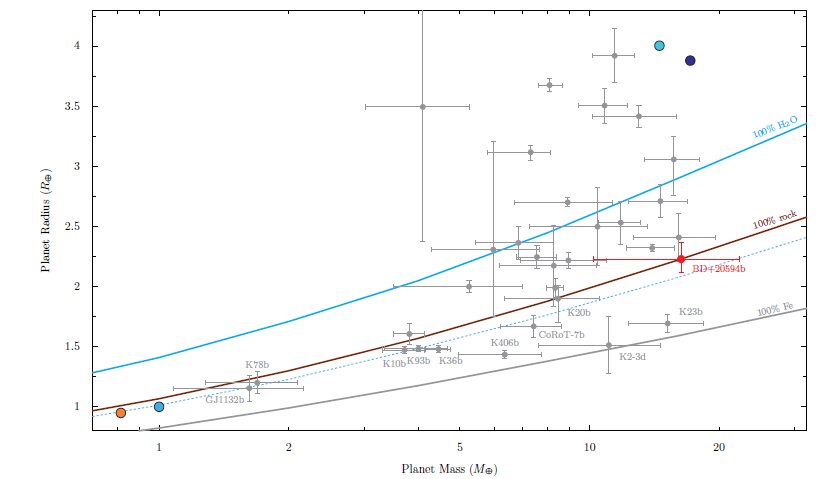 A selection of small exoplanets, with the x-axis showing the mass and y-axis the radius. The coloured circles show, from left to right, Venus, Earth, Uranus and Neptune. BD+20594b is plotted in red. The curved lines show the chemical compositions needed to produce the densities seen in various planets.

The high density means that BD+20594b cannot be made mainly of gas, like Neptune, or indeed the majority of planets greater than 1.6 Earth radii. Neither does it fit an Earth-like composition, an iron core surrounded by an MgSiO3 (rock) mantle. Instead, as the figure shows, BD+20594b is best fitted by a 100% MgSiO3 composition, rock all of the way down.

Such a large rock is unheard of in the Solar system, but it’s not totally unique in the wider galaxy. Long-time readers of astrobites may, in fact, be finding this familiar. This bite reports on Kepler 10c, another planet with a very similar size and mass. It’s the point just above and to the left of BD+20594b. Curiously, they also have similar, short orbital periods, which could be one of the reasons for their unusual composition.

The authors finish by suggesting that BD+20594b is an ideal laboratory to test planetary formation models, exploring how to make a pure MgSiO3 world. Luckily, its host star is relatively bright, so future observations may reveal more details of this strange planet. Until then, BD+20594b will remain a strong contender for the title of largest known rock.