Imagine the first planets. Not the Solar System’s first — not even the Milky Way’s first. Picture the first pale blue (or black…) dot drifting alone in the cosmos. This seems like a dream more appropriate for Douglas Adams than scientists, but envisioning the first planet is exactly what today’s paper aims to do.

Children of the Oldest Stars

The oldest planets should call the oldest stars Home Sweet Home, because planets form from the same debris as their host stars. The oldest stars in our universe (known as Population III stars) have very few heavy elements compared to other stars. We say that they have “low metallicity.” This is because the heavy elements still need to be synthesized by supernovae, the explosions of massive stars. In the most extreme case, the oldest stars are entirely made up of hydrogen and helium and live very fast lives, so we don’t expect these fireballs to host any planets.

Instead, Mashian & Loeb hypothesize that planets can form around second generation stars. Specifically, if a first star has a weak supernova, it only loses its outer, light layers (with elements no heavier than magnesium). This light, but enriched, material can accumulate and form a Carbon Enriched Metal Poor (CEMP) star.

Can planets form around CEMP stars, and, if so, where would they form? In general, planets form while an accretion disk of debris is still around the baby host star. The lifetime of this disk is related to the star’s metallicity, with lowest metallicity stars having shortest-lived disks. The disks with short lifetimes create planets with smaller orbital radii. In CEMP stars, the planets can form as far out as 20 AU if the host star is rich in carbon. This is a bit closer in than Neptune, the Sun’s farthest planet, sitting at 30 AU.

Now that we know that these planets can form, we need to figure out what they’ll look like. Astronomers like to describe this in terms of the mass-radius relationship: for a given radius, what does the mass of the planet need to be? We all know that carbon can take on many forms: amorphous grains, graphite (like your pencil) or even diamond! The authors take these phases into account and construct carbon planets with diamond cores. Their derived mass-radius relationship is shown in Figure 1, below. Interestingly, these diamond planets can only reach a maximum radius of 4 times that of Earth. This is about three times smaller than Jupiter-sized planets, but the authors find that this is large enough to be detected using the transit method. 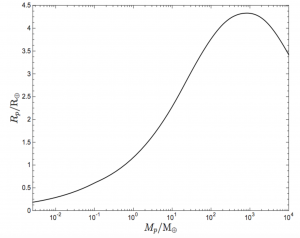 Figure 1: The theoretical mass-radius relationship for a planet made of pure carbon.