Looking into the far reaches of the observable Universe is like rewinding a very long video tape and gazing into the distant past. Since light has a speed limit, it takes time to reach us from the very distant sources, and since the Universe is expanding, the observed light is also stretched relative to when it was emitted – which is very useful for astronomers, as we can use the amount by which it has been stretched to figure out how far away a distant object is. This is known as the cosmological redshift.

The Most Distant Galaxy


The main protagonist in today’s paper was found using the Wide Field Camera 3 on-board the Hubble Space Telescope; its name: GN-z11, and yes, it has its own wikipedia page! Oesch et al were recently able to identify this galaxy, at a redshift of just over 11, meaning that the light we observe from it left the galaxy GN-z11 when the Universe was a mere 400 million years old, and had been travelling for over 13.3 billion years before reaching our telescopes. While being the most distant galaxy ever discovered should be enough, this object was also found to be extremely luminous (hence making it possible to discover it at such an enormous distance in the first place): according to the authors of today’s paper, GN-z11 is approximately 3 times more luminous than a typical galaxy at redshifts 7-8, i.e. one that is closer than GN-z11 and hence would be expected to be brighter! This makes objects like GN-z11 extremely rare, and begs the question of how such a galaxy might have formed, and what it might evolve into?

To answer these questions, the authors make use of a galaxy formation model to investigate whether such models would predict the existence of such extreme systems as GN-z11, and if so, what their properties, origins and possible fates are. By studying a volume of modelled cosmological space comparable to that probed for the discovery of GN-z11, they find two distant galaxies with ultraviolet brightnesses similar to those of GN-z11. This suggests that such luminous galaxies may in, fact, be more common during the early phases of galaxy formation than had previously been thought. 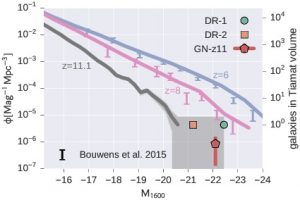 Fig. 1: The ultraviolet luminosity function, indicating how many galaxies of a certain brightness can be found in a given volume at redshifts 6 (blue line), 8 (magenta) and 11.1 (grey). The x-axis indicates the brightness in UV (increasing to the right), while the y-axis gives a measure for how many galaxies there are within a certain volume of a given brightness). The luminosities of the two model analogue galaxies, DR-1 and DR-2, are indicated by a green circle and orange square respectively, while the location of GN-z11 is shown by the red pentagon. The locations and uncertainties of previous observations are show on both the redshift 6 and 8 lines. The good agreement between the observed values and the model predictions demonstrates the success of the model, and gives the authors confidence in the data for the two model analogue galaxies.

Finding these model galaxies also allowed the authors to use them as analogues to learn more about the properties of GN-z11. But first they needed to check whether the Universe in their models was actually reproducing the observations in the real world. To do this, the authors compared how many bright galaxies the model predicted at lower redshifts, i.e. in the more recent history of the Universe, to how many had been observed. Finding good agreement between the observational data and the model results (see the magenta and blue lines in Fig. 1), the authors felt confident that they could trust the results of the very distant redshift 11 models. Hence they selected the two brightest model galaxies at redshift 11, calling them DR-1 and DR-2 (see Fig. 2). Both showed good agreement with the observational measurements of GN-z11 and hence by learning about their origins and eventual fate, it should be possible to learn more about GN-z11 itself. DR-1 and DR-2 are the two most massive galaxies in the simulations (at redshift ~11) and live in the two most massive subhaloes. They are rare outliers from the majority of the modelled galaxy population, not only in terms of their brightness, but also with their stellar masses and star formation rates.

Fig. 2: The histories of the two model galaxies, DR-1 and DR-2 (green line and orange dashed line respectively) between redshifts 18 and 6, spanning the cosmic time period when the Universe was between 200 million and 1 billion years old. The available data points for GN-z11 are indicated at the appropriate redshift/time by a red pentagon. From top to bottom, the panels show: absolute ultraviolet magnitude, star formation rates, stellar mass, subhalo mass, fraction of cold gas within the galaxy, radius of the galaxy, mass ratios of any mergers. For comparison, thin grey lines and dots are also shown to indicate the histories of the ten next-most-luminous galaxies selected at redshift 11.

Several interesting questions remain: how do such massive systems for so rapidly? The age of the Universe at redshift 11 is a mere few hundred million years which does not give these galaxies a lot of time to assemble themselves. And is their extreme brightness only a transient feature, e.g. due to a recent merger or other event? And if not, then how can the level of star formation required to produce such high numbers of new, ultraviolet luminous stars be sustained? This is where the simulated galaxies came in handy.

By studying the simulations, the authors could determine that the subhalo in which DR-1 resides grew by a factor of 5 in just 65 million years in the time period immediately before redshift 11, resulting in a stellar mass growth of the galaxy by a factor of 9 during this period. Additionally, it appears that the analogue galaxies’ extreme brightness is not a transient feature but instead that their star formation rates and ultraviolet luminosities remain high, or even increase during their evolution. This is puzzling, however; high star formation rates should result in large amounts of energy from supernova being fed into the interstellar medium, which heats it and ejects cold gas from the galaxy – thereby curtailing star formation in a negative feedback cycle. What the authors found for the analogue galaxies, though, is that they have fewer such depletion events. This is likely due to the large reservoirs of cold gas available to these galaxies, which means that only a small fraction of the available material is used up during any one episode of star formation. Additionally, mergers are known to trigger rapid star formation which could deplete such gas reservoirs. However, the authors find that neither DR-1 nor DR-2 has experienced a major merger.

Fast-forwarding the tape of cosmic evolution simulations to a time when the Universe was approximately 1 billion years old allows the authors to investigate what might become of galaxies like GN-z11. Interestingly, they find that both DR-1 and DR-2 continue to grow steadily, and they remain both massive and luminous. However, while they were clear outliers – booming at redshift 11 – by the time the Universe reaches 1 billion years of age, they are no longer among the brightest or most massive objects in the simulations.

And so it appears that, even though GN-z11 was outstanding during the Universe’s early years, it is likely merely the progenitor of a more common massive galaxy in the slightly more evolved Universe…