With more and more exoplanets being discovered that border on potential habitability in terms of their size and temperature, the need to measure their atmospheres to test that habitability becomes more imperative.  Astronomers have been trying to measure exoplanet atmospheres for more than a decade with very mixed results.  Almost all of these studies have focused on hot Jupiters (typically 1,000-2,000 K), with GJ 1214 b, a cooler, lower mass planet (~550 K and 6.6 Earth masses) being a notable exception (and also with mixed results).  This new study, led by John Southworth of Keele University, marks one of the most ambitious attempts at measuring an exoplanet’s atmosphere:  a planet with just 1.6 times the mass of Earth at a temperature of just 600 K.

GJ 1132 is an M-dwarf star, the lowest mass and most abundant kind of star in the universe, and is one of the closest stars to the Sun known to host a planet at just 39 light-years away.  While M-dwarfs are usually too faint for meaningful atmospheric follow-up, GJ 1132’s close proximity makes it a prime candidate for observing its planet’s atmosphere.  Because the planet, GJ 1132 b, transits its star, its radius was previously measured to be just a bit larger than Earth’s (1.16 times larger).  Its mass has also been measured to be 1.6 times more massive than Earth using the Doppler technique.

The planetary transits allow for astronomers to measure its atmosphere.  If the planet has an atmosphere that blocks light at only certain wavelengths, the planet will appear larger at those wavelengths.  And so, the authors of this paper observed GJ 1132 b for 9 transits in several photometric bandpasses (grizJHK) from the optical to the near-infrared using the GROND instrument at the MPG 2.2m telescope at ESO La Silla, Chile, although some observations in the near-infrared bands were removed due to their low quality. The measured radius of the planet in each bandpass is shown below in Figure 1. 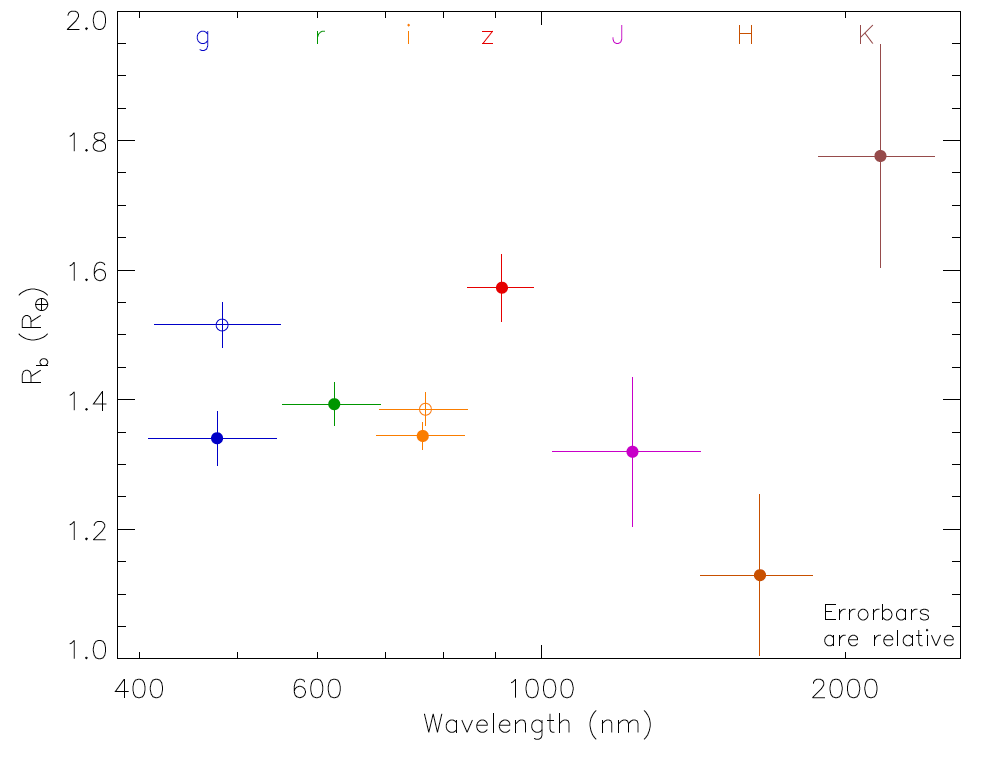 Figure 1: Transmission spectrum of GJ 1132 b.  The solid circles are measurements of the planet’s radius in each bandpass from the GROND instrument in Chile.  The two open circles are measurements from an earlier paper with another instrument.  Looking at just the new data (solid points), the planet’s radius appears to be larger in the z-band (by 4 standard deviations), implying there is something in the atmosphere absorbing light in this region.  (The HK-bands are a bit off, but within two standard deviations of the griJ-bands.)

Six of the bandpasses show a consistent planetary radius, but one bandpass shows a much larger radius.  This indicates that there is some molecule in the atmosphere that is absorbing in just this region of the spectrum.  The z-band is of particular interest because this is the only band of the seven in which water strongly absorbs.  The authors then used a computer model to estimate the interior and atmospheric composition of the planet.

The new planetary model changes the surface radius of the planet from the previously measured value of 1.16 Earth radii to 1.35 Earth radii, which significantly changes the density and therefore the inferred composition of the planet.  An exact Earth duplicate (1/3 iron, 2/3 silicates) is ruled out in the data.  However, a rocky planet with a higher percentage of silicates relative to iron is not ruled out, but neither is it very likely.

The more favorable interpretation are those that include a large mass of water in the planet.  This is consistent with the inferred presence of water vapor in the atmosphere from the z-band measurements.  Because the modeling is driven almost exclusively by a single data point, the authors refrain from an exhaustive analysis of the planet’s atmospheric composition, but provide a more cursory analysis suggesting that 1-10% of the atmosphere is made up of water vapor.

Exoplanet atmospheric characterization is notoriously difficult from the ground.  The authors suggest the gold standard instrument, the WFC3 camera on board the Hubble Space Telescope, be used to examine this planet more closely in the z-band. This could result in the confirmation of water in the atmosphere, the presence of an unknown absorber in the atmosphere, or even possibly find that this study’s z-band measurement was spurious.  What is incredible though is that exoplanet atmospheric characterization, once the realm of only hot Jupiters, has made its way to down to nearly Earth-sized planets.