Joining the Milky Way galactic system comes at a cost – groups of galaxies that have been “friends” for billions of years may be torn apart. On large scales, small galaxies joining the Milky Way system seems like a peaceful process, leaving the Milky Way unfazed, but when you zoom in, you see that these small galaxies are struggling to survive the fall and that groups of galactic friends are broken up. (Learn more about galaxy collisions in this astrobite!) Today’s paper examines whether these groups of friends are able to hang onto each other throughout the tumultuous journey of falling into a galaxy.

First, let’s review the origin of these friendships. Astrophysicists have developed a general understanding of how galactic systems form. They know dark matter clumps together via gravity to form the halos that host galaxies and galaxy clusters. This is known as structure formation, where “structure” is all the galaxies in the Universe, and the web of dark matter that contains them.

So what do we know about structure formation? All the stars and galaxies and the web of dark matter that surrounds them started as tiny quantum fluctuations in the early Universe. Over time these fluctuations grew to form regions of high density (like galaxies). Small, dense regions, with masses around that of a small galaxy, were the first to succumb to their self-gravitation and collapse in on themselves. These smaller clumps of dark matter were then pulled together gravitationally to form larger clumps and these clumps were pulled together to form even larger clumps. This process of hierarchical structure formation causes small galaxies to come together and form larger galaxies, galaxies to form galaxy clusters, and galaxy clusters to form superclusters. This is also why big galaxies are orbited by smaller galaxies, which are orbited by smaller galaxies, which are orbited by smaller galaxies…

Our galaxy is like any other system of “hierarchical structure.” Looking up the galactic scale, the Milky Way is part of the Local Group, along with our sister galaxy Andromeda and several smaller galaxies. The Local Group plus nearby groups and clusters of galaxies make up the Virgo Supercluster. (For more on our local supercluster check out this astrobite.)

The same is true on smaller scales – the Milky Way is orbited by dozens of detected (and many yet undetected!) smaller satellite galaxies (or satellites) (Fig. 1). These small galaxies can have their own systems of mini-satellites before falling into the Milky Way.

These are the friendships we are worried about.

Have any of these mini-satellite systems survived the trip into the Milky Way or has our galaxy torn them apart. How far down does the hierarchical structure of the Milky Way go? 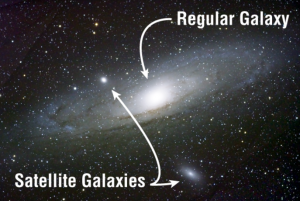 The Milky Way’s largest satellite is the Large Magellanic Cloud (LMC), at 1/10 times the mass of the Milky Way. The LMC has a friend, the Small Magellanic Cloud (SMC), just a few times less massive, but the question is whether the LMC brought any other (smaller) satellite friends to the party and if so, did these friendships survive the few billion year trip?

These smaller galaxies are very dark and most are invisible to even our most powerful telescopes. Recent optical surveys like the Sloan Digital Sky Survey (SDSS) and, more recently, the Dark Energy Survey (DES) have searched the sky for faint systems of stars that are clustered together into one of these satellites within the Milky Way system. Now we know of dozens of low-mass Milky Way satellites and some of them are awfully close to the LMC. Combining observations of the Milky Way satellites with simulations of similar systems allows us to decipher how our galaxy evolved over time to reach its current state. 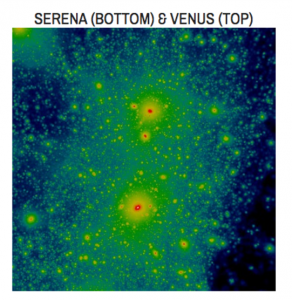 Figure 2: ELVIS is a simulation of dark matter particles that interact only through gravity. Small dark matter fluctuations collapse to form clumps of dark matter, pictured here as bright spots. The red dots represent a pair of large galaxies (named Serena and Venus) with similar properties to the Milky Way and Andromeda. Simulations like this can be compared to observations of the Milky Way, Andromeda, and their satellite galaxies to learn about the evolution of dark matter and galactic structures. Credit: ELVIS.

In today’s paper, Alis Deason and her co-authors do exactly this – they compare simulations and observations to determine whether the LMC has its own system of satellite galaxies.

They use the ELVIS (Exploring the Local Volume in Simulations) dark matter simulation to study the history of galaxies like the Milky Way and the LMC. The simulation includes pairs of galaxies resembling the Milky Way and Andromeda, with similar mass, separation, and relative velocity (named after famous pairs like Serena and Venus, Hera and Zeus, and Hamilton and Burr!). Each of these pairs have their own satellites and snapshots of each system are recorded at various times throughout their evolution (Fig. 2). 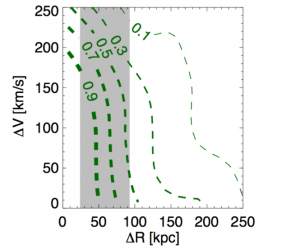 Figure 3: This figure shows the probability of a satellite galaxy being a mini-satellite of a galaxy like the LMC. The x-axis shows the separation between the potential mini-satellite and the LMC (ΔR), and the y-axis shows the relative velocity (ΔV) between the two galaxies. Each dashed green line is a certain probability. The shaded gray band is the range of ΔR between 8 real satellite galaxies of the Milky Way and the LMC. Credit: Fig. 7 in the paper.

The survival of LMC mini-satellite friendships would tell us two things. First, that it’s possible for mini-galactic systems to exist within galaxies like the Milky Way. Second, that the LMC joined the Milky Way relatively recently (in galaxy terms) – about 2 billion years ago. We have more information about the Milky Way than any other galactic system, so deciphering the complicated history of the satellites and mini-satellites in our own backyard provides important and detailed insight into how structure formation and evolution occurs throughout the Universe.