One mechanism to rule all magnetic bodies

Title: A common origin of magnetism from planets to white dwarfs

If you have ever used a compass, you know the Earth has a magnetic field. That’s lucky for us, because this field protects us from highly energetic particles that could make life on Earth quite difficult, like it is on Mars (although NASA might have a solution). The Sun has a magnetic field too, which is beautifully pictured on the featured image. The explanation for these fields is a dynamo effect: in short, ionised matter circling inside the Sun and the Earth generates the field. This explanation holds for most stars in which we detect a magnetic field. White dwarf stars, the most common end-point of stellar evolution (which makes them extremely useful in understanding the history of the Galaxy and even of the Universe), seemed to be an exception. They can present unusually high magnetic fields, up to a 100 million times the field of the Sun! The explanation for such colossal fields is still an open question. The authors of today’s paper present a possible solution by cleverly making use of already well-known astrophysical mechanisms.

Magnetism in white dwarfs: how common is it?

In the second scenario, magnetic white dwarfs occur as the result of the evolution of binary systems. In this case, the magnetic field is amplified by a dynamo either in the common envelope phase or in the hot corona produced by the merger of two white dwarfs. Again, population synthesis models suggest that the number of white dwarfs produced by this channel cannot explain what we find observationally.

Last but not least, in the third scenario, the magnetic field is generated inside the convective envelope formed as a white dwarf cools down. The problem with this explanation is that it cannot account for the strength of the observed fields. Therefore, we need a more efficient mechanism!

Another characteristic of most white dwarfs is that, as they cool, their nucleus will eventually undergo a phase transition and crystallise, releasing energy without changing the star’s temperature significantly. This process provides extra energy that can boost the dynamo effect and lead to higher fields. A similar effect occurs for the Earth and Jupiter (where the convective dynamos are powered by cooling and chemical segregation in their interiors) as well as for T Tauri stars and rapidly rotating M dwarfs. The authors estimated the dynamo energy density for a number of white dwarfs with known fields taking that into account, as shown on Figure 1. They noted that this boost in energy is sufficient to explain the observed fields in most white dwarfs with hydrogen-dominated atmospheres. This implies that the magnetic fields observed in planets, non-evolved stars and white dwarfs all share a common origin! 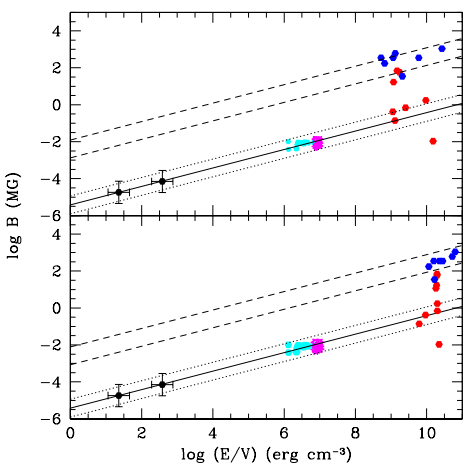 Another cool thing about this mechanism is that it doesn’t exclude other possibilities. On the contrary, it alleviates one of the major drawbacks of the other two hypotheses, which didn’t predict a sufficient number of magnetic white dwarfs. As a bonus, the authors offer an explanation for the fact that most white dwarfs that do not fit into their mechanism are hydrogen-deficient: they are indeed formed by the merger of two white dwarfs, as suggested by scenario two. During their coalescence, the temperatures reached are so high that the hydrogen in the outer layers is burned. So, using already known mechanisms, the authors may have finally solved the mystery of the highly magnetic white dwarfs: no need to reinvent the wheel!

Expected or not – It’s all the same physics