Title: A machine learns to predict the stability of tightly packed planetary systems

Scientists are impatient people. Nobody has time to make an entire universe and watch it evolve for thirteen billion years to see what happens (do you have any idea how many emails you could answer in thirteen billion years?!), so instead, scientists simulate a smaller version that only takes a few months to mature.* Nobody has time to comb by hand through four years’ worth of Kepler telescope data to look for telltale planet shadows, so instead, scientists write a computer program that finds planets automatically. Nobody has time to manually rearrange the inside of a telescope to observe new stuff every five minutes, so scientists build robots to do it instead.

All of the above strategies work because computers are much faster than humans at doing small, repetitive tasks. But sometimes, even computers are too slow. For example, predicting the fate of a set of planets orbiting around a star can take a computer a couple of weeks. Nothing the computer is doing is complicated–it’s just tracking the motions of the planets and the star, subject to each others’ gravity. But it has to calculate the gravitational forces in question trillions of times, and, as former Federal Reserve Chair Alan Greenspan likes to say, trillions is lots.

Today’s authors wondered: Is there a faster way to figure out what will happen to those planets?

“What will happen?” is kind of a broad question, and broad questions don’t lend themselves to speedy answers. So the authors decided to take their essay prompt and turn it into a true-or-false: Will a given set of planets remain stable for a long time, or not? (“Or not” encompasses a few possibilities–maybe two of the planets collide with each other, or one crashes into the star, or one gets kicked out of the system entirely.)

Planet scientists care about stability in their planet simulations because it’s a way of checking that the simulations match reality. Stable planetary systems last a long time, and unstable systems fall apart quickly. The odds of seeing an unstable exoplanet system in real life are slim, just like the odds of looking up from your desk and catching your coworker mid-spilling coffee on his keyboard. So if you’re trying to match your simulation to a real-life, observed system of planets, your simulation should probably be stable.

So how did the authors get a quick answer to “stable or not?” They handed their computer a practice test with an answer key. The practice test was a set of 5,000 three-planet systems on which they had already run a full-blown, weeks-long simulation to test for stability, so they had answers (“stable” or “unstable”) in hand. The computer’s job was to take those 5,000 systems, together with their answers, and look for patterns: do the stable systems have things in common? Are there clues in the properties of the planets that hint that a system will ultimately be stable?

First, they only let the computer search for patterns in the bare minimum of data necessary to describe the planets–the shapes of their orbits, their distances from the star, and their distances from each other. These numbers are the equivalent of a stick-figure sketch of each planetary system. The computer did okay with this information, but it was never very confident in assigning an answer of “stable” (see Figure 1, top panel).

So they decided to help the computer out some more: instead of giving it just a bare-bones description of each system, they let it see the results of a short simulation of the planets’ orbits (one that only ran for a few minutes, instead of weeks). The bottom panel of Figure 1 shows the results: major improvement! The computer did much better at confidently sorting the unstable and stable systems. 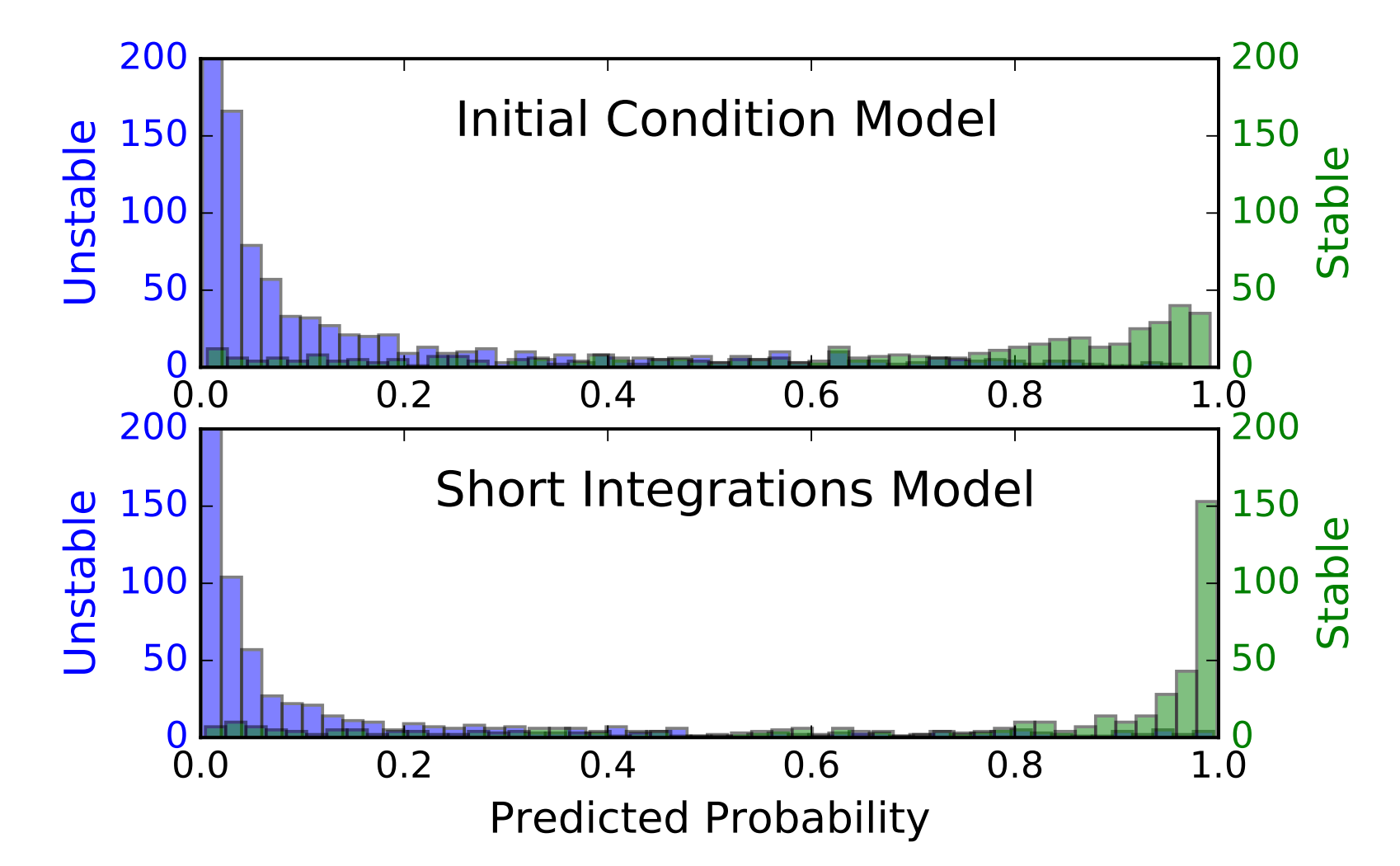 Figure 1: The computer’s test results, given either a bare-bones description of each planetary system (upper panel) or the results of a short stability simulation (lower panel). The colors indicate the correct answer–green means that the systems are genuinely stable, and blue means unstable. “Predicted probability” on the x-axis indicates the computer’s certainty–a value close to 0 means the computer is confident that the system is unstable, and a value close to 1 means the computer is confident the system is stable. A value in the middle indicates that the computer was uncertain. To get an A+ on this test, the computer would have to predict 0 for every blue system and 1 for every green system.

What does it mean?

This result isn’t just a cool demonstration of computers’ ability to learn and predict on their own. It also gives us some new insight into what makes planetary systems stable or unstable. The authors investigated why the computer made the predictions it did, and noticed that strong variation in the middle planet’s distance from the star, resulting from the three planets tugging on each other gravitationally, was a good clue that the system would ultimately lose stability. Impatience gets results!

*When run on a couple of the world’s most powerful supercomputers, working together.