Title: Gravitational-wave signatures of exotic compact objects and of quantum corrections at the horizon scale

An exotic compact object (ECO) consists of matter that is not electrons, neutrons, protons or muons.  There have been numerous “exotic” astronomical objects proposed (for example, quark stars, boson stars and preon stars) but none of these hypothetical stars have been detected. Up until recently, detecting objects that do not radiate electromagnetically has been challenging for astronomers and only accomplished indirectly. With the advent of the emerging field of gravitational wave astronomy, we have the ability to directly detect ECOs (if they exist) – we just need to know the gravitational wave “smoking gun” to look for!

But why study ECOs at all, given we don’t know if they exist?  Even as purely hypothetical objects, they are useful as tractable toy models for testing consequences of general relativity. In addition, they could play a role in solving some of the biggest mysteries in the Universe – boson stars, for example, have been considered as potential dark matter candidates (see here). And if they do exist, we need to be able to know how to distinguish their gravitational wave signals from those of objects that have already been observed.

This brings us to today’s astrobite. Firstly, the authors simulate bouncing a wave packet off the gravitational potential of several different models of ECOs and observe that, qualitatively, ultra-compact objects have a universal signature in their response. Secondly, the authors investigate the complementary problem of boson stars colliding. Boson stars are chosen because they are ECOs whose formation can potentially occur in dynamical scenarios and they are relatively simple to treat numerically.


Figure 1 compares the distortion of spacetime due to the gravitational fields of the Sun, a neutron star and a black hole; what we see is that if the same mass is packed into a more compact region, the surrounding gravitational forces are more extreme. In some sense, ECOs are halfway between conventional compact objects that are made of matter (such as neutron stars) and black holes (where all the mass has been compacted into a singular point through gravitational collapse). ECOs are not point-like, but have the potential to be compact enough to exhibit some black-hole-like properties. For example,  ECOs can have photon spheres, which only exist around ultra-compact objects. 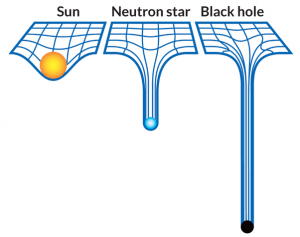 Figure 1: The spacetime around very massive objects like stars and black holes is distorted due to their gravitational field. If the same amount of mass is packed into a smaller region of space, there will be a more significant effect on the gravitational field and consequently a more distorted region of space time surrounding them.  Image source: https://medium.com/starts-with-a-bang/astroquizzical-how-does-gravity-escape-from-a-black-hole-5ef156bf048d

A photon sphere is a region of space around an object (typically a black hole, but potentially also ECOs) where photons travel in orbits (see Figure 2). It is typically unstable for a black hole and small perturbations will push the photon out of orbit. However, ECOs do not have event horizons, which are boundaries around a black hole beyond which light cannot escape. 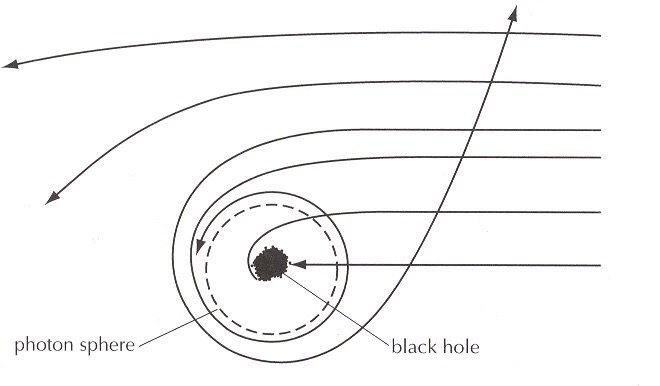 When you hit a bell, it vibrates; the surface of the bell oscillates between different configurations until the vibration is damped and the ringing stops. Similarly if you “hit” a black hole by bouncing another mass off of it,  it “rings” until it is stationary again (see Figure 3). A black hole is a cosmic bell that will “ring” by oscillating in shape between a elongated sphere and a flattened sphere. The damping of the ringing by the emission of gravitational waves is called ringdown. Orbits of a photon around a black hole spacetime can be understood in terms of an “effective potential” whose peaks (troughs) are locations of unstable (stable) photon spheres. There is a close correspondence between this potential and  the potential felt by the vibrations of the black hole (discussed in detail here).

Figure 3: After a perturbation, the black hole “rings” by changing shape, oscillating between an elongated and flattened spheroid. It produces gravitational waves during this “ringdown” phase until it is stationary once more. Image source: http://slideplayer.com/slide/4179737/

To study the ringdown signal, the authors simulate bouncing a wave packet off both a black hole and an ECO. The initial ringdown of the ECO is identical to the black hole. This initial signal corresponds to the “ringing” of the photon sphere and is rapidly damped. Crucially, ECOs have a stellar surface rather than an event horizon, meaning they can also have an inner photon sphere that is stable. The main burst of radiation can then reflect off the potential barrier at the inner photon sphere (the potential barrier shape is given in Figure 4) rather than getting absorbed at the event horizon. 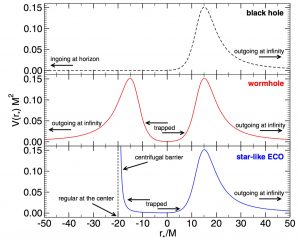 .  Therefore, the characteristic signature of an ultra-compact object without an event horizon is a series of distorted echoes following well after the initial ringdown signal has died away. This is exactly the effect we see in Figure 5. 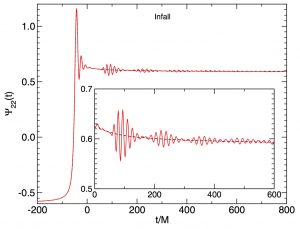 Figure 5: Gravitational waveform for the infall of a test particle into a black hole (dotted black line) and an ECO (red line).  The initial ringdown caused by the ringing of the outer photon sphere are present for both the black hole and ECO signal. The pulse then travels inward and is either absorbed by the event horizon (in the black hole case) or bounces off the inner photon sphere in the ECO case, leading to subsequent echoes in the signal. Figure 3 in paper.

Now, we are ready to tackle the next topic of the paper: colliding boson stars. This scenario is complementary to the echo signatures found in the ringdown of ECOs; here the purpose is to investigate gravitational waves produced by fairly viable ECOs (boson stars) rather than more contrived objects such as wormholes or gravastars. The authors answer the question of whether boson stars can mimic black holes in different scenarios.

Boson stars are in general much less compact than black holes and therefore only very finely-tuned boson stars will actually have a photon sphere, so the echo effects discussed in the previous section are only marginally relevant here. Nonetheless, boson star collisions exhibit distinctive and sometimes quite exotic behaviour that is qualitatively different to black hole collisions with the same masses. In certain cases, the two stars actually annihilate during the merger, while in other scenarios there is a repulsive force between the stars so they bounce back and forth until they lose all their kinetic energy and settle back into a binary.

The phenomena discussed in this paper are quite exotic. However, it is important to remember that gravitational wave astronomy gives us, more than ever before, the opportunity for exciting and unexpected discoveries which challenge known physics – and we need to be proactive in looking for them!