On the fourth of January this year, another gravitational wave signal from the coalesence of two black holes (GW170104) was detected by LIGO. (Read more about the detection here.) Interestingly, the newest detection unveiled clues about the spin of the individual black holes: at least one of the spins was likely in the opposite direction to the orbital motion.  The model in this paper gives us insight into the precise way the final black hole spin relates to properties of the individual black holes.

In recent years, numerical simulations have advanced our understanding of the merging of two black holes. However, numerical relativity simulations are computationally demanding and time-intensive, so a simple recipe for computing the properties of the final black hole is very useful! The authors of today’s paper have developed exactly such a recipe from first principles. They assume that the mass and angular momentum of the system are conserved in the merger and ringdown phases, but otherwise make no explicit assumptions from numerical results. The approach is simple yet quite accurate; predictions using this expression are consistent with numerical simulations. The success of this  recipe reveals that the fundamental dynamics of binary black hole spacetimes can be encapsulated by quite simple descriptions. 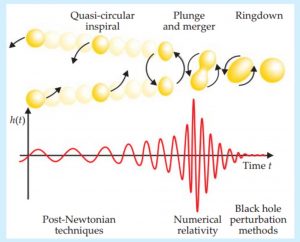 Figure 1: Gravitational wave schematic. (Top) The three phases of coalescence: inspiral, the merger, and the ringdown. (Bottom) The amplitude of the emitted gravitational waves for the coalescence. Source: Baumgarte and Shapiro, 2011.

The stages of the black hole coalescence are depicted in Figure 1. The first stage is the inspiral which consists of a gradually shrinking orbit that is close to adiabatic (i.e. the process is approximately in an equilibrium state at every step). Mainly post-Newtonian methods are used to treat this stage (i.e. Newtonian physics with some modifications to account for relativistic effects). The innermost stable circular orbit (ISCO) is the last complete orbit before the transition to the merger stage in which the two black holes combine into one. The black hole undergoes very complicated dynamics during this stage which can only be dealt with numerically. Immediately following the merger is the ringdown stage in which the now single black hole will “ring” by oscillating in shape. To treat this stage, one has to apply perturbation methods to a single black hole solution. Gravitational wave signals associated with ringdown are discussed in this astrobite.

A Kerr black hole can be completely described simply by two parameters, the mass

and the spin parameter

The phenomenological description presented in this paper is motivated by two natural observations about black hole binary evolution: (i) the inspiral evolution is essentially adiabatic, and (ii) the total mass and angular momentum of the system change only slightly throughout the merger and ringdown phases. More specifically, the following assumptions are made:

1. The mass of the system is approximately conserved because the total radiated energy during the merger is small.

2. The contribution to the final total angular momentum due to the individual black hole spins will be approximately determined by the initial spins because radiation falling into the black holes affects the spins by a small amount. 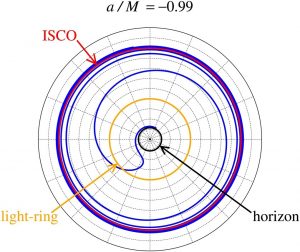 Figure 3: Trajectory of a point mass plunging into a Kerr black hole that is spinning. Source: https://www.aei.mpg.de/1783615/Source_Modeling

Similar approaches in the literature yield the same results for extreme mass-ratio cases. However, crucially, the equation presented in this paper can be used for general mass ratios, including the equal mass case, and encorporates both orbital and individual spin angular momenta in uncovering the final black hole spin. This is significant: in general relativity, solving the two body problem with extreme mass ratios isn’t too difficult (you can use the Schwarzschild solution) but when the masses of the two objects have similar masses, it is a much more difficult problem to solve (generally you need to solve it numerically).

An interesting example to consider is where the individual black hole spins are not aligned with the initial orbital angular momentum – you can get a “spin flip”! 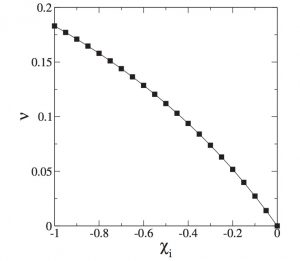 Figure 5: Spins of the black holes to achieve a final non-spinning black hole.

is the mass ratio and

When the orbital angular momentum of the system is not aligned with the individual black hole spins, the final black hole spin can be in a completely different direction to the original individual spins; i.e. when two black holes merge, the spin “flips” (see Figure 4).

Figure 4: A spin flip. Two black holes with their spins

in the opposite direction to the orbital angular momentum

of the system coalesce to form a black hole. The final black hole spin

is antialigned with the initial black hole spins.  Source: https://briankoberlein.com/2015/04/12/spin-flip/

We can use the expression derived in this paper to uncover configurations likely to yield interesting dynamical behavior, as well as for constructing templates to be used within simulations.