We’re pretty sure that the Universe has undergone two phases of accelerated expansion. Firstly, during a period known as inflation immediately after the Big Bang, and secondly – right now! It was realised in the 90s that the Universe is expanding today, and that it is doing so at an increasing rate. Measuring exactly how fast it’s expanding has opened up one of the biggest disagreements in cosmology today: the Hubble tension*. The Hubble constant, which is the quantity that tells us how fast the Universe is expanding today, has been measured in two different ways… with two different results.

While some would argue that the answers aren’t different enough to warrant worrying about too much (yet), many people are starting to believe that there is a real problem brewing. It could be that experimental uncertainties haven’t been accounted for fully, or, it could be that we’re missing something in our current model of cosmology and that we need new physics to explain it. Today’s authors offer an explanation for the discrepancy by suggesting the existence of a third phase of accelerated expansion in the early Universe. Messing around with how the Universe expanded at early times is a fragile task, but they’ve found a model that seems to do the trick.

The initial discovery that the Universe is expanding at an accelerated rate relied on observations of supernovae. Distant supernovae were much dimmer than expected, meaning they were further away than could be possible if the Universe’s expansion wasn’t accelerating. See here for an astrobite on how this works. The most up-to-date value of the Hubble constant from this method is approximately 72.

It is also possible to obtain a value for the Hubble constant by studying the Cosmic Microwave Background (CMB). At about a redshift of 1100, the Universe had cooled enough so that most of the photons had stopped scattering off electrons because they’d all become bound to protons and formed neutral hydrogen. The photons were then free to travel through the Universe unimpeded – this radiation is known as the CMB. Knowing exactly when the photons started streaming towards us and how far they’ve travelled can tell us about the expansion of the Universe today. You also have to assume that our standard cosmological model is correct, meaning that the Universe is made up of dark matter, baryons, photons, neutrinos, and the cosmological constant. The inferred value of the Hubble constant from this method is smaller, around 69.

The difference between the two results is quantified as a 3.6 sigma tension – this means that there’s less than a 0.02% chance that the values only differ due to random statistical uncertainty. (See here for a great explanation of statistical significance.)

How can we fix it?

We need something to bring these values closer together, since they’re supposed to have measured exactly the same thing. If there’s nothing wrong with either of the experiments or the analyses of the datasets, which has been and is still being investigated by lots of people, then it might be that our standard cosmological model isn’t right. There have been lots of ideas on how to alter it, but today’s paper looks at adding in a third phase of accelerated expansion. This is in addition to the initial phase of inflation and today’s expansion which we attribute to dark energy.

They keep all the usual stuff, but then they introduce an extra field (you can think of it like an extra species of particle). This field has a constant energy density in the early universe and drives an extra phase of expansion at early times which they call ‘early dark energy’. It then decays away and leaves the late-time expansion that’s going on today unchanged. This helps to reduce the tension because it decreases the sound horizon, which is the distance that sound could have travelled in the time between the Big Bang and when the CMB photons started streaming towards us at redshift 1100. The value of the Hubble constant is directly related to the sound horizon, and therefore the inferred value for the Hubble constant can be increased if the sound horizon is decreased. 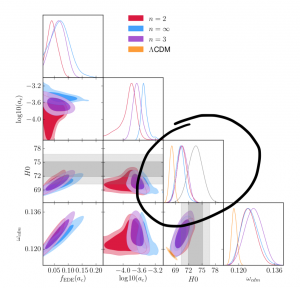 Figure 1: the circled plot shows the most likely values of the Hubble constant from the supernovae observations in grey, CMB observations in yellow, and for three variants of early dark energy model in pink, blue and purple. Figure from today’s paper.

The authors run a statistical analysis to find the most likely value of the Hubble constant given various setups of their early dark energy model. They find that the Hubble constant is pushed up to around 70, higher than the usual CMB prediction and closer to the supernova value. The positions of the peaks in the circled diagram of figure 1 show the most likely values of the Hubble constant; these curves are also known as the posterior distributions. The measurement from supernovae observations is shown in grey, the CMB measurement is shown in yellow, and three different varieties of early dark energy models are shown in blue, pink and purple. The peaks from the early dark energy models are nestled between the two discrepant results from the CMB and supernovae, demonstrating that the tension can be decreased, although not eliminated, with this idea. Since it doesn’t require too many new ingredients, it’s an attractive alternative to our current standard model of cosmology.

As new methods begin to become available for measuring the Hubble constant in different ways, we’ll be better able to confirm whether or not we really do need new ideas to explain how the Universe is expanding. We’ll need to use sophisticated statistical analyses to compare all the new theoretical ideas, like the one in today’s paper, with the standard cosmological model in order to pin down exactly what could be derailing our current picture of cosmology.

*See here, here and here for other astrobiters bitten by the Hubble tension bug.