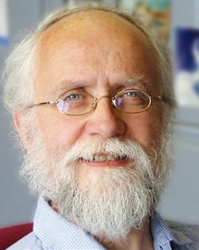 “Can we turn molecules into tools for astronomers?”

This is one of the questions that Xander Tielens, Professor of Physics and Chemistry at Leiden University, has spent his career trying to answer. We have known for decades that there are chemical compounds floating around interstellar space, ranging from water to large organic molecules. However, their complex spectral signatures make them a challenging avenue for studying the interstellar medium and intragalactic processes. Tielens, who is the LAD Plenary Speaker at AAS 234 this month, studies these molecules from all angles. His research group observes them in space, models them on the computer, and probes them in the lab in order to sharpen interstellar molecules into research tools.

For these compounds to be useful, we first need to build up a molecular inventory. This is done by comparing laboratory experiments with space observations, which Tielens describes as analogous to identifying a thief from their fingerprints by comparing them to a database of collected prints. Molecular transitions are the fingerprints of a molecule: they are specific to each molecule, so when we observe certain transitions in spectra we should be able to uniquely determine the molecule that produced them. However, we don’t have a comprehensive database of all of these transitions, so researchers do a bit of detective work to narrow down the possible molecules that could produce such transitions, and then measure these in the laboratory. By comparing the observed transitions to this database of molecular fingerprints, we can identify unknown molecules in space.

This process recently identified its first big suspect, C60+, or ionized Buckminsterfullerene. This soccer ball-shaped carbon molecule was first detected in planetary nebulae in 2010, and this finding was just confirmed by the Hubble Space Telescope in April. “So that is very exciting, and that also gives us ideas of where we should look for the other fingerprints,” Tielens says.

Researchers have now identified many molecular species in space. We can use these as galactic thermometers and barometers, quite literal tools to measure the temperature and pressure of a galaxy. “We use these molecules to study the conditions where they are, and that’s because the molecules are sensitive to their environment,” Tielens says. The local conditions affect the spectral signatures of these molecules, so we can calibrate the tools by looking at the signatures in places where we know the conditions. Then when we observe the same molecules in distant galaxies, we can infer the properties of the regions they reside in.

Organic compounds in space are also key to answering one of science’s biggest questions: what is the origin of life on Earth? One plausible theory is that amino acids, the organic building blocks of life, hitched a ride on a meteorite that crashed into our planet. To test this, we study other meteorites and see that they indeed carry a wide variety of amino acids. By looking at their isotopic signatures, we can trace their history and find that they likely have interstellar origins. We can also use these compounds to study life on other planets. We observe the absorption spectra of exoplanet atmospheres to determine which molecules are present. Zooming out, these molecules must have come from the regions where these planets formed, so we can start to build a map of where the organic inventory is stored.

The near-future launch of the James Webb Space Telescope will be able to probe these questions in unprecedented detail. “James Webb is going to open up the near and mid-infrared window where all the informational transitions are for most molecules,” Tielens says. In particular, the telescope will be able to study polycyclic aromatic hydrocarbons (PAHs), which contain 10% of the carbon in the universe. These molecules are also common on Earth, released in your car exhaust or when you burn meat on a barbecue—though JWST will be able to search for PAHs a bit beyond your backyard. Tielens says that it will “find these molecules not only in the local galaxies, but all the way out to a redshift of 3 or so, where most of the stars were formed and galaxies were assembled.” This will be critical to building our understanding of early galaxy formation.

Tielens has nurtured an interest in astronomy since growing up in the era of lunar missions. A self-described “moon child,” he recalls, “It was a time where of course you were going into physics, of course you went into space, of course you went into astronomy… it was just a very exciting time.” Tielens, who is from the Netherlands, completed his undergraduate degree in astronomy at Leiden University. A molecular astrophysics group had just started there and had an open position, so he grabbed this opportunity and stayed for his PhD. “There are so many opportunities and you just have to keep your eyes open and you step into it and you will have an interesting career,” he says.

Throughout the rest of his career, Tielens has hopped back and forth between the Netherlands and the United States. After graduating he went to NASA Ames in California to work on the Kuiper Airborne Observatory, a precursor to SOFIA. Tielens knew nothing about the project going in, but he chose the position due to the people. “It’s very important to do fun things with fun people,” he advises young astronomers. “Make sure that you pick a group or an advisor with which it is fun to work.”

A decade and a half later, Tielens returned to Holland to become a professor at Leiden University, as well as the project scientist for the HIFI instrument on the Herschel telescope. He subsequently went back to NASA Ames for a position as the SOFIA project scientist. He finally settled back in Leiden, though he now also holds an adjunct professorship at the University of Maryland.

Tielens has chosen paths that have taken him across the world and through many significant research areas. But he believes that these choices aren’t all-important. “My advice is that it doesn’t really matter which path you take,” he says. “Make sure that you have interest in it, that you like it, you can apply yourself, and all will be right.”

Learn more at Tielens’s plenary titled “Dust Grains, Ices, and Surface Processes in the Interstellar Medium” on Tuesday, June 11 at 8:30am at #AAS234.