The Sun is the single most important astrophysical object for life on Earth. Its light is the basis for nearly all the food and energy on Earth; its heat provides just the right amount of warmth to keep Earth’s oceans liquid. Even the passage of time has been historically marked by the Sun—the radioactive decay of atoms might be a more fundamental unit of time, but it is the Sun’s motion relative to the Earth that defines the natural timescales of life. 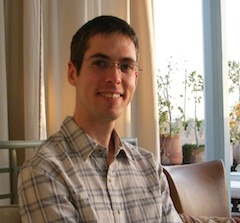 Yet despite centuries of human observations, the Sun still harbors some secrets. “You tend to think that the Sun is the nearest astrophysical object,” says Anthony Yeates, so we should understand it pretty well. “But […] it’s even more complicated than we thought.”

Yeates, an associate professor from Durham University, studies the structure and evolution of the solar magnetic field, one of the most enduring mysteries about the Sun. As this year’s winner of the Karen Harvey Prize, he will give a prize lecture at #AAS234 addressing the question “Where Do Solar Eruptions Come From?” The answer to this question—perhaps unsurprisingly, given Yeates’ area of expertise—has to do with the Sun’s magnetic field.

Unfortunately, the solar magnetic field cannot be directly observed. So, Yeates says, “you need numerical models to try to get a handle on what it actually looks like.” These models aim to piece together a patchwork of indirect observations. For example, we can directly measure the solar magnetic field at the location of Earth, then try to extrapolate it back to the Sun, where we can compare with data about the Sun’s surface obtained from instruments like the Solar Dynamics Observatory.

Patterns from the solar magnetic field can also imprint themselves on the Sun’s corona (lower atmosphere), leading to observable energetic phenomena. One such phenomenon is a so-called coronal mass ejection (CME), which occurs when a huge quantity of solar plasma is released from the Sun. The energetic output from a CME—up to billions of tons of material!—can, when directly aimed at the Earth, produce geomagnetic storms that disrupt navigational systems, GPS, and power grids.

CMEs are thought to result from twists in the solar magnetic field. As the Sun’s magnetic field twists into helical structures, it builds up energy until the energy is somehow forcefully released—like a rubber band deformed to the point of snapping. 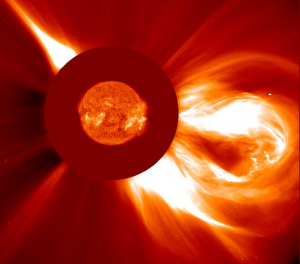 However, there are still open questions about how this happens, especially on small scales. How are these twists (“magnetic helicity”) injected into the corona? Where are they stored? How does magnetic helicity become concentrated enough to cause an eruption?

These are the questions that Yeates hopes to answer: “We’re trying to develop mathematical tools for identifying where within the coronal magnetic field you have interesting structure: where the magnetic field is tangled, twisted, where energy is stored.” If we can understand this, Yeates says, we may be able to predict where and when CMEs can occur—and even their internal structure, which may have a significant impact on how strongly they impact the Earth’s magnetic field.

Yeates has always enjoyed using mathematics as a tool; as an undergraduate, he studied applied mathematics, originally intending to pursue solid mechanics or fluid mechanics. But when he applied for PhD programs in the UK, he found a research project on the Sun that “seemed interesting,” and he took the opportunity.

“I just drifted into it by accident,” Yeates laughs. “I didn’t know anything about the Sun, I had no life-long ambition to study anything like this. […] I never even studied physics, as such.” He now finds that his mathematical training helps give him another point of view when solving astrophysical problems, though he does think it’s important to understand the background physics.

When asked what advice he’d give to more junior researchers, Yeates says, “Keep better notes! Write down literally everything you do.” And, true to his roots as a mathematician, he adds, “Never believe anything you calculate. Assume you made a mistake… because nine times out of ten, you did make a mistake! No one does things correctly the first time.”

If you’re interested in hearing more about how Prof. Yeates applies mathematics to understand the Sun’s magnetic field, come check out his plenary talk at 4:30PM on Wednesday, June 12 at #AAS234!