Name that movie: twins, separated at birth, have remarkably different life experiences, before eventually finding each other in an emotionally charged reunion.

Of course, there are quite a few valid answers to this question (IMDB lists 35 movies or shows tagged as “Twins Separated at Birth.” 35!!). But whether your initial reaction was to think of Lindsay Lohan, Arnold Schwarzenegger and Danny Devito, or Luke Skywalker and Princess Leia, it should come as no surprise that many a Hollywood actor has played the role of a long-lost twin. In today’s paper, we learn that Hollywood stars are not the only stars in the universe to have performed this dance.

Like humans, the stars in our night sky are also typically born into large extended families. Star formation occurs in dense molecular clouds, in which many stars are typically born around the same time. If two stars are born close enough together to be gravitationally bound to each other, they form a binary system (or a triple system if there are three, etc.). These systems are so common that roughly half of the stars in our galaxy have companions, or siblings.

Figure 1. Left: an example of a binary system with a mass ratio of 0.81 (adapted from Figure 2 in today’s paper). Right: an artist’s impression of a circumbinary disk with two stars at its center (credit: NASA/JPL-Caltech/T. Pyle).

Binaries are interesting to astrophysicists for many reasons: they lead to the creation of unique types of stars, they can be the precursors of Type Ia supernovae, and they can emit gravitational waves, to name a few examples. Given how common they are, the question of whether they can host habitable planets is also of high interest in both science and science fiction. Finally, studying the characteristics of binary systems in our galaxy (and in other galaxies) is one way that astrophysicists learn about the varied environments and conditions in which stars are born.

Two of the most important parameters for studying binaries are their separation and the ratio of the two stars’ masses. Studying the statistics of these two quantities is central to every single one of the topics mentioned above. One particularly intriguing feature is a surprisingly large excess of equal-mass binaries, sometimes referred to as “twin systems.”

Are we biased towards twins?

An abrupt excess of binaries with mass ratios between 0.95 and 1 was first noticed many decades ago, but it has frequently been tagged as an artifact of observational biases. In other words, equal mass binaries are easier to observe than binary systems with two stars of different masses, and it was believed that correcting for this selection bias might remove the excess altogether. Today’s paper makes use of data from the Gaia mission to provide a conclusive answer to this.

In a previous publication, the authors of today’s paper constructed a large catalog of binaries using data from the Gaia mission. All told, this catalog includes a whopping 42,000 binaries found within 200 parsecs of the Sun. The excess of twin systems stands out very clearly in this catalog, as seen in the left-hand panel of Figure 2. Just to be sure that this is truly a statistically significant excess and not selection bias, the authors make a comparable plot of stars that happen to be aligned next to each other, but are not actually in binary systems. These chance alignments suffer from the same observational bias as the actual binaries. The authors argue that comparing these two plots side-by-side is more than sufficient to prove that the twin excess is a real phenomenon and not a statistical anomaly (check out Figure 2 to see if you agree).

Figure 2. The difference in G-band magnitude between the two members of genuine binary systems (left) compared with the difference for stars that happen to appear next to each other from our vantage point (right). The difference in G-band magnitude is a proxy for the mass ratio, with no difference being equivalent to an equal-mass binary. The x-axis represents the observed angular separation between the stars — when combined with the distance to the binary, this can be used to calculate the true physical separation between the two stars (shown in Figure 3). The chance alignments suffer from the same observational biases as the real binaries, yet a clear excess of twins is apparent in the left panel (adapted from Figure 4 in today’s paper).

Having put this question to rest, the authors turn their attention to an even more intriguing feature: it appears that the twin excess extends out to extremely large separations between the two stars in the binary system, up to 10,000 AU, as shown in Figure 3 (for reference, that’s 250 times bigger than the distance between the Sun and Pluto). 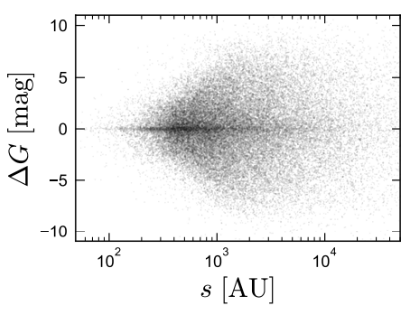 Figure 3. The G-band magnitude difference of the two stars in binary systems (a proxy for their mass ratio) plotted against their physical separation. The excess of twins is apparent out to approximately 10,000 AU (adapted from Figure 3 in today’s paper).

Several theories can explain why there might be an excess of twin systems, the most likely being accretion from a circumbinary disk (see also the right-hand panel of Figure 1). But none of these theories allow for the formation of twin systems at such large separations.

So how did the twins get separated?

The authors posit that the twin stars may have been born close together, in line with current theories of twin system formation, and were subsequently pulled away from each other by the gravitational influence of other stars and gas clouds. By building toy models of twin systems, they demonstrate how this may lead to the observed fraction of twin systems across a range of binary separations. At the same time, the authors acknowledge that their models fall short of explaining many of the observed features, and most importantly how the mass of the twin systems vary as a function of separation.

Twins thus provide some exciting clues about the turbulent dynamical environments in which stars are born, but the picture is still far from complete. Just like in many classic movies, it looks like we’ll have to wait for the sequel to understand the full story behind what separated these stellar twins at birth.