Status: [Open access on arXiv], Accepted for publication in MNRAS

Without Jupiter, the solar system might be a vastly different place. Our largest planetary companion is thought to be responsible for everything from clearing out planet-building material near the sun to throwing Neptune and Uranus to the outer solar system to delivering water to the Earth. Given the crucial role that this behemoth played in shaping our solar system, a natural question to ask is how important gas giants are for building planets around other stars.

Unfortunately, we can’t just look at stars with terrestrial planets and then determine which of those also have something resembling Jupiter. With the exception of a rather exotic and unexpected subclass of close-in giant planets known as hot Jupiters, most gas giants take far too long to orbit their host stars to be easily detectable. To illustrate this point, consider how an observer from outside the solar system would detect Jupiter. There are two ways to do this. The first involves gradually watching the sun redshift and blueshift as Jupiter’s gravity tugs on it over the course of an orbit. Alternatively, if you are extremely lucky, Jupiter might pass between you and the sun, producing a momentary dimming of the sun’s light. Both of these methods require you to potentially wait for Jupiter to complete nearly an entire orbit around the sun. This would take 12 years! Unless you’re continuously watching the sun for over a decade, you probably wouldn’t ever detect this giant.

Although extrasolar terrestrial planets are found using these same methods, the problem mentioned above is not quite so severe because these types of worlds tend to lie close to their star. This means that they complete an orbit fairly quickly and so you don’t have to wait long for them to alter the star’s light. For this reason, any large-scale exoplanet survey such as Kepler or TESS will tend to detect mostly close-in planets, while missing most of the longer period ones. This brings us to the goal of today’s paper, which is to determine how the presence of a gas giant, many of which lie on wide, long period orbits, affects the distribution of inner terrestrial worlds during the planet formation process. With a better understanding of this connection, it might be possible to use the measured properties of the more easily detectable terrestrial planets to figure out where the gas giants actually are (or aren’t).

What mark does a giant planet leave?

To do this, the authors run a suite of N-body simulations in which a collection of planetary embryos are allowed to gravitationally interact and collide with each other. In addition, two giant planets are included in the simulations, which are meant to represent Jupiter and Saturn. A range of simulations are run in which the giants are given smaller and smaller masses. The purpose of this is to see whether there are any properties of the terrestrial planets that smoothly vary as the mass of the giants is changed. The final stage of terrestrial planet formation is quite stochastic. In other words, qualitatively similar but slightly different initial conditions can lead to very different results. Because of this, each set of simulations is run multiple times with a different random number seed.

Figure 1: Histogram showing remaining disk mass after running multiple realizations of each simulation. Each color corresponds to a different choice of masses for the giant planets. There is a clear trend in which massive giants remove the most material from the disk.

Most importantly, giant planets tend to remove planet building material from the disk. This happens because the strong gravitational influence of the giant places the smaller bodies onto highly eccentric orbits. This allows bodies to undergo close encounters with the giant, which can eject them into interstellar space. Extreme orbital eccentricities will cause a body to collide with the sun. The amount of remaining material (shown in Figure 1) anticorrelates with the mass of the giants. That is, the biggest giant planets remove the most material. This implies that one should expect to find smaller terrestrial planets alongside larger giants, simply because more of the planet building material gets ejected. 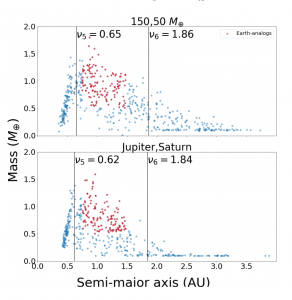 Figure 2: The mass and semi-major axis of all terrestrial planets produced from the set of simulations using a half-sized (top) and full-sized (bottom) Jupiter and Saturn. The red points indicate Earth analogs (0.75 < a < 1.5 and M > 0.5 Earth masses). The vertical lines indicate the locations of strong secular resonances with Jupiter (left) and Saturn (right). These resonances produce a slight gap in the radial distribution of terrestrial planets.

Additionally, the authors find that secular resonances with the giant planets can produce a ‘notch’ in the distribution of terrestrial worlds (shown in Figure 2). Under the gravitational influence of a third body, the orbit of an object about the sun will slowly precess. When the precession frequencies of two bodies match, in this case the Jupiter-like planet and terrestrial planets near 0.6 AU, the less massive body will undergo strong, sudden changes to its orbit. This results in a dearth of planets in the vicinity of the secular resonance. Using the location of this gap, one could potentially work backwards to figure out the mass and rough orbital characteristics of the giant planet in an exoplanetary system. 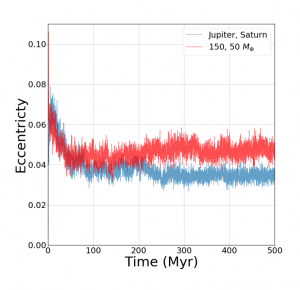 Figure 3: Evolution of the median eccentricity of all Earth analogues produced with a full-sized and half-sized Jupiter and Saturn. The eccentricity has implications for habitability, as large eccentricities drive stronger variations in climate, while moderate eccentricites are required to drive Milankovitch cycles.

Finally, the authors consider the effects that giant planets might have on the habitability of the inner terrestrial bodies. Most importantly, habitability depends on the distance between the planet and the star. Too distant and everything freezes; too hot and you will burn up. The orbital eccentricity also plays a role here. If the orbital eccentricity is too large, the planet will experience huge variations in temperature over the course of a year. However, a moderate eccentricity is actually required in order to drive Milankovitch cycles, which are thought to be a key ingredient for driving the evolution of life on Earth. Figure 3 shows the median eccentricity evolution of all Earth-like planets from the suite of simulations. More massive giant planets (shown in blue) tend to produce terrestrial worlds with lower eccentricities. This seems to imply that giant planets are beneficial for habitability.

To summarize, giant planet formation does appear to have a significant effect on the inner terrestrial worlds that form. Most importantly, the presence of a gas giant reduces the accretion efficiency by ejecting planet building material from the disk. This prevents terrestrial planets from growing as large, especially close to the orbit of the giant. Strong secular resonances with the giant can produce a gap in the radial distribution of terrestrial planets that would not otherwise be there. Finally, gas giants tend to reduce the orbital eccentricity of the terrestrial worlds that form, which helps stabilize the climate of these worlds. In the coming years, WFIRST will provide the first large scale census of wide orbit giant planets and will allow us to test whether the predictions made by these simulations are accurate.