Title: The hot Jupiter period-mass distribution as a signature of in situ formation

To fully understand how and where planets can form, astronomers must look to the extremes. One of the most exotic discoveries in exoplanet research has been of a class of planets known as hot Jupiters. These are gaseous worlds, hundreds of times the mass of the Earth, that orbit their host stars in mere days. Given the major role that Jupiter had in shaping the solar system, it is crucial to understand how gas giant planets form in a variety of environments.

How to build a Jupiter

The formation of a Jupiter-sized world is thought to be a two-step process. First, material in the protoplanetary disk conglomerates to form a solid core. If this core grows larger than about 10x the mass of the Earth, its gravitational pull becomes strong enough for the planet to accumulate a gaseous envelope. As this envelope grows, the gravitational pull gets stronger, allowing the planet to attain a huge mass fairly quickly. Eventually, the gaseous envelope becomes too hot for material to continue to condense and the growth is throttled.

For intermediate-sized worlds, radiation from the star can blast away the atmosphere if the planet is too close. This results in a dearth of close-in planets around 1/10 the mass of Jupiter. For larger worlds, however, this evaporation is ineffective. Even very highly irradiated Jupiter-sized planets only ever lose about 1% of their mass. There appears to be a very sharp cutoff,  below which hot Jupiters that are too small and close to their host stars simply don’t exist. The authors of today’s paper explain this cutoff with a wonderfully simple and succinct model and use it to argue that most hot Jupiters formed at their current location, rather than having been built further out and subsequently migrating inwards. 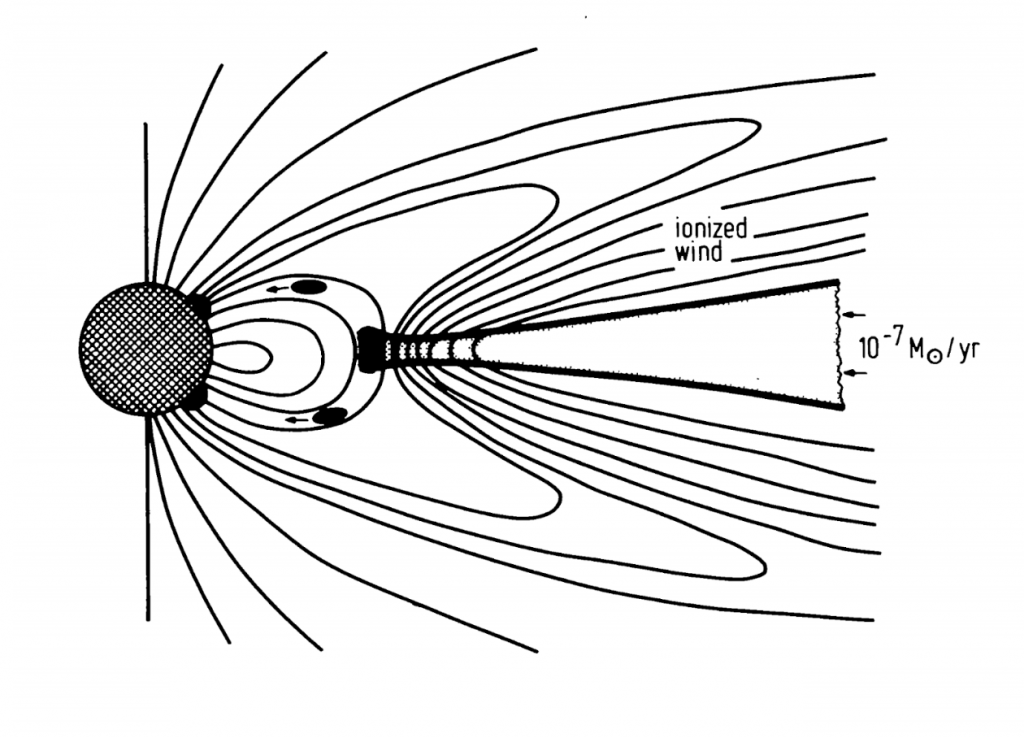 Figure 1: A diagram showing the structure of a star’s magnetic field (thin black lines) alongside a protoplanetary disk (thick black lines). Close to the star, the magnetic field is strong enough to disrupt the protoplanetary disk, preventing planet formation within a distance known as the ‘magnetic truncation radius’. (Figure 12 from Camenzind 1990)

It turns out that there is a limit on how close to a star planets can form. Young stars have strong magnetic fields that interact with the surrounding protoplanetary disk. As the disk loses angular momentum due to its inherent viscosity, material continually falls inward onto the star. Close to the star, the magnetic field can be strong enough to force material up out of the disk and along the field lines. The distance at which this occurs is known as the magnetic truncation radius (shown in Figure 1). Interior to the truncation radius, the protoplanetary disk becomes too disrupted for planet formation to occur. If the protoplanetary disk material is vigorously falling towards the star, the disk can work its way far inward before being torn apart by the magnetic forces.

An inner limit for gas accretion

Next, the authors use this battle between the disruptive magnetic field of the star and the inwardly streaming protoplanetary disk material to explain the observed lack of close-in, less massive hot Jupiters. They make the assumption that the final mass of a hot Jupiter is set by how quickly the protoplanetary disk material is streaming inwards, or accreting. Because this also implies that the magnetic truncation radius is smaller, one should expect larger hot Jupiters to lie slightly closer to the star. This is all, of course, assuming that these worlds formed in place, rather than being constructed further from the star and then migrating inwards. 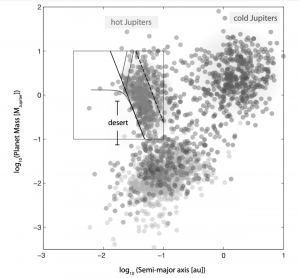 Figure 2: Orbital distance vs mass for all known exoplanets. Planets fall into three distinct groups: hot Jupiters (top left), cold Jupiters (top right) and sub-Jovian worlds (bottom center). For the hot Jupiter population, there is an absence of planets below and to the left of the solid black line, which the authors argue is set by the magnetic truncation radius. (Figure 1 from the paper)

Figure 2 shows the distribution of known exoplanets as a function of semi-major axis (distance from the host star) and mass. The hot Jupiters are the cluster of points towards the top left of the diagram. The straight black line shows the predicted cutoff due to the magnetic truncation radius. The vast majority of hot Jupiters lie above and to the right of this line. The authors argue that the sharp cutoff is evidence that worlds are being constructed in place right up to the magnetic truncation boundary. Had these bodies formed elsewhere in the disk and moved around, the distribution would not follow this cutoff so closely.

Above about 1 Jupiter mass, there are a handful of planets that do not seem to follow the cutoff denoted by the solid line. The authors explain this discrepancy as a result of tidal evolution. If a planet is massive enough and close enough to the star, its gravitational pull will distort the star slightly, similar to the way that the Moon invokes tides on the Earth. Strong tidal interactions between a star and a nearby planet can actually remove a significant amount of orbital energy. The result of this is that the planet’s orbit will shrink, possibly below the cutoff described in the previous paragraph. This should result in planets being found right up to the curved black line shown in Figure 2, below which there are indeed no observed hot Jupiters.

All of the features described in Figure 2 are consistent with the idea that the final mass and position of most hot Jupiters are set by the availability of planet-forming material at the inner edge of the disk. This is a strong indication the gaseous envelopes of these worlds, which make up most of their mass, were constructed at or near their present locations. With that being said, it is not clear where and how the cores formed which seeded the gas accretion.

Finally, it is worth noting that there exists a small but significant population of hot Jupiters which have highly eccentric orbits. These worlds most certainly formed further out and lost orbital angular momentum to a companion planet and do not fit into the framework described here. The fact that the majority of known hot Jupiters lie above the cutoff described by the model in this paper suggests that most hot Jupiters do not undergo orbital migration. This is an important clue on the path to understanding why many exoplanetary systems appear so vastly different than our own solar system.