Title: EvryFlare. I. Long-term Evryscope Monitoring of Flares from the Cool Stars across Half the Southern Sky


Status: [Open access on arXiv], Published in the Astrophysical Journal

For Sun-sized and smaller stars, energy is transported to the surface by roiling columns of convection. These convective bubbles twist up the magnetic fields at the surface and drive sudden, violent releases of energy through flares. Although flare events from the Sun are relatively inconsequential, stars smaller than the Sun have been observed to produce superflares strong enough to remove a planet’s protective ozone layer and kill all but the hardiest lifeforms.

Many potentially habitable planets are being discovered around low mass stars. To better understand the viability of these words for harboring life, it its crucial to understand how and where these flare and superflare events can happen. Flares happen very quickly. Catching them as they happen requires a large number of stars to be continuously monitored. This is exactly the goal of the Evryscope, the details of which are described in a previous Astrobite. So far, Evryscope has collected several years of simultaneous brightness measurements for over 15 million stars. This long observing baseline makes relatively rare superflare events easier to catch. The tradeoff with such a wide, ground-based view is that the less energetic, but more frequent flare events go undetected due to the reduced photometric precision.

The TESS telescope, which is currently monitoring brightness variations for some of these same stars from above the Earth’s atmosphere, makes up for this limitation nicely. Although TESS only observes a given target for ~28 days, these less energetic flares are much more frequent. By combining the multi-year data from Evryscope with the much shorter, but more precise observations from TESS, the authors of today’s paper attempt to get a handle on the frequency of a wide range of flare types from a large sample of stars. An example light curve, combining the Evryscope and TESS data, is shown in Figure 1. Even though the TESS observations only add a small chunk to the light curve, the fantastic sensitivity of TESS reveals a handful of low energy flares that are lost in the noise with Evryscope.

The authors combine ground and space-based measurements for 4,068 K and M stars which were observed by both telescopes. Using their custom-made Auto-EFLS flare detection pipeline, the authors marked 284 of these objects as flare stars, with 575 flare events detected in total. The most energetic flare detection, produced by a small M dwarf, temporarily increased the brightness of the star by a factor of nearly 100. This superflare event released hundreds of years worth of the Sun’s energy output in a tiny fraction of that time! 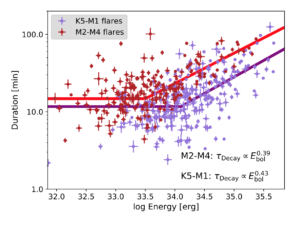 Figure 2: The duration of a flare as a function of total energy released. The sample is split into low mass M stars and the slightly larger K stars. The solid lines indicate a broken power law fit to each subsample.

With a sample of flare detections in hand, the authors then go on to constrain the physical process driving these events. Magnetic reconnection, which is caused by the sudden snapping of twisted-up magnetic fields on the surface of a star, should produce a very specific correlation between the duration and total energy released by a flare, is the most obvious candidate. To test the viability of this mechanism, the authors split the sample up by spectral type and fit a power law to the energy-duration distribution of each subsample. This is shown in Figure 2. A typical flare involves a quick rise in brightness followed by a slow exponential decay. Because most of the flare duration is made up of the decay phase, the brightness of a low energy flare can quickly fall below the detection threshold of the telescope. For this reason, the authors actually model the magnetic reconnection with a broken power law, with the break location corresponding to the lowest energy for which it is possible to see the flare. This break lies at lower energy for the less luminous M stars because it is easier to detect low energy events from these stars.

Most interestingly, the power law slope for both the M and K stars is larger than that predicted by magnetic reconnection models for Solar-type stars. Additionally, the slope is larger for the slightly more massive K stars compared to the M stars. This hints that there may be a mechanism beyond magnetic reconnection operating that is responsible for some of the energy output. Unfortunately, the scatter in the data is too large to definitively say whether these differences are statistically significant. 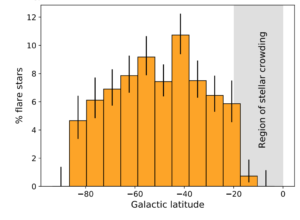 Figure 3: Fraction of flare stars as a function of galactic latitude. The shaded gray region indicates where crowding prevents flares from being reliably detected.

Flare Rates Throughout the Galaxy

Finally, the authors examine whether there is any correlation between the prominence of flare stars and their height above the disk of our galaxy. It is well-known that younger stars tend to lie closer to the midplane. In addition, astronomers think that a star’s rotation, which can drive flares, slows as the star ages. Following this logic, one would expect to find most flare stars near the midplane of the galaxy. To test this, all 4,068 stars were sorted by galactic height and then authors then counted what fraction of the stars exhibited flares at each height. This is shown in Figure 3. Near the midplane, there are so many stars that brightness measurements become difficult due to crowding, and so this region is ignored. Moving out from the midplane, there does appear to be a decrease in the fraction of flare stars. The authors warn, however, that this may be due to the M stars, which are responsible for most of the flares, becoming too faint to detect at larger distances.

This study demonstrates of the combined power of ground-based and space-based observatories. The high-precision observations from TESS reveal the frequent, low energy flare events, while the less precise but much longer Evryscope observations reveal the rare and powerful superflare events. The authors note that their most powerful superflare detection should be sufficient to completely remove the ozone layer from an Earth-like planet. This highlights the need for a better understanding of these superflare events as astronomers are finding more and more potentially habitable planets around these very active low mass stars.