Pulling on Pulsars: Searching for Black Holes in Globular Clusters with Pulsars 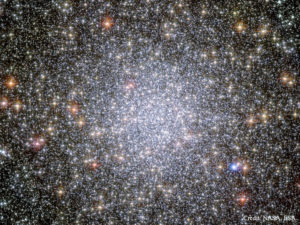 Globular clusters, dense groups of hundreds of thousands of stars bound together by their own gravity, are home to some of the most exotic objects in the universe. Among these are pulsars, highly magnetized neutron stars that beam radio emission out as they rotate. Some pulsars complete a full rotation in just a few milliseconds, and are aptly called millisecond pulsars. Globular clusters are also known to host black holes, some of the most elusive astronomical bodies known.

As discussed previously in this astrobite, millisecond pulsars are incredibly stable clocks, some with rotation rates, or periods, known to nanosecond precision (or better!). By timing these pulsars over a few years, we can measure not only how fast they are spinning, but also other astrophysical properties, such as how much they slow down as they lose rotational energy. With enough observations, and if the pulsar is in a binary system, we can directly measure the acceleration of a millisecond pulsar due to the gravitational potential of a globular cluster from timing. If there is an IMBH in the center of a globular cluster and a millisecond pulsar passes close by it, the acceleration of the millisecond pulsar will change due to their gravitational interaction.

To test their methods for searching for IMBHs, the authors simulate many different globular clusters with different size IMBHs, ranging from a hundred to ten thousand times the mass of the sun (as well as globular clusters without an IMBH). These simulations allow them to predict what the contribution to the jerk and jounce of a millisecond pulsar orbiting up to a parsec (3.3 light years) away from the center of the cluster will be. Most globular clusters are 20-100 parsecs (66-330 light years) in diameter, so this region represents less than one thousandth of the total volume of the cluster.

After simulating 47 Tuc eighty times, the results are…inconclusive (see Figure 2). The authors cannot say for sure that there is an IMBH in the center of 47 Tuc. What they can say is that if there is one, it must be less than 7000 solar masses. Anything heavier than that would have caused jerks to show up in their simulations. 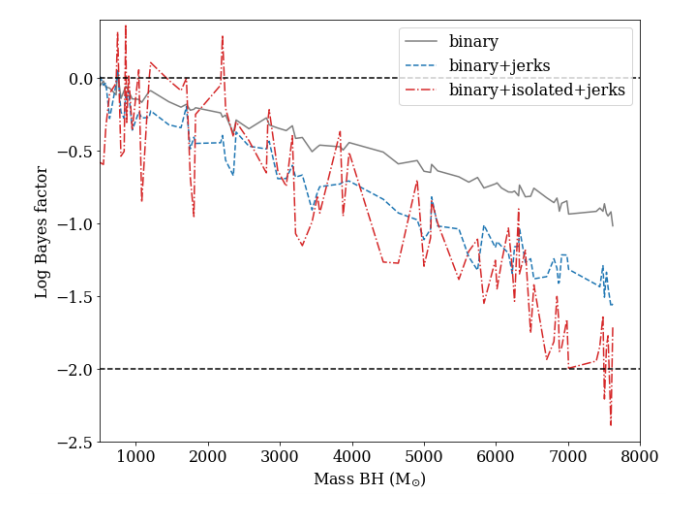 Even though the authors didn’t find an IMBH the methods they used are promising for future searches. The measurements of the millisecond pulsars acceleration, jerk, and jounce will get better, and the authors estimate that with 5 more years of data they will be able to detect IMBHs of masses down to 5000 solar masses. This is still pretty heavy, but using new radio telescopes like MeerKAT, they could get down to 1000 solar masses, which would be the most sensitive limit ever! The bottom line is, while we haven’t found an IMBH with millisecond pulsars yet, the future looks bright.

I'm a fourth year graduate student at West Virginia University studying various aspects of pulsars. I'm a member of the NANOGrav collaboration which uses pulsar timing arrays to detect gravitational waves. In particular I study how the interstellar medium affects the pulsar emission. Other than research I enjoy reading, hiking, and video games.