The Fault in Our (Unaligned) Stars

Title: Geometric Support for Dark Matter by an Unaligned Einstein Ring in Abell 3827

First Author’s Institution: Department of Astronomy and Astrophysics, The University of Chicago

Perhaps the greatest and most pressing problem in modern astrophysics is the problem of dark matter. Dark matter is a purported physical substance that emits no electromagnetic radiation and appears to interact only with ordinary matter and itself through gravity. The existence of dark matter is hypothesized in order to explain numerous key observations throughout the universe, most notably:

Unfortunately, despite more than a decade of searching, there has yet to be a definitive detection of particle-like dark matter by any of the numerous laboratory experiments done on Earth (e.g., the XENON1T experiment). It is then natural to wonder, could a solution to the problem of dark matter reside in a new understanding of gravity which avoids invoking a mysterious undetected material?

Alternative theories of gravity must satisfy observational tests already met by General Relativity, our current best understanding of gravity. One regime of such tests, as noted above, is in gravitational lensing by galaxy clusters. Without dark matter, all mass in the universe should be associated with visible sources (baryonic matter), and if dark matter did not exist, the mass of the baryonic matter should be sufficient to create the observed gravitational lenses we see throughout the universe. In today’s astrobite, we explore a work that uses a unique lensing system to put this possibility to the test.

The fundamental objective in this work is to determine whether a component of mass that is not associated with the visible matter in a galaxy cluster (a.k.a., dark matter) is needed to produce an observed configuration of gravitationally lensed images in a particular lens system. Light from all background sources is deflected and distorted by the presence of foreground objects (Figure 1). In the strong-gravitational lensing regime, these deflections produce multiple images magnified and altered in a manner entirely dependent on a) the distances between the observer, the source, and the lens, and b) the underlying foreground mass distribution. Since the quantities in (a) can be easily determined through a variety of methods, this means that the mass distribution of the foreground lensing system can be directly inferred from the positions and shapes of the lensed images! 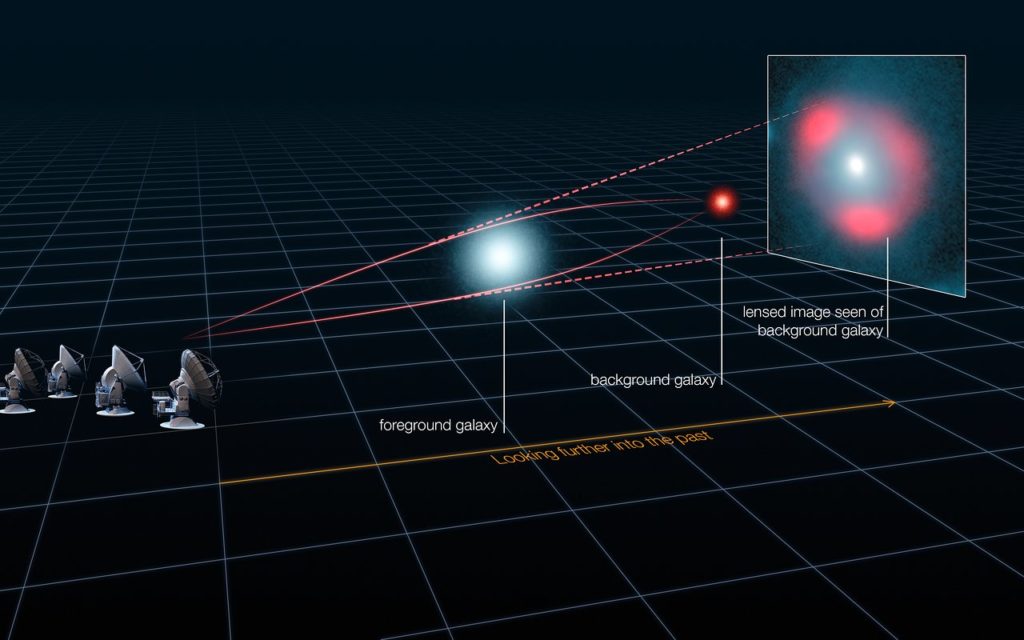 The galaxy cluster investigated in this work, Abell 3827, has been widely studied due to the unique multiple-image system created by chance alignment of a background galaxy and the foreground galaxy cluster mass distribution. This type of serendipitous arrangement, which results in a ring of lensed images (an “Einstein ring”; see Figures 1 and 2), is observed in many systems, though the unique feature of Abell 3827 is the level of detail revealed in the lensed galaxy. As we’ll see in the next sections, the detailed morphology of the lensed galaxy revealed in these magnified images is the key observable used to assess the necessity of dark matter in this lensing system. 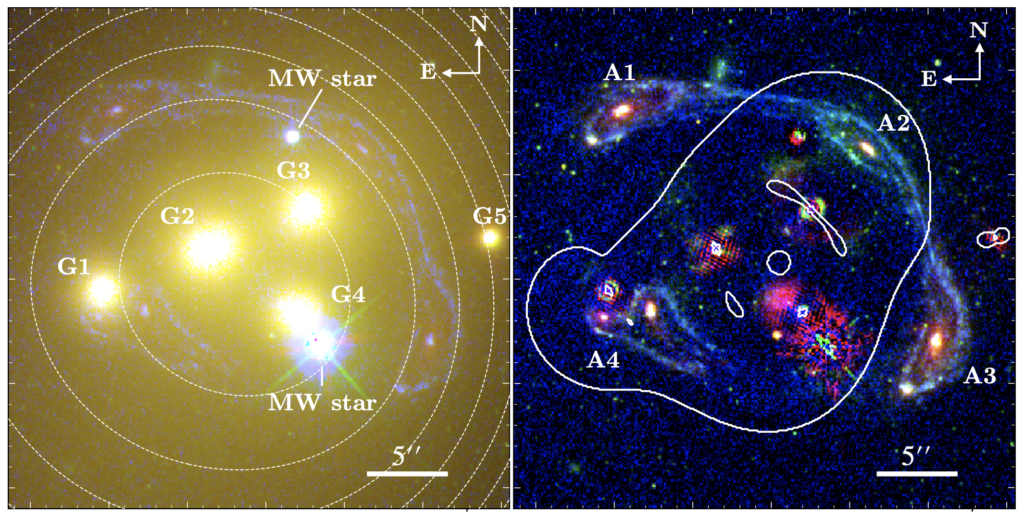 The authors of this work use the principle described above to create different types of lens models for the galaxy cluster Abell 3827, where each model describes the deflection of light rays due to the underlying mass distribution; this is called the “deflection field.” Half of the models allow for contribution to the total mass distribution only from the baryonic components (cluster galaxies, intracluster stars, and/or cluster gas), while the second half of the models also include an invisible component of mass assumed to be dark matter. All of the models rely on detailed structures in the lensed galaxy as constraints. For later reference, models 1, 3 and 6 include a dark matter component, while models 2, 4 and 5 do not.

All particular lensed features (like the yellow-red core in the background galaxy seen in Figure 2) that are split into multiple images, in reality, originated from the same location in the source plane. This means that a good model of the mass distribution will produce a deflection field that, when used to reproject these lensed images back to the source plane, predicts each lensed image to originate from the same location (test 1). Alternatively, it is possible to test the accuracy of a model by using a single lensed image, reprojecting it to the source plane, projecting it forward again to the image plane, and comparing these predicted multiple images to those that are observed (test 2). In this case, the lens model that best describes reality is the one that best reproduces the observed features of the gravitationally lensed galaxy across all the multiple images. An example of test 2 is shown in Figure 3 for the six lens models used in this work alongside the observed data.

Figure 3: Left: Images of the lensed galaxy comprising the Einstein ring in Abell 3827 with the light from stars and galaxies in the cluster removed. Right: Predicted image configurations by different lens models tested in this work. Models 1, 3, 6 include different representations of a smooth dark matter component, while models 2, 4, and 5 only include contributions from baryonic components parameterized in different ways. Each model achieves some level of agreement with the observed data, though models 1, 3 and 6 with dark matter achieve the greatest.

Is an Invisible Component of Mass Needed?

The requirement (or not) of an invisible component of matter to reproduce the lensed images in Abell 3827 would either favor theories of dark matter or alternative theories of gravity. If an invisible component of matter is not needed, a mass distribution associated with baryonic components of the cluster should be sufficient to both predict consistent locations in the source plane of multiple lensed images (test 1 above) and predict consistent morphologies and positions of multiple lensed images in the image plane (test 2 above). However, all models that include dark matter (models 1, 3, and 6) outperform those without dark matter in both tests. In fact, the dark matter models achieve an order of magnitude greater accuracy in predicting commensurate source locations of lensed images. Furthermore, as can be seen in Figure 3, these same models also predict lensed images in the plane of the sky far more similar to the observed data. Finally, the only component of baryonic matter that matches the alignment and orientation of the gravitational lensing mass is the one associated with intracluster stars. This can be understood if these stars were tidally stripped from galaxies due to the presence of a massive, cluster-scale halo of smooth dark matter which dominates the total mass of the system.

From the tests carried out in this work, the authors conclude that dark matter is indeed required to explain the lensing features in the cluster Abell 3827. Ultimately, mass distributions associated with only the baryonic components fail to produce reasonable predictions for the lensing system. Like the study here, further geometric tests of gravitational lensing will continue to provide new benchmarks for alternative theories of gravity. For the time being, it would seem that dark matter as a fundamental ingredient to the universe is here to stay.