One small ripple for spacetime, one giant leap for cosmology

Detectors dancing in the moonlight

The precision engineering required for gravitational wave astronomy is simply astounding: a giant system of mirrors and lasers spanning a distance of multiple kilometers, that are sensitive enough to detect a ripple in spacetime that is 10,000 times smaller than the size of a proton. If this doesn’t sound impressive enough to you, now imagine building it on the moon.

That’s exactly what the authors of today’s paper propose: a gravitational wave (GW) detector on the moon. Before discussing exactly why a lunar GW detector would be beneficial, let’s go over some of the basics of GW observation in general.

In order to detect gravitational waves, you need an interferometer, a system designed to allow different beams of light to travel distinct paths and then later be combined to create interference patterns. When something happens to change the distance that one of the beams travels (such as a passing gravitational wave), the interference pattern changes, and this can be recorded and analyzed. In general, the larger the interferometer, the lower the frequencies of GWs one can analyze.

For setups like the LIGO and Virgo detectors, the different arms of the interferometers span a few kilometers. This distance enables the detection of GWs in the 10 Hz – 10 kHz (10,000 Hz) range. For planned space-based missions like LISA, the arms will be spread by a few million km, and will be sensitive in the milli-Hertz regime. At even longer lengths, Pulsar Timing Arrays allow for the detection of nano-Hz GWs. Each of these frequencies opens up a new window onto the universe, as different astrophysical events emit GWs at these different frequencies.

One problem is that none of the proposed detectors are capable of detecting gravitational waves that are between about 1 deci-Hertz and 1 Hz, an area that is rich with potential astrophysical sources of gravitational waves. For ground based observatories, there is too much noise on Earth for these frequencies, and the required arm lengths are too small for space-based missions. 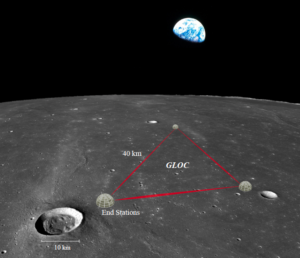 Figure 1: Proposed layout for the Gravitational-Wave Lunar Observatory for Cosmology (GLOC). The detector would consist of a triangular layout of stations, each separated by about 40 km. This triangular layout allows the detector to work as three complementary interferometers. Figure 1a from today’s paper.

That’s where the authors of today’s paper come in. They notice that by building a detector on the Moon, the amount of noise would be drastically decreased compared to the Earth, and one could construct a detector that is sensitive to this frequency range that, up until now, has been GW terra incognita. For the specific detector layout, the authors propose a triangular assortment of stations, separated by about 40 km, and they dub their hypothetical detector GLOC: the Gravitational-Wave Lunar Observatory for Cosmology. For an idea of what this would look like, see Figure 1.

Fly GLOC to the moon 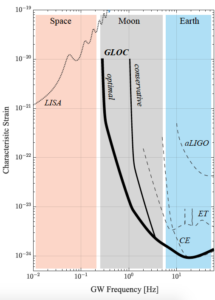 Figure 2: The predicted sensitivity of GLOC to gravitational waves as a function of frequency. A lower sensitivity means a greater ability to detect signals. The GLOC detector would open up a new range of frequencies, as space based missions (like LISA) are only sensitive to lower frequencies and ground based observatories (such as LIGO/Virgo) are sensitive at higher frequencies. Figure 1b from today’s paper.

So just how sensitive of a detector could GLOC be? To answer this question, the authors simulated the detector as well as potential signals from gravitational waves. They then compared how sensitive this detector layout is at different frequencies compared to other detectors, and noticed exactly what they set out to prove: that a lunar GW detector could enable GW astronomy at these difficult–to–detect frequencies. Figure 2 explores this comparison for a few different potential layouts of GLOC.

Next, the authors explored how well GLOC would be able to detect certain types of systems that emit GWs, such as mergers of two black holes or the mergers of neutron stars with black holes. As is the case with most of astronomy, the farther away an object is, the harder it is to detect, and so the authors explored how distant these various types of mergers could be such that GLOC would still be able to detect them. What is amazing is that this type of layout would be able to see over 70% of the observable universe when looking for certain types of mergers. This is beyond even the reach of any planned electromagnetic telescope! The distances for each different class of objects are displayed in Figure 3, which shows that, for example, GLOC would be sensitive to binary black hole mergers out to redshifts (a proxy for not only distance, but how far back in time one can see) greater than 100. 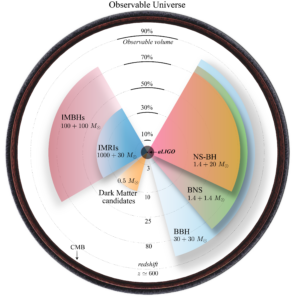 Figure 3: Cosmological reach of GLOC, where the concentric circles represent the ability to peer out to more distant corners (higher redshifts) corners of our observable universe. Each colored wedge represents how far a certain type of gravitational wave progenitor could be detected with GLOC, for binary black hole mergers (blue), binary neutron star mergers (green) and neutron star black hole mergers (orange). This is compared to the potential reach of aLIGO in black.

Having such an unprecedented view of the observable universe would allow not only for the detection of a myriad of mergers, but would also enable a measurement of the Hubble parameter out to extremely high-redshifts. This would allow for unparalleled precision tests of our current models of cosmology as and of General Relativity.

As an added bonus, GLOC would revolutionize our ability to localize GW progenitors. With current detectors, such as LIGO/Virgo, when a GW is detected, it is hard to pinpoint its exact location on the sky. Current reconstruction algorithms limit this localization to large banana-shaped swaths of the sky, spanning hundreds to thousands of square degrees (for an example, see the skymap here). However, systems such as binary black hole mergers emit lower frequency GWs for a much longer period of time than the frequencies which LIGO/Virgo can detect. This longer period of emission would grant GLOC more time to pinpoint the source of these waves, and first estimates show that GLOC would be able to localize certain mergers to regions on the sky that are less than one square degree.

Although there are no plans to construct a detector like GLOC as of now, this paper will definitely be sparking conversations for years to come. Regardless of the difficulties that might come with building a lunar gravitational wave observatory, recent successes of both gravitational wave astronomy as well as the exciting NASA Artemis program show us that what might sound impossible for lunar science might be attainable in the not-too-distant future.