A specular reflection, like the glint of the sun reflecting off the ocean at sunset, is generally a pretty good indicator of a smooth liquid surface like a calm lake. Although specular reflections observed for Saturn’s moon Titan were initially taken as evidence for seas of liquid hydrocarbons, the Cassini mission discovered that Titan’s lakes and seas were isolated mainly to the poles and absent from the low-latitudes that had reflected so brightly in Earth-based observations. So what other terrains could explain these observations?

First, let’s take a second to consider how these reflections work. Light interacting with a surface will be absorbed, transmitted, and/or reflected. A specular reflection occurs for a mirror-like surface where the beam reflects at an angle that is equal to the incoming angle, or incidence (see Figure 1). A sufficiently rough surface will scatter light diffusely, at a multitude of angles (isotropic at the theoretical extreme). Reality usually lies somewhere between these two endmembers.

Figure 1. Simplified representation of specular reflection (left) vs diffuse scattering (right). Incoming ray is green, with reflected rays in orange. In the specular case, most light is reflected at an angle equal to that of the incoming ray (i.e., i = r). In the diffuse case, light is scattered in many directions, usually owing to the roughness of the surface relative to the wavelength of light, with isotropic scattering in the idealized case.

Today’s authors reconsider radar observations of Titan that were previously made with the Arecibo Observatory (AO) and Green Bank Telescope (GBT). Measurements were mostly limited to Titan’s southern tropics (~7–27°S) due to the structure of the instrumentation and Titan’s orbital parameters. Each observation emits and receives the echo of a radio wave pulse (with wavelength of 12.6 cm) that is akin to scanning a slit across Titan’s diameter roughly 5150 km long and 14 km wide. This process results in a spectrum, such as the ones shown in Figure 2. The magnitude of the radar power is reported as the normalized radar cross section (NRCS), which is the ratio of the backscattered signal to that expected from perfect isotropic scatter. For this work, the authors focus on the maximum-NRCS, usually found as a peak at the center of the echo spectrum. This max-NRCS value is considered an anomalously specular radar reflection (ASRR) when the value is significantly higher than background noise, indicating a strong deviation from diffuse scattering.

Figure 2. Examples of echo spectra for the non-specular case (left) and highly-specular case (center). NRCS is typically maximum at the center of the spectrum (representing nadir) whereas it decreases for higher or lower frequencies (moving toward the edge of the disk and higher incidence angles). Green line represents the extent of Titan’s disk. Third plot is a histogram of max-NRCS values (right) for all observations (black) and for observations that have max-NRCS significantly above the noise (red). The authors consider max-NCRS >~1.5 to be ASRR. Adapted from Figure 1 of today’s paper.

These Earth-based telescope observations can be compared to measurements made by the Saturn-orbiting Cassini spacecraft to interpret the cause of ASRR in the absence of smooth lake surfaces. The locations of the strongest observed specular reflections lie within regions that are also bright in measurements by the Cassini radar altimeter. Previous hypotheses to explain these low-latitude specular reflections include smooth surfaces provided by transient liquids from methane rainfall and sand dune terrains. However, rain events appear to be relatively rare and no observed surface changes can be linked to the locations of the ASRR. Similarly, although sand dunes could be smooth at the 12.6-cm scale which the AO/GBT radar is sensitive to, telescope observations centered within known dune fields are not highly specular.

The authors note that ASRR commonly occur around two areas known as Hotei Regio and Tui Regio (see Figure 3). These two regions are distinct from the rest of Titan’s tropics and have been previously interpreted as either evidence of cryovolcanism or dry lakes (paleolakes). 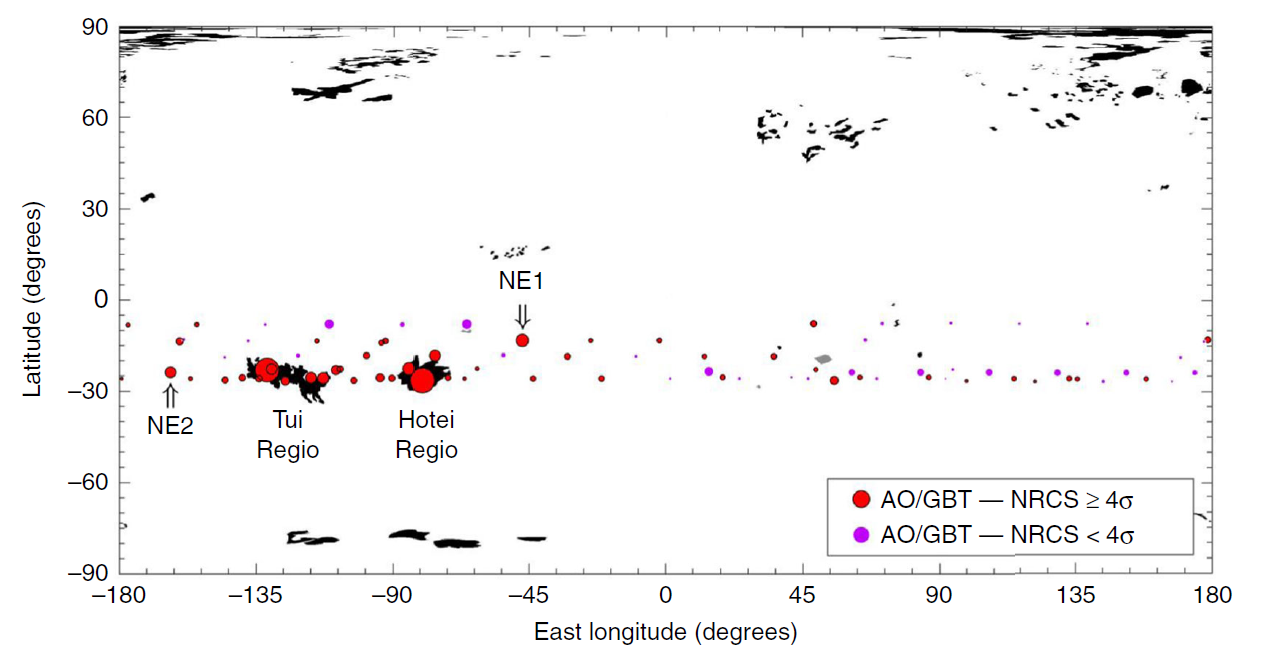 Figure 3. Map of AO/GBT observations on Titan where larger circles indicate greater max-NRCS and black splotches are possible paleolakes previously mapped by MacKenzie et al. Purple circles have high noise and red circles have max-NRCS significantly greater than the background noise. The two largest ASRR are found within Hotei Regio and Tui Regio, though two ASRR (NE1 & NE2) are found outside of either region. Adapted from Figure 4 in today’s paper.

The radar brightness, low topography, spectroscopy, and morphology found at the ASRR locations (see Figure 4) are all similar to likely paleolakes near the poles, leading the authors to favor the dry lake basin hypothesis. These basins are bright in Cassini radar images relative to their surroundings and spectroscopically consistent with a composition of evaporites formed in a lake setting. Two ASRR lying outside of Hotei and Tui are exceptions that may be similar but unfortunately cannot be imaged in high-resolution until a future spacecraft arrives.

Although the ASRR observations by AO/GBT can be considered specular under typical definitions, a more stringent definition of specular could be key for confidently identifying oceans on exoplanets. The authors propose that previous qualifications be considered quasi-specular, while the much stronger reflections possible from a liquid surface be considered specular on the basis of the signal’s coherence—that is, essentially how similar the reflected waves are. The unique composition and texture of the surface at Hotei Regio and Tui Regio create strong reflections at near-zero incidence, but should be separated from the intense specular reflection of liquids like that near Titan’s poles. Leveraging the lessons learned at Titan and increasingly advanced instrumentation, similar methods may one day enable the detection of liquids on even more distant and mysterious worlds.