As we grow older and learn more about ourselves, we sometimes think about changing our appearance: a new hairstyle, clothes, or maybe even a tattoo! Active galactic nuclei (AGN) are, in this respect, no different. Over the course of a galaxy’s lifetime it will accrete gas and dust that will make its way to the centre, where its supermassive black hole (SMBH) resides. As the SMBH feeds on this material, it will emit huge amounts of radiation and become an AGN. However, certain conditions can cause disruptions in the AGN’s gas supply. Whilst the cause of these disruptions is unclear, we can see the effects in the AGN’s changing spectrum. Either they ‘turn on’ as broad optical emission lines emerge or ‘turn off’ as those lines disappear. Today’s authors are interested in identifying what kind of galaxies host these ‘Changing-Look AGN’ (CL-AGN) to try and isolate the conditions that might trigger these changes.

Identifying CL-AGN involves a comparison between two sets of spectra of the same galaxy taken at two different times to find the changes in the broad emission lines. Different studies will approach this task in their own way but are ultimately following this principle. This is true for all identification techniques, but CL-AGN have only been identified as a phenomenon relatively recently so very few have been found. To produce today’s sample of 17 CL-AGN, the authors have had to combine detections from three different following this broad approach but with their own unique characteristics. So, what one study calls a CL-AGN might be slightly different from another. In addition, all but two of these detections are turn-on AGN. The authors argue that the lack of turn-off AGN is due to the relative abundance of quiescent galaxies in the nearby Universe. Within these galaxies, it is much easier to see the emergence of broad emission lines. As a result, their sample may not be particularly representative of the underlying CL-AGN population but the authors are very forthcoming about these issues and have shown care in constructing their sample.

Their comparison sample is made up of stellar masses, star formation rates and numerous other spectral properties for 500,000 local galaxies. Most of these quantities are measured across the whole galaxy and are also broken down into bulge and disk components. This data, mostly drawn from the SDSS, will allow today’s authors to place the CL-AGN within the wider galaxy population and isolate the conditions that trigger this change. 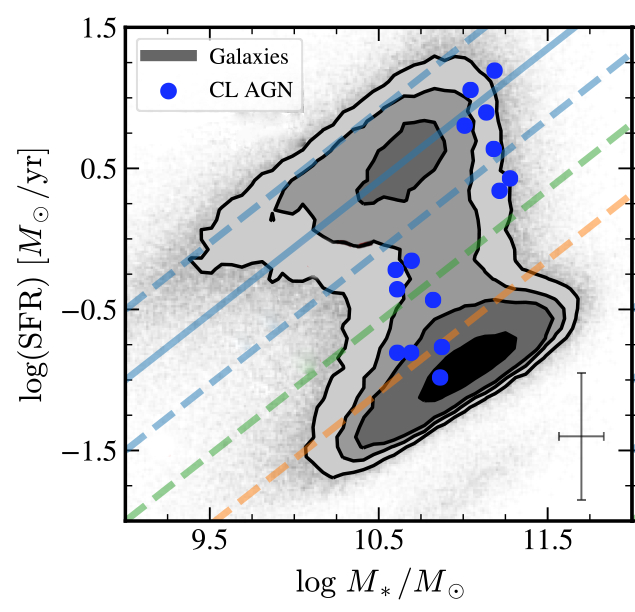 From their analysis, we can determine three key consistencies about the preferences of CL-AGN. Figure 1 shows that the CL-AGN are all consistent, within errors, of being hosted in green-valley galaxies. These are a rarer form of galaxy that lie in between the blue, actively star-forming galaxies and their red and dead counterparts. Green-valley galaxies are believed have recently undergone a burst of extreme star-formation, possibly implying the presence of large amount of cold gas at the centre which could fuel the, mostly turn-on, activity seen in this sample. 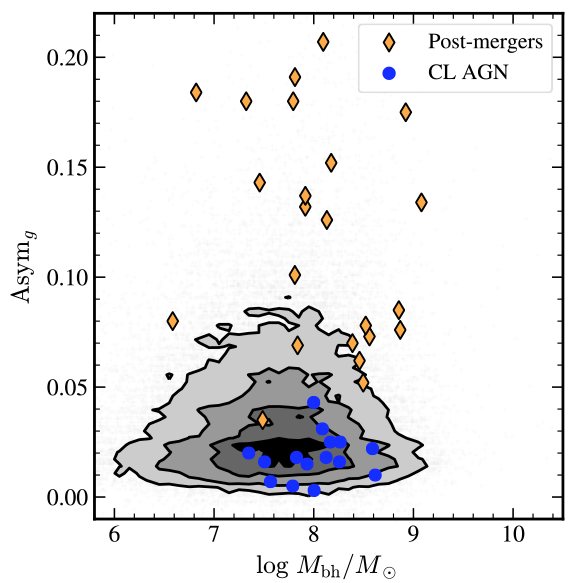 Gas is often thought to be driven into galaxies through mergers, however figure 2 shows us that CL-AGN are extremely centrally concentrated, especially when compared to the shapes of merging galaxies. In addition, we see that the CL-AGN asymmetry range is much tighter than the wider galaxy population. To explore this idea further, the authors then compare the galaxies’ Sersic Indices. This is a measure of the steepness of the galaxy light profile, with larger numbers indicating that stellar light is more centrally concentrated. Figure 3 shows us that the CL-AGN have much higher Sersic Indices than the galaxy population at large. Thus, the authors argue that CL-AGN preferentially reside in very symmetric and centrally concentrated galaxies. 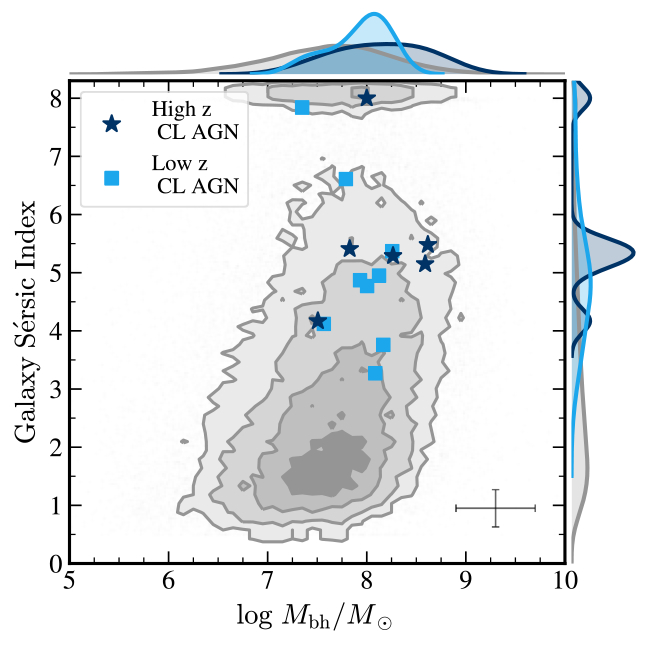 Figure 3: Sersic Index (indicating the concentration of galaxy light) against SMBH mass. Both the squares and stars show how CL-AGN are distributed compared to the underlying comparison galaxy distribution (grey contours).

CL-AGN are a relatively novel phenomenon, and working with a sample constructed from multiple papers may introduce some selection-based uncertainties. The authors admit that their sample may not be perfectly representative of the CL-AGN population but despite this they have found a fairly consistent set of properties. Their results imply that CL-AGN in the nearby Universe most likely turn on when there is an abundant supply of cold gas, and a high concentration of stellar mass in the central region of the host galaxy. Whilst the exact nature of the disruption is still a puzzle, these results will help focus future searches. With a better idea of where to look, strategies can be created that increase the sample of CL-AGNs and help better understand what causes these transitions to occur.