Catching gamma rays with a LHAASO

What are our galaxy’s most energetic and extreme particle accelerators? Could it be supernova remnants, the remains of the violent death of a massive star? Or might it be the nebulae that form around pulsars, rapidly rotating and highly magnetized neutron stars? Perhaps surprisingly, this is still an open question in high-energy astrophysics and the list of possible suspects is much larger than just those mentioned above.

However, we know that these particle accelerators exist. We know this because we are constantly being bombarded by high-energy cosmic rays – protons or heavier atomic nuclei that are traveling at nearly the speed of light. Now, over 100 years since Austrian physicist Victor Hess discovered cosmic rays by taking an electroscope on a hot air balloon flight, we still don’t know what astrophysical objects produce the highest energy cosmic rays. Some of these cosmic rays have an energy over 1 Petaelectronvolt (PeV =

electronvolts), comparable to that of a mosquito’s kinetic energy, but packed into a single proton.

The cosmic objects responsible for producing PeV cosmic rays are so called “PeVatrons,” and pinpointing these sources is no small feat. However, as these cosmic rays are so energetic, they are akin to a bull in a china shop, and they frequently collide with gas or material that surround the PeVatrons. These interactions produce gamma rays that carry about 10% of the energy of the initial cosmic ray. Thus, finding gamma rays with energy of about one tenth of a PeV (100 TeV) is a smoking gun for a PeVatron.

This is exactly what the authors of today’s paper set out to accomplish. The paper discusses using a detector that is still being constructed in Sichuan, China, the Large High Altitude Air Shower Observatory (LHAASO). LHAASO consists of many small detectors spread out over an area greater than a square kilometer. When a high-energy gamma ray from a PeVatron enters the atmosphere, it can collide with a particle in the atmosphere and create a very large shower of subatomic particles. The array of detectors on the ground can detect these particles and reconstruct the shower to infer properties about the initial gamma ray. A picture of part of LHAASO is shown in Figure 1. 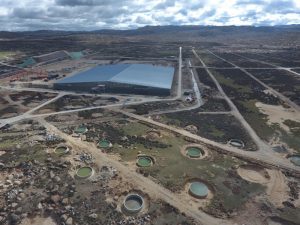 Although LHAASO is not even done with construction, its immense size already makes it an extremely efficient gamma-ray detector. To date, LHAASO has detected 12 sources of these ultra-high-energy (UHE) gamma rays, and has even detected the highest energy photon from an astrophysical source to date. While all of these sources provide a wealth of information on Galactic PeVatrons, one of the objects – LHAASO J2108+5157, the focus of today’s paper – is particularly interesting because of its mysterious origins.

Figure 2 shows the detection of this object at energies between 25 TeV and 100 TeV as well as for higher energies. The source is significantly detected in both of these energy ranges. However, what is strange is that while all of the other 12 sources have been detected by other telescopes in the “very-high-energy” band (around 1 TeV or so, which is high energy but still below the energy detection limit of LHAASO), this is the only object that does not have a counterpart at 1 TeV but is significantly detected at higher energies.

Figure 2. Significance map in the region around the newly detected source, LHAASO J2108+5157. The left shows gamma rays with energies between 25 TeV and 100 TeV and the right is gamma rays above 100 TeV. The cross denotes the best-fit location and the red circles show an approximate uncertainty on this location. The white circles show the average directional uncertainty for individual gamma-ray events. Figure 1 from today’s paper

The authors spend some time in the paper exploring what could be causing this UHE gamma-ray signal by looking for counterparts in other wavelengths, even if there aren’t counterparts detected in the 1 TeV gamma-ray band. While many of the other 12 sources were coincident with supernova remnants (SNRs) or pulsar wind nebulae (PWNe), there are none of these objects anywhere close to LHAASO J2108+5157.

However, the authors note that this object is spatially coincident with a molecular cloud. Distinguishing between the molecular cloud scenario and the SNR or PWN scenario is crucial, as molecular clouds could indicate that J2108+5157 is accelerating protons to these high energies. In the case of SNRs or PWNe, it is only believed that these objects might accelerate electrons (not protons) to high energies. The distinction between these two acceleration scenarios has dramatic implications for the spectra of cosmic rays. Figure 3 explores these two options by modeling what proton acceleration might predict versus electron acceleration. Although both models are consistent with the data, the authors believe the presence of a catalogued molecular cloud is promising for the proton scenario. Hopefully, future observations will be able to distinguish between these two cases. 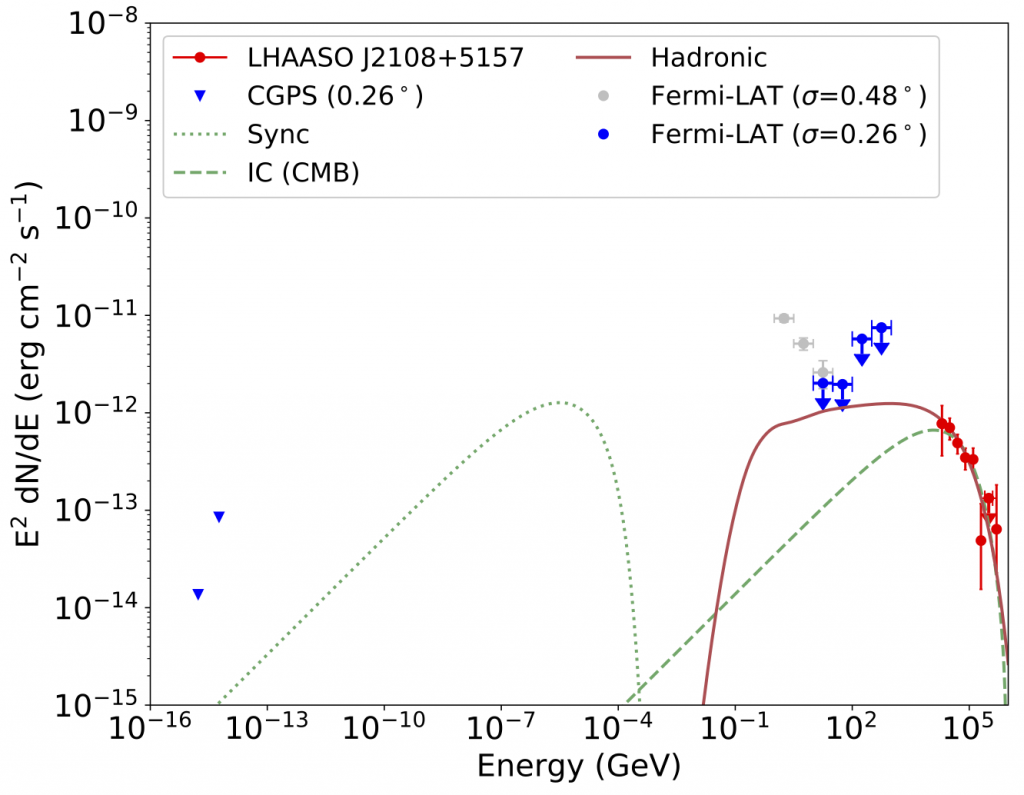 Figure 3. LHAASO data (red) compared to various models that would predict gamma-ray emission. The solid red line shows a model based on the acceleration of protons (hadronic) and the dashed green is based on photons scattering off of accelerated electrons (leptonic, labeled IC CMB in the plot). Although the data are consistent with both, distinguishing between these models is crucial for finding the sources of the highest energy cosmic rays. Figure 5 from today’s paper.

With the first dozen detected sources at these ultra-high energies, there is already a vast amount of insight that has been gained on the nature of PeVatrons. However, as LHAASO is still being constructed and will only improve and continue to take more data, the future of ultra-high energy gamma-ray astronomy will undoubtedly be bright.

A Black Hole at the Heart of the Archer

The birth of a new field