A Recipe for Growing Black Holes in Small Galaxies

The authors of today’s paper developed a theoretical model to predict the fraction of active massive black holes (103 M☉ < M < 107 M☉) that exist in dwarf galaxies, based on galaxy properties and observational constraints. In the model, the fraction of active black holes depends on the number density of the gas in the galaxy, and available angular momentum at its center. However, these two parameters are not necessarily available from observations, so the authors use proxies instead. The stellar mass (the mass of the galaxy that comes from stars) is used as a proxy for the number density of the gas. Instead of angular momentum, the authors use “rotational support”, a quantity determined from the rotational velocity and velocity dispersion of gas and stars. In the analysis, a black hole is considered active if it meets the criteria for efficient accretion.

Accreting black holes are multiwavelength objects by nature, so they have been detected in dwarf galaxies by different methods. However, some of the most extensive studies have been in the X-ray, due to accessibility to both wide surveys (covering lots of targets) and deep observations (seeing faint objects) in this wavelength range. The goal of the model is to describe the overall fraction of active massive black holes, but before that, the authors use the available X-ray measurements to place observational constraints on the model. These constraints are the X-ray emission of star formation in the galaxy and whether or not the AGN is “Compton-thick”, both of which affect the detectability of the AGN in observations by outshining or obscuring (respectively) the AGN X-ray emission. The authors adjust the model parameters until the calculated fraction of active massive black holes that would have detectable X-ray emission matches observations. The results are shown in Figure 1. 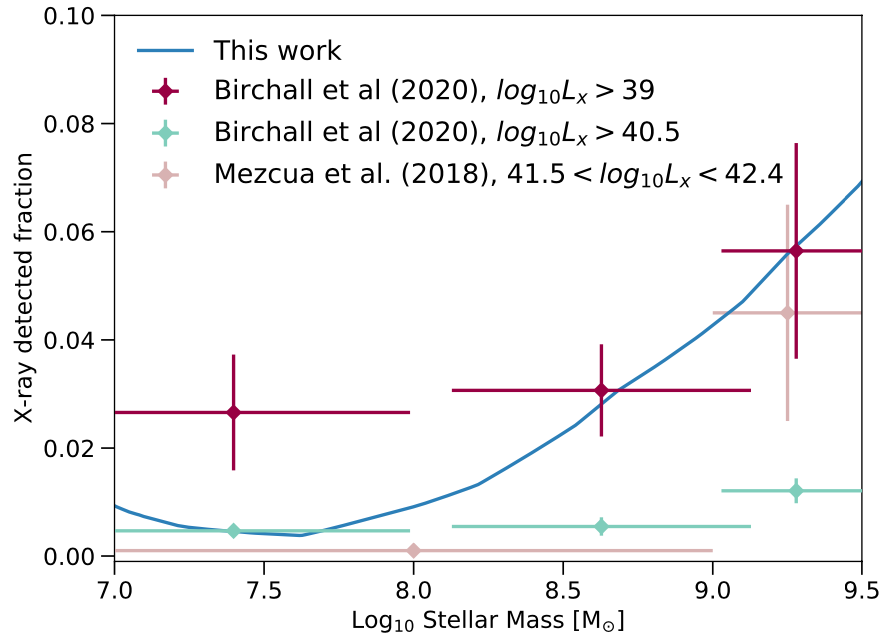 Figure 1. The y-axis shows the fraction of dwarf galaxies that have a massive black hole detected in the X-ray. The x-axis shows the mass of stars in the dwarf galaxy. The points with error bars show data from observations in previous works. The blue line shows the expected X-ray detected fraction as a function of stellar mass based on the model developed in this paper. (Figure 2 in the paper)

After calibrating their model to match observations in the X-ray, the authors remove the detectability constraints to calculate the fraction of active massive black holes at any wavelength. The results are shown in Figure 2, along with results from simulations and semi-analytical models (SAMS). The model presented in today’s paper predicts the active fraction of black holes in dwarfs, since that is more likely what is being measured by current observations, but these other simulations compute the total occupation fraction. 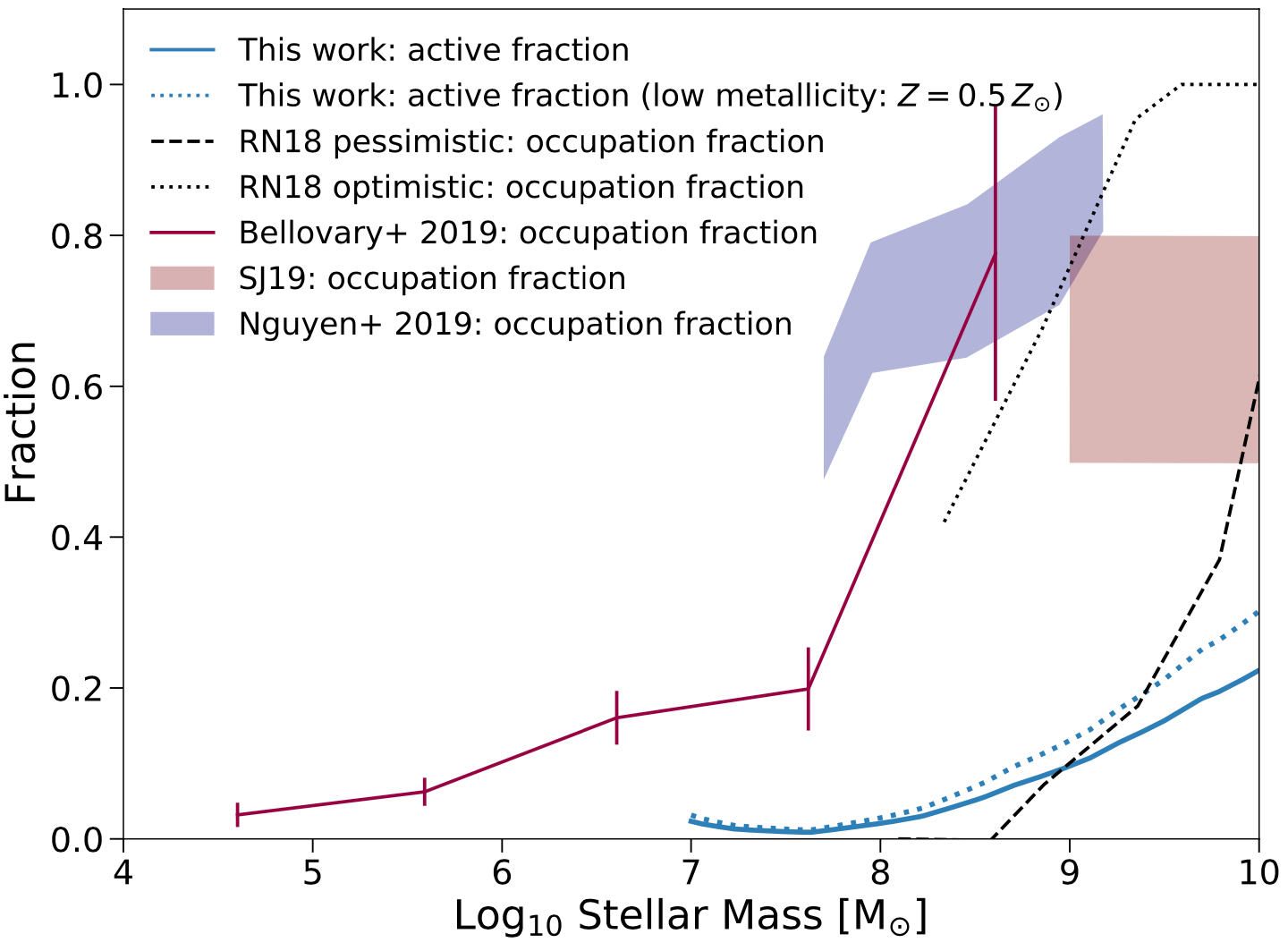 The authors explore the effects of the metallicity of the galaxy on the predicted active fraction. Metallicity just refers to the types of elements that are present in the gas. If you have mostly hydrogen and less “metals”, you have low metallicity. Lower metallicity gas leads to more active star formation, which produces a lot of X-rays, washing out the X-ray emission from the active massive black hole. Accounting for the effects of low metallicity, the calculated active fraction can be higher for this model (shown as the blue dashed line), up to 30% for the most massive dwarf galaxies.

Small, but Mighty! A galaxy robbed of its stars but contains a supermassive secret.