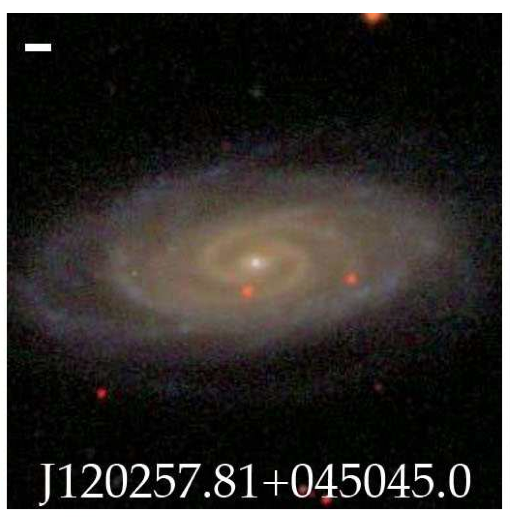 Figure 1: SDSS colour image of one of the bulgeless host galaxies in the Simmons et al (2013) sample (their Figure 2). The point source in the centre is the AGN.

One of the biggest questions in Galaxy Evolution circles currently is: “What drives black hole growth?” There are two theories currently: (i) major mergers between two galaxies cause black hole growth and consequently an active galactic nuclei (AGN) or (ii) secular evolution is feeding black holes (slow, non-violent processes internal to the galaxy, for example a bar in a galaxy which funnels material towards the black hole in the centre).

What we do know however, is that the shape of a galaxy is largely dependant on its past history of mergers; they can tear galaxies apart, cause tidal tails and strip them of their gas used to make stars.  Previous mergers in a galaxy’s evolutionary history therefore leave a signature on their current shape. In particular we know that massive disc galaxies which have been built through multiple mergers inevitably produce a central bulge (a big enough merger will form a massive elliptical galaxy, which is just one giant bulge). The reason we think major mergers are such a big player in black hole growth is because we see a  correlation between  black hole masses and the masses of these central bulges for most galaxies.

The cat amongst the pigeons came from the discovery of galaxies lacking in bulges but still containing an AGN (example in Figure 1), the first of which had relatively low black hole masses (as one would initially expect without a history of mergers). Previous studies found these bulgeless galaxies by selecting low mass black holes and then determining the shape; the authors of this paper however, select the bulgeless galaxies first (using user classifications from the Galaxy Zoo 2 project) and then determine whether they have an actively growing black hole. They constructed a sample of 13 bulgeless galaxies which are shown below in Figure 2. 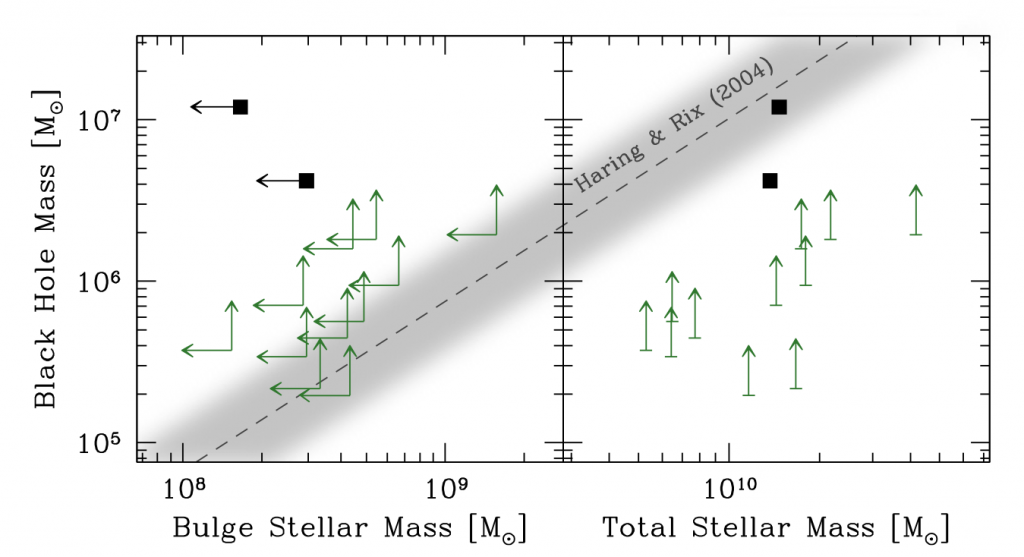 Figure 2: Black hole mass against the bulge mass (left) and total host galaxy stellar mass (right). The black points show two broad-line AGN for which the black hole masses could be calculated;  the green arrows represent the lower mass limits for the other 11 galaxies whose masses were calculated using IR observations from WISE (if the value could be improved, the only direction in which the points could move is in the direction of the arrow and we use the black points as a guide to how far that will be). Upper limits to the “bulge-mass” of these bulgeless galaxies was calculated assuming r-band pseudo-bulge fractions. The typical local relation between elliptical bulge/stellar mass and black hole mass is shown by the dotted line and the observed scatter by the shaded region. Figure 6 in Simmons et al (2013).

It is clear from the left panel of Figure 2 that these bulgeless host galaxies do not correlate their bulge properties with the mass of their black hole in the same way as typical galaxies do (shown by the shaded region).  It shows that the measured black hole masses allowed by the lower limits are above the traditional correlation with bulge stellar mass, i.e. the black holes are more massive than our current theories can explain. However, the right panel of Figure 2, taking the black points as a guide for where the lower limits will move to, suggests these bulgeless galaxies do show a clear correlation between their black hole masses and total stellar masses, similar to that for typical elliptical and bulge dominated disc galaxies (shown by the shaded region).

Both of these results are unexpected. We can’t explain firstly, why the black holes are more massive than we expect for their calculated bulge mass but secondly, why the black hole masses then correlate with the total stellar mass.  Why should galaxies which have formed in an isolated environment and grown their black holes through secular evolution, show the same correlation with total stellar mass as those which have grown their black holes through mergers? The authors hypothesise that the black hole mass may be more tightly tied to the overall gravitational potential of a galaxy and therefore its dark matter halo (which is traced by the total stellar mass) rather than to the dynamical bulge component, as previously thought. This then raises another question; how does a relatively tiny black hole “know” the huge mass of the galaxy it is in?

Despite all this, bulgeless galaxies hosting black holes are conclusive evidence that secular evolution must be a crucial part of the overall evolution of a galaxy population. Either (i) black hole growth is possible in the absence of bulge building mechanisms (such as mergers), or (ii) a method exists to keep galaxies bulgeless despite these mechanisms – we just haven’t figured it out yet…