The shapes of galaxies provide the biggest clues into the process which shaped  their formation but you cannot form a galaxy without forming some stars first. How, when and where stars form impacts greatly on the subsequent morphology of a galaxy and therefore the morphology we observe today. Such studies of the shapes of galaxies and the inference of past formation histories are abundant for local galaxies, however are scarce at high redshift, leaving us with an incomplete picture of galaxy formation.

What the authors attempt in this paper is to complete the first description of the full geometric shape of star forming galaxies over a large redshift range. They measure the projected axis ratios of galaxies (i.e. the shape the galaxy appears because of the line of sight angle we observe it at) in a mass range of

from a large sample compiled from the CANDELS, 3D-HST and SDSS surveys. The authors use a modelling technique to convert this projected axis ratio into a 3 parameters describing the three dimensional shape of the galaxy by modelling it as an ellipsoid (a 3D ellipse; with 3 axes lengths described by parameters A, B and C in order of decreasing length). These parameters then define the ellipticity, 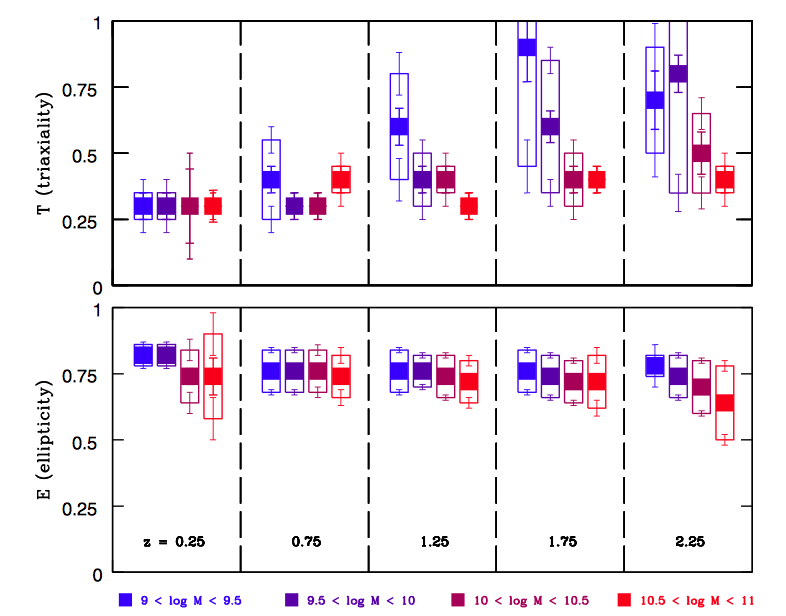 Figure 1: The ellipsoid modelled triaxiality and ellipticity of the sample of galaxies from van der Wel et al. (2014) in five redshift and four mass bins. The filled box shows the mean, the open box the standard deviation and the 1σ uncertainties on both the mean and standard deviation are shown by the error bars. A smaller value of T corresponds to a more disc dominated galaxy. A smaller value of E corresponds to a more spherical shaped galaxy (Figure 3 from van der Wel et al. 2014).

Figure 1 provides a visual summary of the conclusions of the work. Firstly, for local galaxies in the lowest redshift bin the low values of T and large values of E suggest most of the galaxies are very thin and oblate, i.e. disc-like in nature. We can see that this is also does not change significantly with increasing mass. Toward higher redshifts however, galaxies become less disc-like. This is especially apparent in the lower mass bins in Figure 1, which can be seen to increase the value of their T with increasing redshift. A population of spheroidal galaxies is therefore increasingly prominent amongst galaxies at z > 2. We can also see that the  ellipticity has little to no dependance on mass or redshift, which is viewed as an oddity by the authors – why should the ratio of short-to-long axis hardly evolve? The authors suggest further analysis is necessary to fully understand this.

The authors therefore conclude that star formation in the local universe currently takes place in the disc components of galaxies. However the authors suggest that due to the high value of T of low mass galaxies at z > 1 this implies the shape of a galaxy is not disc-like but elongated at early stages in it’s evolution. In other words, star forming disc galaxies in the present day universe don’t necessarily start out life as a disc. This suggests that the Milky Way may also have had such a morphological history, therefore using the previous estimates of the mass evolution of Milky Way-like galaxies as a function of redshift  and the above results, the authors estimate that the Milky Way gained a substantial stellar disc at

Mining for Fossils in our Universe