Copernicus and the made-up planets: simulating other earths

I have a habit, when asked what it is I do, of saying that I “crash galaxies into each other”. Most people take this in their stride, but just occasionally I find myself on the unenviable end of a look of sheer horror and moral outrage, at which point I have to add “…in simulations of course”.

Normally this puts everyone’s fears that I’m a megalomaniacal cosmic war-criminal to rest, but after a moment another cloud crosses their faces and they sheepishly ask: “How could you simulate that?”

And it’s a great question, how on earth can we coerce a computer into faithfully recreating something as complicated as a universe?

Luckily the universe turns out to be lovely and simple. You could write down most of the laws of physics going into these simulations on a napkin (or a particularly large margin). We let the whole thing shuffle forward in bitesize intervals of time, tracking the forces acting on each particle and paths they trace out. The early universe is basically just a big, almost uniform soup of hydrogen and helium. It gradually expands, cools, and individual stars and galaxies form out of collapsing clouds of gas. Whilst Big Pharma may be filling your heads with lies about fake-sounding made-up elements like Oxygen and Carbon, cosmologists usually only include and track the evolution of hydrogen, helium and “metals”.

Unluckily the universe turns out to be incredibly complicated. The sheer amount of stuff in it is mind-boggling. Do you know how many stars there are in a galaxy? You’re probably thinking of a large number, like 107, but there are way more than that! There are more stars in the galaxy than grains of sand in a small handful of sand. The combined weight of gasses swirling about the milky way is so much greater than that of a large dog as to make the comparison seem unhelpful and arbitrary. The universe is actually much larger than Canada. 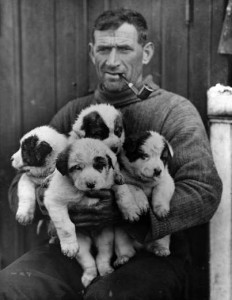 The galaxy is larger, from centre to outer arms, than four puppies laid head to tail. But that’s partly because if you try it they’ll keep wandering off.

But imagine if we could simulate an entire universe, not just down to the scale of galaxies, but right the way down to individual earth-like planets. The authors of this paper imagined that, then they stopped imagining it because they’d done it.

I’d be lying if I said they hadn’t cut a few corners to do so. Even in the biggest, flashiest, newest cosmological simulations they come nowhere close to this, what they call a “star particle” is actually around a million stars, bunched together and averaged out. Imagine if someone took you and a million of your friends, and did that. In space. It would be bad.

We just don’t have the computer power to resolve something as big as a cluster of galaxies and as small as individual stars at the same time. So have these guys just made up their planets? Well, yes essentially, but in a science way.

When the extreme scales of a simulation restrict us, we do the noble thing: we cheat (As much as using a mathematical model is cheating, though this would encompass most of science). In extreme regions like those around super-massive black holes we use relationships derived from more exacting small scale studies to feed in the relevant causes, like temperature and density of the surrounding gas, and get back out the knock-on effects, like the rate at which the black hole grows.

Or, in this case, for each of the millions of stars in each particle the authors have a nice, probabilistic algorithm that invents the stellar properties, scattered around some distribution that takes into account the age and environment of the particle. Then similarly, taking their cue from the wealth of new exoplanet data from the Kepler telescope, they start to pop terrestrial rocky planets into existence (we’d expect plenty of big ol’ gas giants too, but who even cares about a bunch of stupid Jupiters? They don’t!). 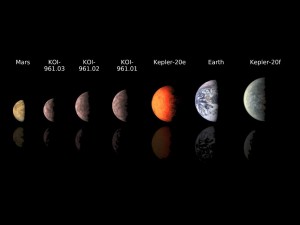 Some of the earth like planets that have so far been found (or at least proposed for Kepler Objects of Interests, KOIs). Since discovery astronomers have successfully found all the planet’s second halves too!

Now this may all sound pretty shaky. Normally making up data is frowned upon in science, so what’s different here? Well, whilst each individual planet is picked at random, looking at the properties of the huge number of planets formed we get back out a smooth distribution that fits well to our observations. It’s a result that works as well on the scale of particles as planets and galaxies, as long as you look at a large enough sample of random unpredictable events they’ll average out into a beautifully clear set of general trends. Computer power hasn’t quite got there yet, but it won’t be long until we can make broad brush predictions about the chemicals and atmospheres on these planets, probing further how much of a morbid fascination our universe has with spitting out life.

Well firstly, a bit of perspective. Putting aside our vanity we can see it’s a certainty that plenty of other planets like earth exist out there, with as much (or maybe even more) capacity to nurture life. But whilst we may not be special, we also may not be usual (which is probably the opposite of what your mum told you when you were young). Most rocky planets are about as old as earth, but far more of them are orbiting the smaller, more common cousin of our sun, a red dwarf. And they’re not in galaxies like ours either, they’re more likely to be found in much larger, less structured elliptical galaxies (compared to our flat, leggy, spinning top of a Milky Way).

Left: Number of rocky planets simulated per stellar mass for galaxies of different masses. M stars (black line), or red dwarves, dominate the count. More massive F, G and K stars (blue line), like our sun, may look like they come in a close second, but their numbers have been multiplied by 40 in this plot. Why? Just because. The Milky Way, with a stellar mass slightly below 10^11 is shown in yellow. Right: Fraction of all rocky planets expected in galaxies of different masses. Regardless of what type of star they’re orbiting rocky planets are more common in galaxies many times more massive than ours, which are much more likely to be giant ellipticals than Milky Way-like spirals.

Interestingly, the Copernican principle, or it’s wonderfully named sister, the mediocrity principle, are slightly at odds with this result. Extending the chain of reasoning that got us to a heliocentric solar system suggests that our planet is not unique, but going further still probabilistically we should find ourselves on the most mundane, average and commonly boring rocky planet there is. Whilst plenty of teenagers will argue strongly for this, it doesn’t seem to be true according to this study. Instead we find ourselves orbiting an unusual type of star in an uncommon kind of galaxy. Our planet is not unique, but nor is it typical. 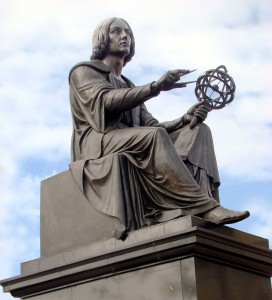 Nicolaus Copernicus, celebrated here for his ability to propose a heliocentric universe whilst using chopsticks and gazing into the middle distance.

We, as biased and vain observers, find it easy to make ourselves the center of our own narrative, both figuratively and geographically. We’ve extended the Copernican revolution to it’s logical conclusion, where our planet, our sun, our galaxy, possibly even our universe, are not unique or special. Now we need a new revolution, and cast aside any notion that we are typical, that our view of the universe is exemplary and that our situation should be representative of anyone else’s.

We are one data point, individually random and unpredictable, and it won’t be until we’re able to census other life in our own and alien galaxies that we’ll be able to build up an overlaying trend. Until then our conclusions are no more reliable than made-up planets in a fake universe. 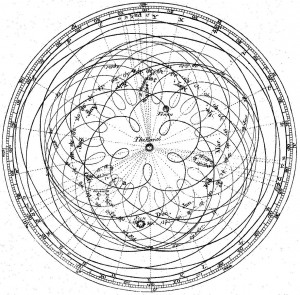 The movement of the planets in a geocentric universe. Completely consistent laws of physics governing their motions can be formulated even from this viewpoint. However they’re all epicycles and chaotic motion, much more complex than nice Keplerian ellipses, and physicist’s are a big fan of Occam’s razor.