Status: Accepted to The Astrophysical Journal, open access on arXiv

Sometimes these conversions are relatively straightforward—for instance, the ultraviolet flux of a galaxy can be plugged into commonly-used formulas to find the star formation rate of a galaxy (the mass of stars that a galaxy forms per year). Sometimes these conversions are more complicated—one way to measure the stellar mass of a galaxy (the mass of stars in a galaxy) is to compare the galaxy’s spectral energy distribution to a library of simulated models and to find the closest match.

The age of a galaxy’s stars can complicate these relationships; a galaxy with young stars and a galaxy with old stars can look very different even if the rest of their physical properties are similar. To get around this, the authors first sort each galaxy by the observable spectral index Dn(4000), which is a measure of stellar population age.

Time for the real data

1) How do galaxies transition from the star-forming blue sequence to the passive red sequence?

Blue star-forming galaxies eventually stop forming stars, becoming “red and dead” in a process called quenching (see this Astrobite and this Astrobite for more on quenching). But this isn’t a monotonic process—even quenching or quenched galaxies can have temporary bursts of star formation if they suddenly get an inflow of gas that can be used to make stars. 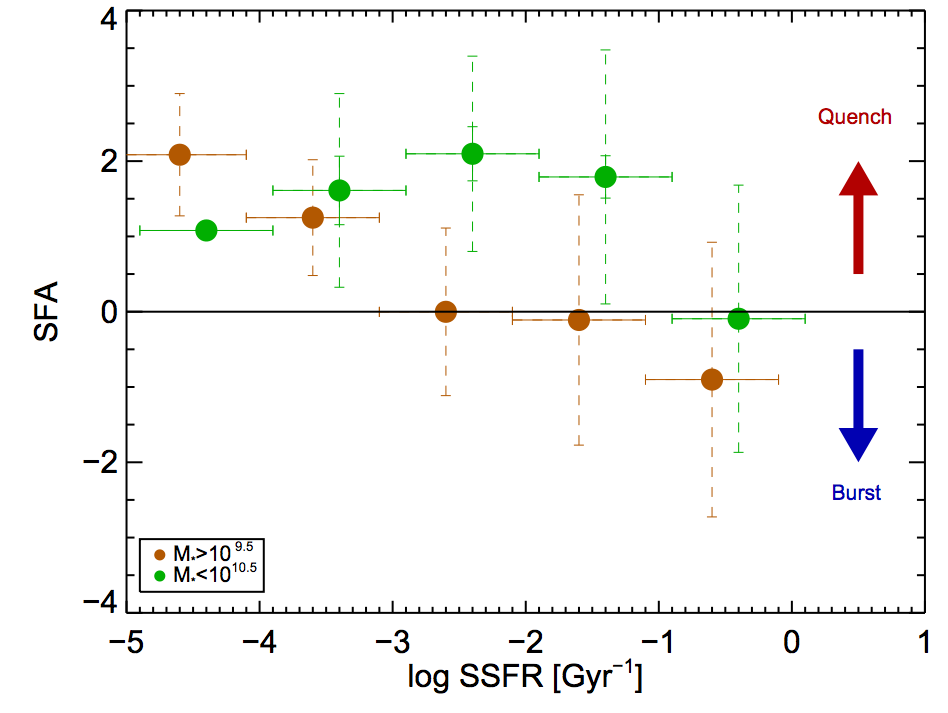 The supermassive black holes in the center of many galaxies can actively accrete gas, often producing energetic outflows as a result. So far, it hasn’t been clear whether or not these active galactic nuclei (AGNs) quench or trigger star formation. As shown in Figure 2, the authors find that AGNs may accelerate quenching—but this is a tentative result, one that needs to be tested in further detail with a larger sample. 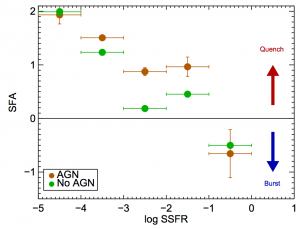 Figure 2. Same as Figure 1, but this time green points denote binned averages for non-AGNs, while orange denote AGNs. At low and high SSFR, there’s not a significant difference between AGNs and non-AGNs–but at intermediate SSFR, AGNs tend to quench more than non-AGNs.

Today’s paper isn’t the first to propose using simple formulas to find galaxy properties from observables. But it’s the first to propose using star formation acceleration as a measurable physical property, and the preliminary results in this article are promising. Maybe star formation acceleration could be a key to improve our understanding of how galaxies change over time.

It Isn’t Gatorade Quenching This Galaxy