How is it possible for planets to exist? Even though we know planets must have formed from planetesimals that are tens of kilometers in size, the most basic models of protoplanetary disks have trouble forming planetesimals from the micron to centimeter-sized dust that populates these disks. For dust particles to grow into planetesimals, they need to be able to clump together enough to reach roughly the same level of concentration as the gas in the disk – which can be difficult since there is 100 times more gas than dust.

Fortunately, beyond the snow line at about 2 AU, the disk will get cold enough for water vapor to condense into solid ice. It is already widely accepted that this extra ice will enhance the concentration of solids enough to form planetesimals and in turn, planets in the outer disk. Yet, the most detailed models of this scenario leave out enough relevant effects that we cannot reliably determine the impact of this extra ice.

Djoeke Schoonenberg and Chris Ormel, the authors of today’s paper, set out to improve our understanding of whether the snow line can trigger the formation of planetesimals by creating a more rigorous model that better captures the dynamic structure of the disk and of the dust grains themselves.

Model Upgrades with a Side of Fruit

My favorite part of their model is that they factor in the structure of individual “icy dust” grains. Many studies of protoplanetary disks often leave out what the mass in the disk is made of – instead, only tracking a distribution of density across the disk or nondescript particles. However, not only do Schoonenberg and Ormel describe each icy dust grain as 50% silicates (the typical composition of a regular dust grain) and 50% ice; but they also establish how the silicate “seeds” in each grain are divided up. As shown in Figure 1, a dust grain can either have a single silicate core like an avocado (their “single-seed” model), or it can have many smaller seeds evenly distributed through the grain like a watermelon (their “many-seeds” model).

The authors run separate models for each type of dust grain. They then solve for the enhancement of ice and the solid-to-gas ratio to see if these values reach a high enough concentration to form planetesimals.

Figure 1. Structures of icy dust grains. In the avocado model, each grain has a single silicate core surrounded by a shell of ice. In the watermelon model, each grain has a bunch of smaller silicate seeds evenly distributed through the ice. When an avocado dust grain evaporates, it slowly loses only its ice before leaving its core behind. When a watermelon dust grain evaporates, it slowly loses both its ice and its silicate seeds together as it drifts inward. Adapted from Figure 1.

Forming Planetesimals Early and with Watermelon

In the single-seed “avocado” model with the optimal higher viscosities, Schoonenberg and Ormel find that the concentration of ice can be enhanced by a factor of 3 to 5 just beyond the snow line (see Figure 2). Interestingly with the many-seeds “watermelon dust” model, they find that this enhancement can double! This occurs because in the single-seed model, only the extra ice from inside the snow line contributes to the enhancement. However, in the watermelon model, the small size of the watermelon seeds plays a key role. Since the seeds are so small, they get carried by the gas that makes up most of the disk. When some of the gas from inside the snow line moves outward, some of the watermelon seeds follow it outward. As a result, many of these watermelon seeds end up captured in icy dust grains and also contribute to the extra ice, which doubles the enhancement.

Ultimately, the authors expect the ice enhancement in an actual disk to be in-between the results from the avocado and watermelon models due to the fact that both structures of dust grains are plausible, and also because other dust grains may be a “hybrid” of both fruits and have a large silicate core as well as additional smaller silicate seeds in the outer icy shell. 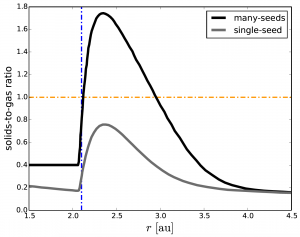 The ice enhancement of about ~7 that the authors find is ten times lower than the enhancement of 75 found with a simpler model, emphasizing the importance of considering the more intricate details of the problem! Thankfully, this enhancement is still high enough for the concentration of large dust grains to reach the concentration of gas and produce planetesimals (see Figure 2). More importantly, the authors find that the best conditions for forming planetesimals happen soon after a star and its disk are born, supporting observational evidence that giant planets in the outer disk can form quickly.

Lastly, Schoonenberg and Ormel expect the cm-sized ice pile-up near the snow line to be detectable by radio (cm-wavelength) telescopes. Seeing this feature in a real disk would be the best test for finding out how well we understand planetesimal formation near the snow line.