Title: H− Opacity and Water Dissociation in the Dayside Atmosphere of the Very Hot Gas Giant WASP-18 b

Disclaimer: I work in the same department as the lead author, but have not had any scientific involvement in this project.

Hot Jupiters are the one family of exoplanets that has continued to challenge our understanding of planetary systems, ever since they became one of the first types of exoplanets to be detected. Their relative size, mass, and proximity to the host star make them the easiest exoplanets for detection and atmospheric characterization, especially from ground-based instruments. No wonder that recent wide-angle surveys from the ground (WASP, KELT and MASCARA to name a few) have been quite successful in finding these gas giants, some of which are orbiting early type bright stars. Atmospheres of hot Jupiters around such bright stars are blasted with a significantly high amount of radiation on their day side. Observations using the technique of transmission spectroscopy have revealed some surprising features of the vertical structure and chemical composition of these atmospheres. Today’s paper focuses on the atmospheric properties of one such gas giant — WASP-18b — which is in a tight, 0.94-day orbit around its host star and which has a scorching equilibrium temperature of 2700 K.

Recent studies of some of the very-hot Jupiters suggest the presence of thermal inversion in their atmospheres. This is akin to what happens in the earth’s stratosphere due to the presence of ozone. In the case of hot Jupiters energy from stellar irradiation is absorbed by the presence of gas phase TiO and VO. While thermal inversion is not totally unexpected in these atmospheres, the anomalously high values of metallicity and C/O ratio (frequently used indicators of chemistry and abundances in exoplanet atmospheres) that are constrained by the models that best explain these observations suggest that there is more to this than meets the eye. Today’s paper tries to resolve this issue by taking a cue from the conditions in stellar photospheres which are at effective temperatures similar to those of very-hot gas giant exoplanets.

Who’s drinking all the water?
Water is one of the most prominent sources of opacity that is taken into account by the theoretical models used to explain the emission spectrum of hot Jupiters in the wavelength range probed by today’s paper (see Figure 1). Despite the low resolution in Spitzer/IRAC bands, there is a good indication of the presence of some spectral features around 4.5 μm. An emission feature in a band where the atmosphere is optically thick (due to the presence of opacity sources absorbing relatively more in that band, one of them being water in this case) can typically be explained by the presence of a thermal inversion. The absence of corresponding water features expected around 1.4 μm doesn’t quite fit this picture though. A high C/O ratio could be invoked in this case as that would drive the chemistry of the atmosphere to deplete water and its features, while still allowing an inverted atmospheric profile. However, the authors suggest that water at the high temperature and low-pressure conditions of very-hot hot Jupiters should instead undergo thermal dissociation. For comparison, stellar photospheres with similar effective temperatures have higher pressures (due to higher surface gravities) that prevents water from thermal dissociation and makes it show up in their emission spectrum.

Another key factor used by the authors to explain the absence of water features is the presence of H− ions whose opacities become important in the temperature range of 2500-8000 K. The effect of H− opacities has been included in atmospheric models for brown dwarfs and hot Jupiters in past, but has not been considered for retrieving the properties of very-hot gas giants. Generation of H− ions in the dayside atmospheres of very-hot hot Jupiters can occur due to thermal dissociation of molecular hydrogen and the presence of ample free electrons from metal ionization at high temperatures. 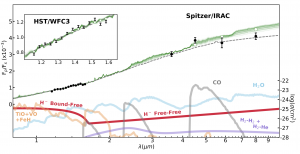 Figure 1: The emission spectrum of WASP-18b (shown by the black points) is obtained by observing the secondary eclipses (before and after the planet is going behind the star in the line of sight) which allow us to measure the flux emitted by the day side of the planet(on Y axis). The excess in flux around 4.5 μm indicates the presence of emission features. However, the spectrum is featureless in the band probed by HST/WFC3 instrument, which is explained as the combined effect of H− opacity and water depletion due to thermal dissociation. This can be seen from the opacity cross sections of H− and water (shown by red and blue curves, values on right hand Y axis) around the HST/WFC3 bandpass. Figure 1 in paper.

Inversion could indeed be a trend

On inclusion of both thermal dissociation of water and H− opacity contribution in the theoretical models, the retrieved values for metallicity and C/O ratio for the atmosphere of the WASP-18b drop to solar values. The best fit temperature structure, in this case, is also inverted due to the presence of high altitude absorbers like TiO and VO. However, their features in the emission spectrum are damped by competing absorption due to H− ions (see Figure 1). This is in contrast to the earlier retrieved results for WASP-18b that suggested super-solar values for its metallicity and C/O ratio, but is more plausible given the expected formation history for planets in this mass range (see Figure 2). 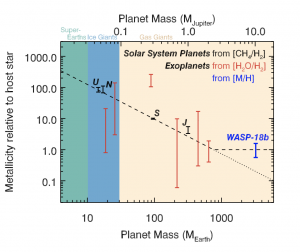 Figure 2. This shows a comparison of metallicities of planets with respect to their host stars. Massive gas giants like WASP-18b are not expected to follow the same trend as that for less massive planets, and should instead closely resemble their host stars in terms of their metallicity. This is reconfirmed from the observations in this paper. Figure 3 in the paper.

This emphasizes the importance of considering H− opacities and depletion of atmospheric species due to thermal dissociation when looking at the atmospheres of exoplanets with high equilibrium dayside temperatures. This also strengthens the trend of thermal inversion which has been observed for most very-hot gas giants. It would be interesting to see how this plays out in future in the context of other very-hot gas giants.