The Curious Case of the Mysterious Over-Luminous Brown Dwarf

Our story begins on a bright and not-so stormy brown dwarf. Now brown dwarfs are themselves mysterious objects, but CWW 89Ab is especially odd. But let’s start at the beginning; why are brown dwarfs mysterious? It is theorized that brown dwarfs form similarly to main-sequence stars; a gas cloud collapses, heats up, and eventually ignites. However, brown dwarfs do not have a high enough mass to start fusing hydrogen like a star and instead are left fusing deuterium. Over time, these objects cool off and start to dim and fade away.

What makes these objects such a mystery is that we have very little understanding of how they evolve over time. Astronomers use brown dwarf models informed by their observations to map the formation and evolution of these objects. However, these models require independently determined masses, radii, luminosities, and ages for brown dwarfs. If one of these parameters is missing or is determined using other models and not observations, large uncertainties may occur. And up to this point, no brown dwarf discovered to date had independent measurements of all 4 required parameters.

Then our protagonist, CWW 89Ab came along. It is a brown dwarf that was initially discovered by the K2 mission and orbits a sun-like main sequence star in the Ruprecht-147 cluster. Using transits and radial velocities, Nowak et al. 2017 were able to determine its radius of 0.94 Jupiter radii and mass of 37 times that of Jupiter. Because this system also falls in an open-cluster, the authors determine an extremely precise age for the brown dwarf by looking at the Main-Sequence Turnoff for the cluster (this website includes a nice explanation and animation on how this works). The only thing left was to determine CWW 89Ab’s luminosity.

The authors of today’s paper used Spitzer to observe CWW 89Ab passing behind its star, which is known as the secondary eclipse. The depth of the eclipse represents how much light from the brown dwarf is blocked, allowing the authors to determine its luminosity at 3.6 and 4.5 micron wavelengths. From these observations, the authors discovered that this brown dwarf is 16x brighter than predicted by evolutionary models! In other words, from the secondary eclipse depths, the authors found that the brown dwarf must have a brightness temperature of 1700K. However, brown dwarf evolution models suggest that this object should instead have an interior temperature of 850K. Figure 1 highlights just how extreme this luminosity difference is. 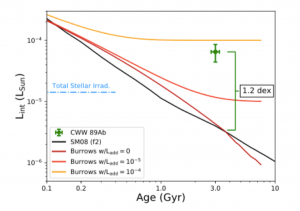 Figure 1: The luminosity of CWW 89Ab (green point) plotted against different brown dwarf evolution models. The different Burrows models explore varying luminosities assuming the brown dwarf is receiving large amounts of flux from the host star. The Total Stellar Irradiance is plotted with a blue dashed line, which is the total luminosity the brown dwarf receives from its star. (Figure 9 in today’s paper)

The Game is Afoot!

The authors, like any good detectives (or scientists), explored multiple possibilities for the cause of this over-luminosity (or temperature difference). One possibility is that the nearby main-sequence star is heating the brown dwarf, making it hotter and thus more luminous, than models predict. However, even if the brown dwarf absorbed all of the stellar radiation it received and kept all the heat on its dayside (didn’t transport heat to its nightside), it still wouldn’t reach the 1800K temperature observed. Furthermore, a hotter brown dwarf would mean a larger brown dwarf, which wouldn’t match the radius observations of this object. So something must be making this brown dwarf brighter while keeping it at the observed size. 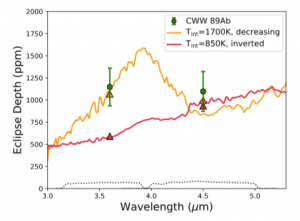 Of course there is always the possibility that our brown dwarf models are imprecise or missing important information. But CWW 89Ab does provide the first brown dwarf with all independently observed parameters for these models. So if these models do an insufficient job capturing this brown dwarf, could it mean we are interpreting all brown dwarf observations incorrectly? The authors argue strongly against this possibility, noting that it one unexplainable mystery should not be evidence that all previous brown dwarf analysis is moot. The reality is that we need to observe more secondary eclipses of CWW89Ab at varying wavelengths in order to solve this case of the over-luminous brown dwarf. And the best way to obtain these observations will be to use the Sherlock Holmes of telescopes, JWST. In the meantime, this unsolved mystery will just have to keep us in suspense.

Case of the missing Nitrogen on Comet 67P