What is causing these Little Dippers?

The now retired Kepler space telescope has done well, discovering many of the nearly 4000 exoplanets. But Kepler can be used to study anything which causes the amount of starlight we see to dip (or increase). The authors of today’s paper were looking for ‘dipper’ stars in the K2 lightcurves and instead found their smaller cousins.

The dipper stars they were looking for are young stars (less than 10 Myr) with spectral types K/M, which have deep (>~10%) dips in light lasting ∼0.5–2 days, reoccurring semi-regularly or episodically (meaning they exhibit several events over a short period of time then none for a longer period of time). These dips are believed to be caused by structures in protoplanetary disks, allowing us to probe disk structure and dynamics during planet formation.

Instead they found two objects with lightcurves like dipper stars but with dips 10-100 times shallower. Figure 1 shows EPIC 205718330, a mid-K dwarf with two single dips and another two with multiple dips. Dips are generally symmetric, with depths 0.5-1.5% and last 0.5-1 day. EPIC 235240266 in Figure 2 is a late F dwarf with six dips lasting a similar amount of time but shallower (~0.1%) and asymmetric. 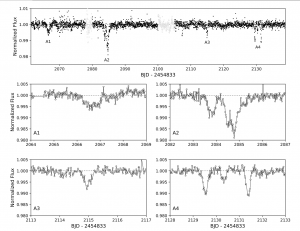 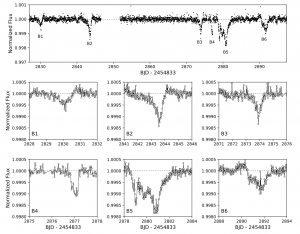 Before getting too excited, the authors checked that these dips were ‘real’ and not an artefact due to the instrument or a data processing error. After rerunning the pipeline and ruling out contamination from variable background noise and nearby bright stars, they were confident that the signal came from the stars itself.

The search for youth (and dust)

As the dippers are young stars, the authors took spectra to investigate whether the little dippers were also young. Young stars still have detectable lithium absorption in their photospheres before it is transported down to the stellar core and destroyed. The lack of lithium detected gives stellar ages of at least 800 Myr for EPIC 235240266 and at least 150 Myr for EPIC 205718330. They also found that neither star fit in with young stellar populations in terms of galactic space motion or distance, again suggesting they are not young.

If the dips were caused by dust, then we would see excess infrared light. The authors calculated how much infrared light both stars should produce using stellar atmosphere models and compared it to the photometric data. The lack of infrared excess shows that the stars do not have a dusty protoplanetary disk and belong to a different population than dipper stars, but they could still have debris disks (see Figure 3). 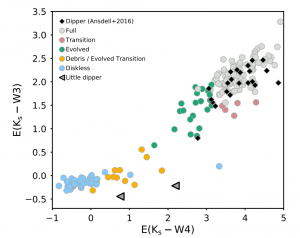 What is causing these dips?

Planets? Planets cannot cause these dips, as the dip size and duration of 0.5-1 day would put planets at an orbit of at least 1000 AU, meaning years between transits rather than the few days we observe.

Planetesimal clouds? The dips could be caused by a population of dusty planetesimal clumps, ranging from the size of a large asteroid to super-Earth size in a debris disk. The average dimming caused by the dips in EPIC 205718330 is 0.05% (dip size of 1% multiplied by the 5% fraction of time dips occur). As the precision on the WISE measurements of 0.2% is greater than 0.05%, the dips could have been present and we wouldn’t be able to detect them in the averaged data. Similarly, EPIC 235240266 has 0.1% dips 10% of the time, giving an average dimming of 0.01%, less than its WISE limit of 0.03%.

Exo-comets? Our little dippers have dips with a similar duration and depth to previously identified exo-comet candidates, although these had asymmetric shapes caused by trailing dust tails. The steeper egresses (the end part of the dip where the amount of light rises again)  seen in EPIC 235240266 suggests leading dust tails (which can be seen in disintegrating planets). While EPIC 205718330 lacks these features, it could still be caused by exo-comets under the right conditions. The little dippers show depths and durations consistent with similar sized objects disintegrating at the same irradiance (amount of radiation received from its star) that sun-grazing comets break up at around our Sun. While large comets are not expected around older stars, a tidally or thermally disrupted 10km body could produce fragments the right size, and would support the potential clustering of dip timings.

The little dippers are distinctly different to their larger cousins, being older and with smaller dips not caused by protoplanetary disks. They can be explained by planetesimal clouds or exo-comets. If caused by exo-comets, these stars would join the limited number of stars seen with these signals. Sun-grazing comets in our own system were believed to have orbits influenced by Jupiter, so if little dippers are really caused by comets, they could indicate a large planet discoverable by radial velocity monitoring.

It is curious that we do not see more exo-comet events in the Kepler data. Kepler may only have the photometric precision to detect the largest and rarest exo-comets, but the fact that more are not seen around young stars suggests they may be inherently rare. Alternatively, gas giants like Jupiter may be rare, so even if lots of systems have exo-comets, there is a low probability they transit due to their highly eccentric orbits. It will be interesting to see if more systems like these are revealed in the TESS data, allowing us to build a fuller picture of other stellar systems.