Despite our home planet being embedded in it, the Milky Way and its immediate environment remain an enigma to astronomy. Once thought to have few satellite neighbors, The Milky Way has been found to have many dwarf galaxies orbiting it. New stellar streams are being uncovered as well, likely remnants of past gravitational interactions with dwarf galaxies, in which the Milky Way pulled rivers of stars from its now-dissipated partners. This burst of discoveries of new nearby and entangled structures are thanks to advancements in technology allowing astronomers to observe dimmer objects and to track stars with greater precision.

Today’s paper utilizes one of these advancements, the much lauded Gaia, in tandem with machine learning methods to identify new substructures within the Milky Way and, in so doing, learn about its murky past.

To begin, the authors are presented with the challenge of identifying stellar structures within the enormous Gaia dataset. In order to group stars together the authors use a clustering algorithm, which is a series of steps designed to isolate populations of objects with similar characteristics; the characteristics in question here are the stars’ coordinates within the Milky Way, their parallaxes, and their proper motions. A data sample of over 19 million stars are selected from the Gaia catalog, chosen to isolate stars for which the above characteristics are measured with high certainty. After much testing of the algorithmic parameters, the model returns over 1900 star clusters, many of which have been independently identified in other studies. However, they also identify new structures that appear to have eluded other investigations (Figure 1). 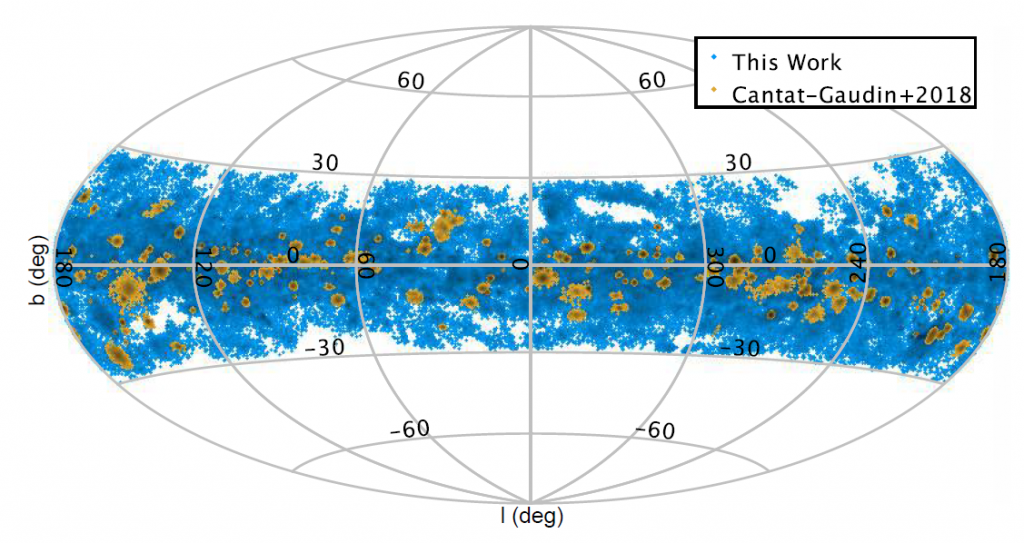 Figure 1: Map projection of the portion of the sky considered in today’s paper, with algorithm-identified star clusters marked in blue. Yellow markings indicate star clusters previously identified using different methods. Galactic coordinates are indicated with b and l. Figure 2 from the paper.

In order to learn about our galaxy’s past, the authors must gain more information about these clusters to construct a star formation history. The star formation history of a galaxy is exactly what it sounds like, a combination of all star-forming events in a galaxy’s past that contribute to the current picture seen by astronomers. However, one can’t fully understand the history by only knowing the what and the where of star formation, also important is the when.

The authors determine the ages of their identified clusters testing two separate methods: analysis by a convolutional neural network (CNN) and isochrone fitting. Training the CNN using both known real clusters and a multitude of artificial ones, they only reproduce the accepted ages of clusters in 44% of cases. Similarly, using isochrones alone is only successful in a minority of cases. Using the CNN age estimate as an input to their isochrone model, however, increases the success rate to 77%, so this methodology is used to obtain ages for the remainder of the work.

While investigating the distribution of their identified star clusters, the authors noticed that they tended to be distributed in long, narrow structures. These strings, as the authors call them, are about 200 parsecs in length and lie parallel to the plane of the Milky Way. They appear similar to stellar streams, but are these simply new streams, or something new entirely? The answer lies in a peculiar trend noticed by the authors: although these strings act very similar to normal clusters in terms of their motion, they are markedly younger than the population of clusters as a whole (Figure 2). 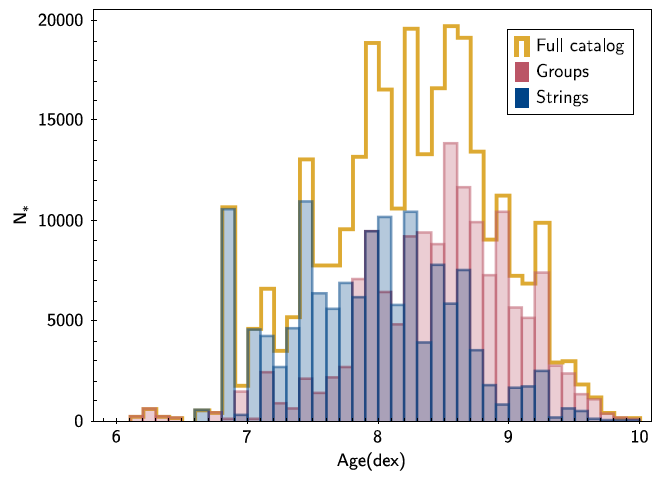 Figure 2: Histogram of the age distribution of the star clusters (called “groups” here) compared to the strings. Notice how the distribution of string ages appears to have lower ages. Figure 5 from the paper

Now, one might intuitively think that the strings were formed by tidal stretching, i.e., that the stars formed in a roughly spherical cloud that was then stretched out by tidal interactions with other structures. However, many of the strings don’t show any evidence of a residual core of stars, leading the authors to conclude that they just formed this way. This interpretation is supported by previous observations of molecular filaments within the Milky Way, long string-like structures of the dense, molecular gas that is so crucial to forming stars. The authors suggest that the strings formed from these very same molecular filaments. 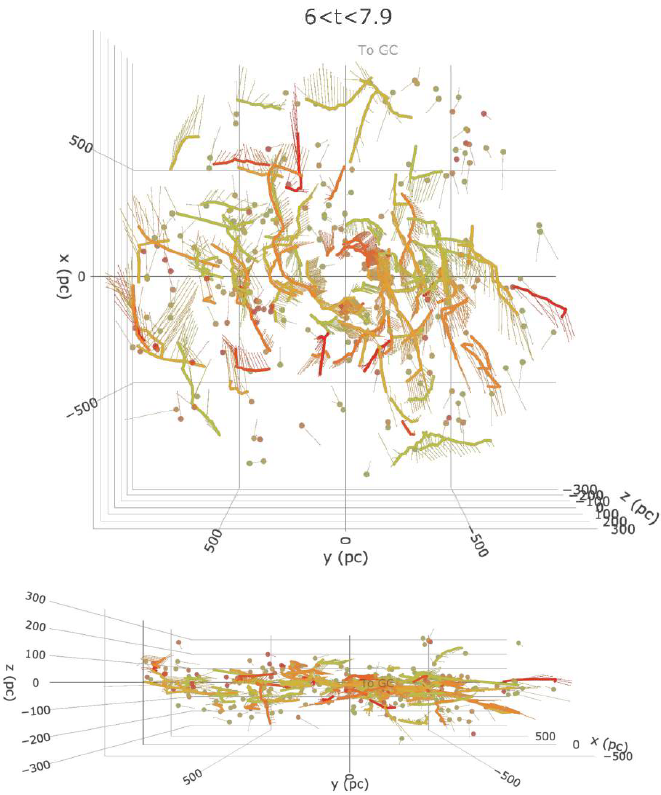 Figure 3: 3D plot of a subsample of the strings, where the thick lines represent the “spine” of the string and the thin lines perpendicular to the spine indicate the velocities of the stellar components of the string. Color indicates age, and a redder string is a younger string. Check out an interactive version of this plot on the Dr. Kounkel’s website. Excerpt from Figure 13 in the paper.

Further, analysis of the global distribution of strings (Figure 3) indicates that strings of different ages seem to lie close together, coagulating into four coherent streams of structure. Due to a correlation between the position of the youngest stream and the Local Arm of the Milky Way, the authors contend that these collections of strings may correspond to past star formation in old spiral arms within the Milky Way that have become less visible after losing their star-forming gas.

If so, deeper analysis of these strings might provide a way of studying the past structure and star formation history of our home galaxy.