To truly understand the intricacies of our Universe, we must look at it in different ways, or more specifically, in different wavelengths. Most astrophysical objects are brighter at some wavelengths and dimmer in others. Looking in optical we can see galaxies and their beautiful structures. X-rays tell us about the hot gas in environment, and radio observations can teach us about relativistic jets (for more on this, check out this nifty guide).

At the highest energies (tiny wavelength, huge frequency), we call photons gamma rays. These gamma rays can reveal the secrets about different forms of particle acceleration that occur within cosmic accelerators. While some gamma rays may be produced from scattering off of high-energy electrons or emitted from electrons gyrating around magnetic field lines, they are also thought to be generated in interactions between ultra-relativistic atomic nuclei, otherwise known as ultra-high-energy cosmic rays. Detecting gamma rays from cosmic-ray interactions, so called “hadronic gamma rays,” could help unravel numerous ongoing mysteries in high-energy astrophysics.

The authors of today’s paper sought to identify this high-energy emission coming from a special type of galaxy: Star-forming galaxies. Why? Because galaxies that are rife with star formation are also thought to be riddled with ultra-high-energy cosmic rays. Although these rampant cosmic-ray interactions are reasonably well accepted, the exact magnitude and properties of the subsequently produced gamma rays is not well constrained.

Cutting right to the chase, the authors were able to detect a very convincing signal from these star-forming galaxies. While some of these objects were bright enough to stand out as significant on their own (about 10 or so), the other 500-ish couldn’t be resolved individually, but when “stacked” together, they left an incredibly strong signal for these authors to find. For more on how astronomers stack signals together, check out this bite.

This signal was then characterized by describing the specifics of the gamma-ray “flux,” which is a measure of how many photons are incident on Earth at a given energy every second. This flux is proportional to

is the “photon index” that denotes how many low-energy or high-energy photons there are. Lower

values mean that a lot of the flux is concentrated at the highest energies. This characterization is shown in Figure 1.

Figure 1: Detection significance of star-forming galaxies in gamma rays (Figure 4 from today’s paper). The x-axis tells you about the strength of the signal, and the y-axis describes the “photon index,” where low numbers mean there are more high energy photons. The color denotes how consistent the data are with the different flux/photon index values (yellow is more likely). On the left are the star-forming galaxies bright enough to be detected individually, and the right is the cumulative signal from the galaxies which can’t be individually resolved.

While the gamma rays are interesting by themselves, the authors also noted several patterns in the gamma-ray fluxes from these objects. Star-forming galaxies are often identified using infrared catalogs, as this wavelength gives you a good handle on how much dense molecular gas galaxies are filled with. This is because when young protostars emit light, the light quickly gets absorbed by surrounding dust. This dust then heats up and emits predominantly in the infrared band, meaning that infrared is a good proxy for overall star-formation. 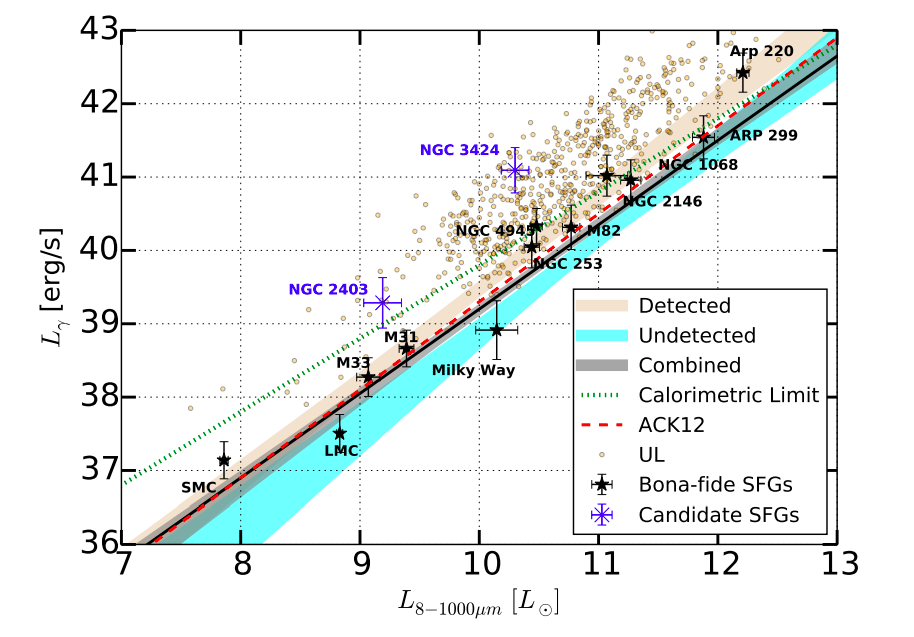 Figure 2: The relationship between gamma-ray luminosity and infrared luminosity from star-forming galaxies (Figure 5 from today’s paper). The black data points are the individually resolved galaxies. “Calorimetric limit” is the maximal gamma-ray luminosity an object can have before having deposited all of its cosmic-ray energy within the galaxy.

The gamma-ray to infrared luminosities display a clear pattern, as seen in Figure 2. This pattern is an indication that the underlying sources of the infrared luminosity and the gamma-ray luminosity are related, which lends some credibility to the fact that the gamma-ray emission is related to cosmic-ray activity. After doing a little bit of modeling, one can calculate the limit on how bright an object can be in gamma rays given its infrared luminosity before having lost all cosmic ray energy (the calorimetric limit), and the individual galaxies are found to be below, but fairly close to, this limit.

With a clearer picture of the gamma-ray flux from star-forming galaxies, the authors were able to figure out what role these galaxies play in the extra-galactic gamma-ray background (EGB), which is a measure of the total gamma-ray flux detected on Earth, after subtracting out individual sources. These galaxies seem to contribute a decent amount to this EGB (at about the 5% level), meaning there are still some open questions about the rest of this diffuse flux of gamma rays. 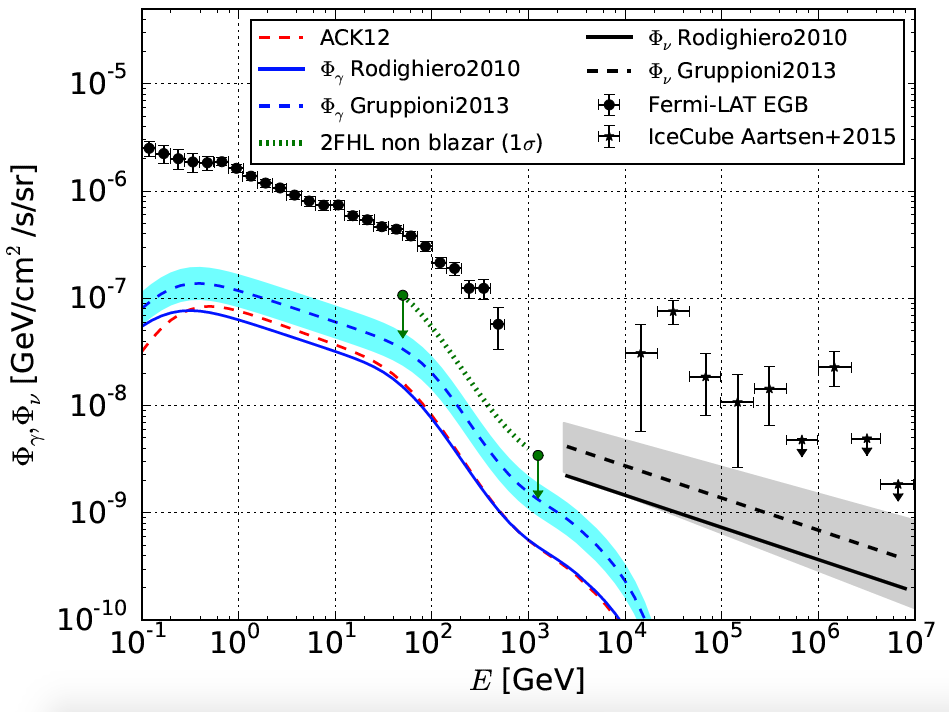 Additionally, the authors were able to look at what this finding means for astrophysical neutrinos. Whenever gamma rays are produced from cosmic-ray interactions, there should also be high-energy neutrinos. This is because cosmic-ray interactions produce particles called pions, some of which are neutral and some are charged. When the neutral pions decay, gamma rays are generated, but when the charged pions decay, we get neutrinos. To date, the origin of the astrophysical neutrino flux is a mystery, but the authors of today’s paper found that these starburst galaxies could explain up to 3% of this enigmatic neutrino flux (Figure 3, above). Although there is still a lot to explain in the EGB and diffuse neutrino flux, it seems that star-forming galaxies are a key player in the high-energy Universe.