Galaxy mergers are a key aspect of galaxy evolution and can significantly affect star formation. In a galaxy merger, the centers of the galaxies pass near each other (called a pericenter) twice before coalescing. During the merger, star forming material gets funneled to the center of the galaxy, enhancing star formation and triggering feedback mechanisms.

The time between first and second pericenter is the “galaxy-pair” stage, when the two galaxies are still distinct but interacting via close encounters. Few studies of star formation focus on the pre-merged galaxy pairs, but the effects from interactions at this stage are expected to be long lasting. The author’s of today’s paper use galaxy merger simulations to study interactions in galaxy pairs. They use idealized, rather than cosmological, simulations to obtain high enough spatial resolution to study star formation and feedback processes at the parsec scale. The simulations employ the “Feedback In Realistic Environments-2” (FIRE-2) physics models and include 24 major mergers with different orbital configurations.

Effects of interactions in individual mergers

To start, the authors focus on a particular galaxy merger which they call their fiducial run. The high spatial resolution allows the author’s to differentiate the effects of interaction in the two individual galaxies — the larger primary galaxy and the smaller secondary galaxy. Figure 1 below shows snapshots of the fiducial run for the secondary galaxy, as well as a comparable isolated galaxy (the simulation is also available as a video!).

The galaxy-pair stage lasts for less than 2.5 Gyrs after the first pericenter. During this time, the secondary galaxy in the merger develops tidal tails, as well as a high concentration of gas in the center of the galaxy (shown as a small white circle in Figure 1). These effects are not seen in the isolated galaxy, though the effects are reduced by the end of the stage. 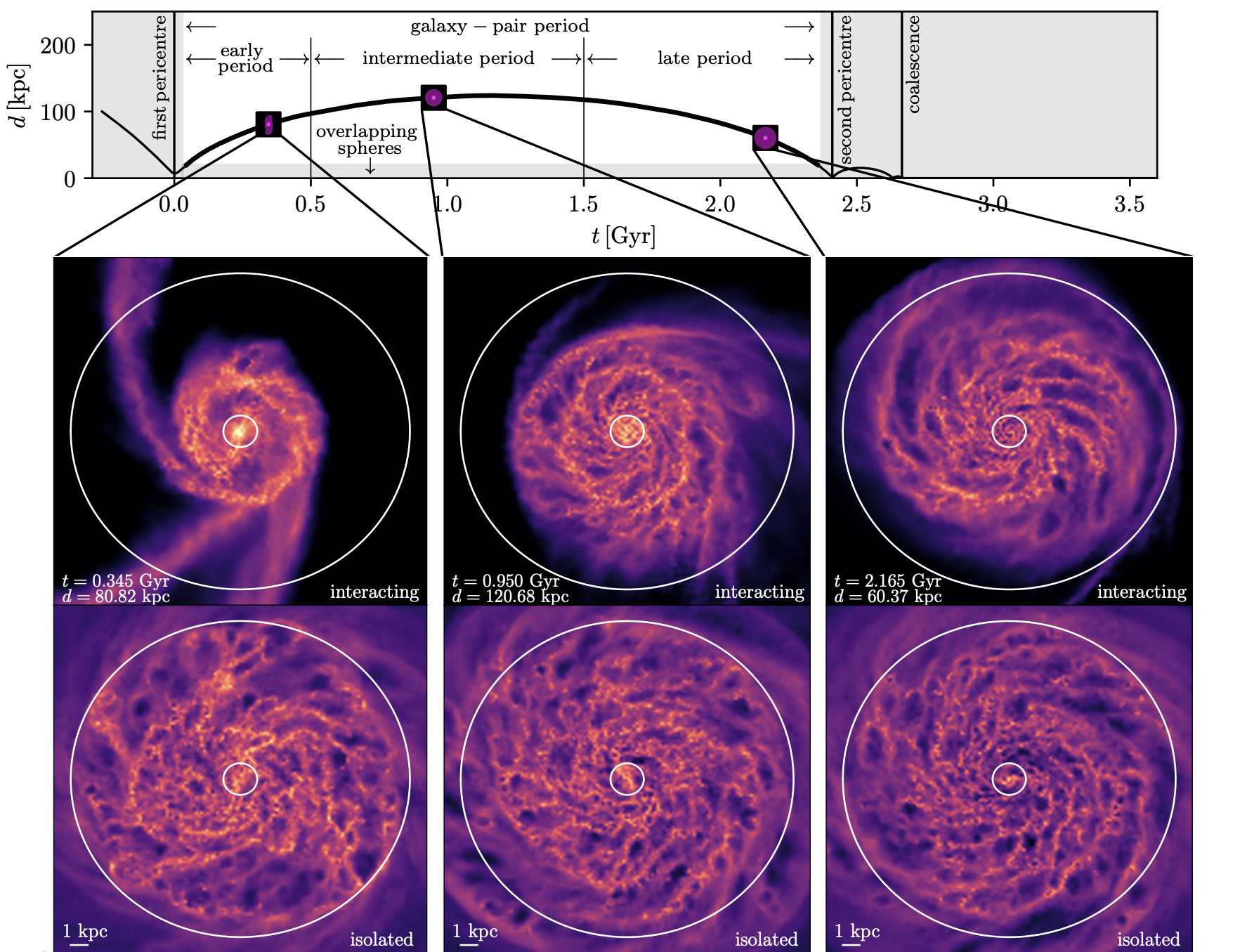 For this fiducial run, the authors look at how different ratios related to star formation evolve over time: mass of new stars, star formation rate (SFR), star formation efficiency (SFE), mass of cold-dense gas, and mass of cool gas. The ratios are calculated between the merging galaxies and the isolated galaxy. The authors find that during the early period, the mass of new stars in the center of the secondary galaxy increases due to an increased SFR, which in turn is caused by an increase in SFE and availability of cool and cold gas.

Given the timescale of the simulations (5 Myrs), it would be difficult to focus on all 24 mergers individually. Instead, the authors measure the average ratios of the five quantities for the entire sample. Figure 2 shows the average ratios for the secondary and primary galaxies, separated by region (center, outskirts, entire galaxy). 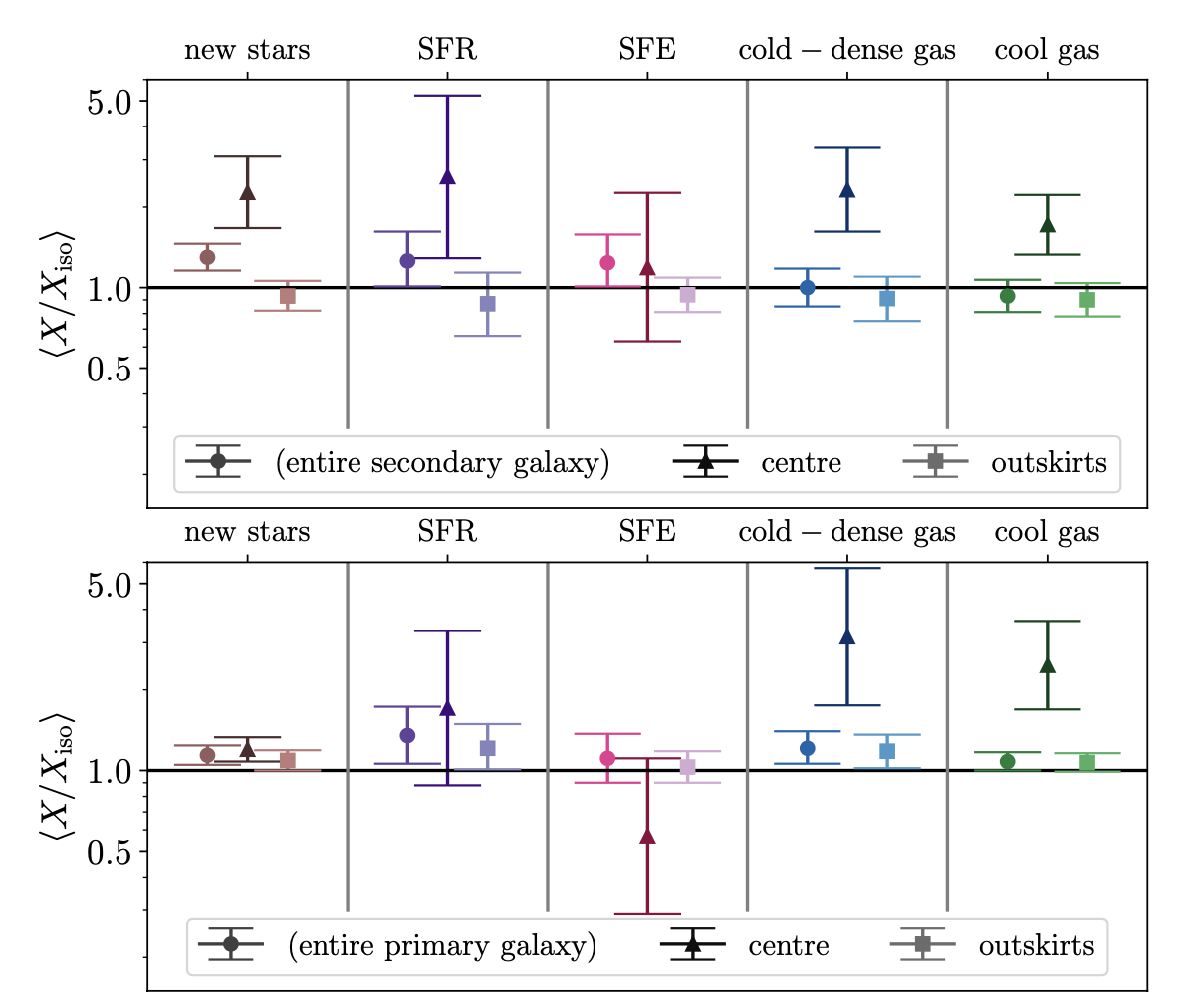 Figure 2. Top panel: For the secondary galaxy, ratios of new stars (mass), SFR, SFE, cold-dense gas (mass), and cool gas (mass), with respect to the isolated galaxy. The ratios are presented for three different regions in the galaxy as different symbols: circles (entire galaxy, < 10 kpc), triangles (center of the galaxy, < 1 kpc), squares (outskirts, 1-10 kpc). Bottom panel: Same as top panel but for the ratios between the primary and isolated galaxies. (Figure 5 in the paper).

On average, the secondary galaxies have 30% more mass in new stars than the isolated galaxies. In the center of the galaxies, that increases to 130%. Star formation rate is also enhanced relative to the isolated galaxy (25%), particularly in the center (160%). These effects are not seen in the outskirts of secondary galaxies. Since the ratio of cold-dense gas and cool gas are close to 1 for the entire galaxy (blue and green circles), it’s possible that the increased star formation rate is due to increased efficiency in forming stars (pink circle), and not due to more availability of material.

What’s going on in the central region?

The central region (~ 1 kpc) of merging galaxies exhibits the most enhancement in star formation compared to isolated galaxies. To see if this is driven by increased star formation efficiency or increased amounts of star forming material requires more careful consideration. Figure 3 below shows the ratio of SFE vs ratio of mass of cold-dense gas for all mergers, color coded by SFR ratio.

Figure 3. Left: For the secondary galaxy and isolated galaxy, the ratio of SFE vs ratio of mass of cold-dense gas, color coded by the ratio of SFR. The 2D histogram is divided by two lines that define regions of enhanced vs suppressed SFR, and fuel vs efficiency driven. Right: Same 2D histogram for the primary galaxy. (Figure 9 in the paper).

Today’s paper marks the largest galaxy merger simulation at parsec scales. This high spatial resolution allows the study of what drives star formation during galaxy-pair interactions, particularly at the central regions that experience the most enhanced star formation.