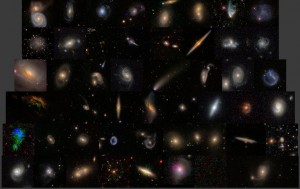 Fig 1 – Galaxies come in countless shapes, sizes, and colors. The goal of the study of “Galaxy Evolution” is to understand what causes this brilliant diversity. Images from Galaxy Zoo.

There is a wide variety of galaxies throughout our universe — see the figure to the right. Some galaxies are very large, with a huge number of stars in them. Others could have just as many stars, but are crowded together in a much smaller space. They also may vary in their morphology: whether they are flat disks (like the Milky Way) or round spheroids. A major goal in the study of galaxies is to understand where this galaxy diversity comes from: have they always been so different, or do these differences develop as they evolve?

Because galaxies change over many billions of years (a billion years is often abbreviated a Gyr), it is quite challenging for astronomers to infer how they evolve from observations alone. To study how galaxies may grow, the authors of today’s paper used a cosmological simulation (similar to the one discussed in this Astrobite). The “Horizon-AGN” simulation modeled a miniature universe filled with over 150,000 galaxies, observing how they are created and interact with one another over more than four billion years. In particular, they studied the evolution of galaxies between 12 and 8 billion years ago, when observations tell us galaxies were undergoing their largest growth spurts.

The authors consider two particular mechanisms through which galaxies change. Galaxies will slowly add loose material — such as gas and stray stars — which is captured by gravity: this is called “smooth accretion“. Galaxies will also occasionally collide and “merge” with their neighbors: these are “major mergers” if both galaxies are around the same size and “minor mergers” if one is much smaller than the other. This paper reports the group’s findings on how smooth accretion and mergers affect three important aspects of galaxy formation:

The researchers first had to create a merger tree for the simulated galaxies. At several dozen snapshots during the run, they recorded a list of all galaxies currently in the simulation. Each galaxy in the list is then connected to its progenitor galaxies in the previous snapshot. If a galaxy evolved through mergers, it may have several progenitors. One which only grew by smooth accretion would have only one progenitor, and a newly formed galaxy would have none. This process generates a family history, where each final galaxy has information on how much it grew by smooth accretion, by minor mergers, and by major mergers. 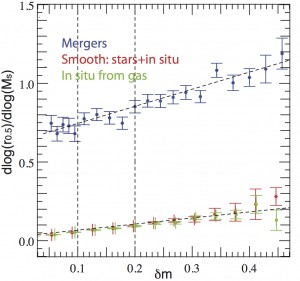 Figure 2 – The growth of galactic radii (y-axis), relative to the percentage change in galaxy mass (x-axis). Adding a given amount of mass via smooth accretion (red/green) causes very little change in radius. Instead, adding that much mass through a merger (blue) causes the radius to increase dramatically. Fig. 6 from Welker et al. 2015

The authors found that mergers and smooth accretion were each responsible for about 50% of the growth in the mass of galaxies. Yet the effects on their radial sizes were quite different, as shown in the figure to the left. When galaxies grew via smooth accretion, their radii changed only slightly. Yet a merger which added the same amount of mass usually resulted in a much more dramatic size increase.

Most importantly of all, the mechanism for adding material also affected the galactic morphology. Galaxies which underwent a major merger (or many minor mergers) became more spherical. If a galaxy already had formed a disk, it was disrupted by the violent process or merging. On the other hand, galaxies which accreted smoothly gradually became more disk-shaped. Gas is mostly pulled along a particular axis, causing the galaxy to spin up and form a disk. Even initially spheroidal galaxies became more disk-like if they only grew by smooth accretion.

With the power of these cosmological simulations, astronomers are able to trace the evolution of galaxies in ways that cannot be accomplished with observations alone. They suggest that the variety of galaxy morphologies and sizes can be connected to their history of accretion and mergers. Spiral galaxies have likely undergone fewer significant mergers than their spheroidal counterparts. The idea that elliptical galaxies are formed from major mergers also agrees with the longstanding theory of “hierarchical galaxy formation” (see this Astrobite).

Cosmological simulations certainly do not hold all the answers — many approximations are made in order to simplify the calculations. For instance, only a few thousand particles are used to model a “galaxy” that would have billions of stars in reality. Yet these simulations, rough though they may be, are a powerful tool to validate galaxy evolution models, in conjunction with deep observations of these galaxies, as viewed from billions of light years away.