Article: Pinning down the mass of Kepler-10c: the importance of sampling and model comparison

Status: Accepted for publication in the Monthly Notices of the Royal Astronomical Society, open access on arXiv

Kepler-10 (or K-10 for the acquainted) is one of those exoplanet-hosting stars that keep on giving us more and more reasons to scratch our heads. A publication from 2014 claimed that K-10c was a weirdly massive planet, possibly of a new kind of extremely solid object. Cue another study two years later — using the same technique, mind you — and a 3-times lower mass was measured. It turns out that the key piece to solve this puzzle is not exactly more data, but a more careful analysis of the already available data.

As their names imply, K-10c and its closer-in cousin K-10b were first discovered using the Kepler spacecraft and the transit technique (see this oldschool bite by Courtney Dressing), in which the planet crosses the disk of the star and causes a dip in the starlight, which we are able to measure.

In 2014, Xavier Dumusque and collaborators used the HARPS-North spectrograph to measure 148 radial velocities and obtain the first mass for K-10c (read this great summary by Erika Nesvold on the paper and Fig. 1 below), which turned out to be 17 Earth-masses. Now, that is an impressive mass for a planet with only 2.32 Earth-radii, for which we would expect something around 5.4 Earth-masses. But here is the catch: two years later, Lauren Weiss and collaborators measured an extra 72 radial velocities for the K-10 system using the HIRES spectrograph, and found that K-10c had a measly 5.7 Earth masses, bringing it down to good and old rocky planet territory.

Another way to measure the mass of planets is through what we call transit timing variations (or TTV for short): When there are many planets orbiting a star, the gravitational interaction between them slightly changes the intervals between transits. Since such changes are proportional to the planets masses, these can be measured to a certain degree of precision. For K-10c, the TTV technique provides an upper limit of 7 Earth-masses and predicts the presence of a third planet. When taking into account this third planet, the RV technique using both the HARPS-N and HIRES data results in a “compromise” 14 Earth-masses for K-10c, which is good but still leaves us with an unsolved puzzle — the unexpectedly high mass.

With all that said and done, the authors of today’s paper provide another interpretation for this conundrum: the problem is not in the results, it is actually in the data and in assuming inadequate models for the system. Using synthetic data generated in four different sampling schemes (HIRES dates, HARPS-N dates, HIRES + HARPS-N dates, uniform sampling), what they found is that, when assuming only two planets, estimates of the mass for K-10c are strongly sensitive to the mutual phases (relative positions in their orbits) between K-10c and the unseen third planet (see Fig. 2). Furthermore, for 60% of the configurations for the mutual phases, using only the HARPS-N or HIRES calendars resulted in overestimation or underestimation of the mass of K-10c, which explains the discrepancies found in previous studies.

Figure 2. The mass estimates of K-10c (color scale) in function of the mutual phase in relation to KOI-72.X, an unseen third planet candidate. The more color inhomogeneities are seen, the more the mass is sensitive to the mutual phase. The most well-behaved estimates are obtained for models with 3 planets (lower row) and uniform RV sampling (rightmost column).

Another issue lies in the unfortunate sampling of the HARPS-N and HIRES data: although together they amount to more than 200 RV data points, which we would naively assume to be enough to obtain a reliable mass estimate, they often have redundant coverage of the orbital phases of K-10’s planets, thus providing no further information!

In order to accurately pin down the mass of K-10c, the authors found that the best model, one that produces masses consistent with all datasets, contains three planets in circular orbits and correlated noise in the data. The resulting mass for K-10c using this model is 7.37 Earth-masses, which means it is a regular low-density solid planet with plenty of similar matches observed in other systems (see Fig. 3). 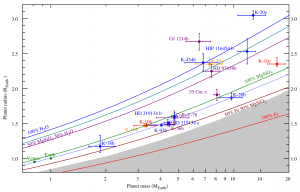 Figure 3. Mass vs. radius relation for planets observed with HARPS-N (blue symbols) and other instruments (purple symbols). The new mass for K-10c (orange symbol; compare with previous estimates in red symbol) puts it in the same category as other known rocky planets.

The authors finish by noting that, although K-10 may have been a particularly pathological case, we should still be mindful of how to coordinate observational efforts in order to obtain data that will effectively provide more information about exoplanets, particularly in uniformly covering their orbits. This will be crucial for finding rocky planets in the habitability zone of Sun-like stars.