Heating up the guts of gas giants

Title: The Intrinsic Temperature and Radiative-Convective Boundary Depth in the Atmospheres of Hot Jupiters

Jupiter sized gas giant exoplanets in close orbits around their stars, commonly referred to as hot Jupiters, have been the prime targets for probing planetary atmospheres beyond our solar system. One of the many mystifying features of hot Jupiters, which ironically also makes them easier to detect and characterize, is their inflated radii. A good fraction of known hot Jupiters have sizes larger than that predicted by evolutionary models that take into account the properties of the system like temperature, age, and metallicity of the system. What could be causing these hot Jupiters to puff up?

A proposed mechanism to explain hot Jupiter inflation is deposition of energy from stellar irradiation deep into the interiors of the planet. However, in addition to inflating the planet, energy from stellar flux heating up the planetary interiors can also radically alter the thermal structure (temperature variation with altitude) of its atmosphere which has direct consequences on its inferred atmospheric properties. Today’s paper attempts to draw a connection between the stellar irradiation of hot Jupiters and their intrinsic temperature, and how that ultimately affects the observations and our understanding of the atmospheres of these gas giants.

Structuring the atmosphere of a gas giant

The vertical thermal structure, also referred to as the pressure-temperature profile, of a planetary atmosphere is directly related to change in the mode of heat transport (radiation or convection) within the atmosphere at different heights. You can think of this in the context of the Earth’s atmosphere: closer to the surface heat exchange occurs through convection, with hot parcels of air rising up and adiabatically expanding and cooling. This causes the temperature to steadily decrease as you go up until a certain altitude (called tropopause ) after which you hit the stratosphere where the air absorbs most of the heat from UV radiation from the sun, causing the temperature to now increase with altitude. Even before this happens convection begins to weaken considerably and radiation takes over as the dominant mode of heat exchange. The altitude or the pressure level at which this happens is called the radiative-convective boundary (RCB, see Figure 1 for example). Such stratification of atmospheres is very commonly seen in planetary atmospheres in the solar system and has been studied extensively from measurements by probes like Galileo and Cassini-Huygens. 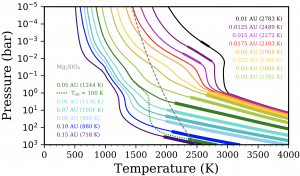 Figure 1: Pressure-temperature profiles for hot Jupiters at different distances from a sun like star and hence different equilibrium temperatures (Teq). Note that on y axis the pressure decreases as you go up, corresponding to going higher up in the atmosphere. The thick part of the profile mark the regions of the atmosphere which are convective, and you can see how the radiative-convective equilibrium boundary moves to lower pressures for hotter planets. Figure 3 in the paper.

Determining the height of RCB for gas giant atmospheres requires an understanding of the heat flux from the planetary interiors, which can be described by the planet’s effective intrinsic temperature (Tint). To give you an idea of the numbers, Jupiter with Tint ~ 100 K has RCB around the height corresponding to the pressure of 0.2 bars (1 bar = pressure at sea level on the Earth). In the case of hot Jupiters on the other hand, which given their proximity to the star receive radiation thousands of times that received by Jupiter, the atmosphere remains radiative till much greater depth and the RCB can be expected much deeper around pressures of 1 kilobar (remember pressure increases with depth). However, this is a good estimate only if you assume Tint of 100 K for hot Jupiters as well. Observed radii inflation of hot Jupiters as mentioned before points towards possible heating of their interiors by stellar irradiation ( the strength of which is reflected by the equilibrium temperature of the planet Teq). This implies that hot Jupiters can have much higher Tint, which would push the region of convection and hence the RCB to larger altitudes (lower pressures). Since Tint and Teq both affect the height of RCB, and Tint also depends on Teq, at what height should we expect RCB for a hot Jupiter with given Teq?

To answer this question, the authors calculate temperature-pressure profiles from thermal equilibrium atmospheric models of archetypal hot Jupiters with a range of Teq, and investigate how the height of RCB changes with respect to different levels of stellar irradiation (see Figure 1 and 2).

As is evident from Figure 1, the RCB moves to lower pressures (larger altitudes) with higher Teq, similar to how Tint increases with Teq. The surface gravity and metallicity of the planet also affect the RCB height as seen in Figure 2. 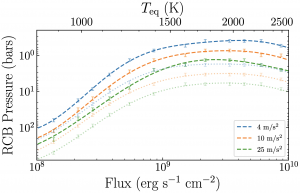 The variation of RCB height and Tint with respect to Teq of the planet has several significant implications for models and observations of hot Jupiters. RCB at lower pressure (larger altitudes) implies that more heat can now be deposited into the convective region of the atmosphere from stellar irradiation, allowing the mechanism of Ohmic dissipation to be even more efficient at inflating the planet. A higher Tint (of the order of few 100 K) would also affect predictions of day-night energy transport and atmospheric circulation predicted by global circulation models.  It would also mean that phase curve observations of some hot Jupiters might be able to probe flux from this intrinsic heat of the planet. Moreover, higher Tint means that cloud condensation will occur much higher up in the atmosphere affecting the observed emission from the dayside of the planet.

With more exoplanet discoveries from TESS and exoplanet characterization opportunities from JWST on the horizon, we can hope to obtain a stronger constraint on atmospheric boundary conditions such as these, which would be important for accurate interpretations of exoplanet atmosphere observations.

How to Find Exoplanet Oceans