In this series of posts, we sit down with a few of the keynote speakers of the 238th AAS meeting to learn more about them and their research. You can see a full schedule of their talks here, and read our other interviews here!

Is our galaxy special?

This isn’t just a philosophical question—much of our knowledge about galaxies is based on our observations of the Milky Way and the galaxies around it. In particular, detailed observations of the low-mass satellite galaxies around the Milky Way have led to a number of ongoing research questions: how do low-mass galaxies evolve? How do they build up into more massive galaxies? What role do low-mass galaxies play in reionizing the universe after the Cosmic Dark Ages?

If the Milky Way and its neighbors aren’t actually representative of other galaxies in the universe, then maybe we’ll have to rethink some of these questions!

Dr. Marla Geha, a professor at Yale University, is ready to see just how unique our Milky Way is. Geha’s plenary talk at #AAS238, titled “Our Galaxy in Context: Satellite Galaxies around the Milky Way and Its Siblings,” will focus on the Satellites Around Galactic Analogs (SAGA) Survey, a new program that aims to identify galactic systems like the Milky Way—and importantly, to study the satellites around these Milky Way-like galaxies.

It might seem counterintuitive to focus on small galaxies rather than larger ones, but low-mass galaxies are interesting for a number of reasons, says Geha. “I think of the lowest-mass galaxies as weird, extreme objects.”

For example, low-mass galaxies can be useful laboratories for studying the processes that turn off (“quench”) star formation. “If we understand what quenches a really low-mass object, we can understand the much messier situation at higher mass, where you’ve got multiple processes going on. […] That’s sort of the big story that I would like to understand: what are the processes controlling quenching as a function of stellar mass?”

Geha describes this long-term goal as a plot that she’d love to make someday: “The y-axis is the quenched fraction,” or the fraction of galaxies whose star formation has turned off. “The x-axis is stellar mass, from 109 solar masses, so about [the mass of] the Large Magellanic Cloud (LMC), all the way down to 102 solar masses, the ultra-ultra-ultra-faint objects.”

“For the lowest-mass galaxies, I think quenching is an external mechanism—reionization quenches them and they’re never able to turn back on. At the high-mass ends, like LMC and above, galaxies are able to internally quench themselves on occasion,” Geha says. As a result, we might expect the quenched fraction to be high at both the low- and high-mass extremes. “Then there’s this interesting [mass] region in the middle, where a galaxy by itself might just bubble along [forming stars] forever.” If this large-scale picture of quenching is true, we might expect to find a minimum in the quenching fraction at some mass.

The problem is actually observing enough galaxies to make this plot! “Right now, at the lowest-mass end, we only have the Milky Way satellites; at the highest-mass ends, we only have Sloan, so we’re kind of patchworking this plot together,” Geha explains. “Ultimately I would like [to measure] velocities and star formation rates for every low-mass galaxy out to 100 Mpc, but… that’s going to take a while.”

Fortunately, new instruments like the Dark Energy Spectroscopic Instrument (DESI) might help. “DESI is amazing. In just 2 hours of data, they’ve significantly increased the number of spectra at R [magnitude] of about 21,” Geha enthuses.

The reason Geha started studying low-mass “dwarf” galaxies is pretty simple: she followed her instincts. “The first time I asked an advisor for a project, they gave me a bunch [of project ideas], and there was this gut feeling that a particular project that had to do with dwarf galaxies was interesting,” she says.

That one decision may have been relatively simple, but Geha’s path hasn’t always been quite so straightforward. “When I applied to graduate schools, there was not a lot of advice on the internet. I took the GRE and did poorly, particularly the Physics [GRE], and only got into a few graduate schools. I was rejected from pretty much everywhere,” she says. Then the graduate program she attended “was fine, but it wasn’t a very good fit,” so she decided she didn’t want to stay.

“I kind of just packed my car and started driving,” she chuckles, “and I wasn’t quite sure what was going to happen. I thought maybe I would go into data science—or whatever data science was, back then—and started driving around. I ended up in fairly far north Canada at some point, and had a chance encounter with an astronomer, who was incredibly supportive and heard my story and was like, ‘you’re fine!’ And I thought, ‘that’s true, I’m fine!’ I ended up working for a year at Lawrence Livermore [National Lab] in astronomy, applied again for graduate school, and […] did my PhD at Santa Cruz.”

“Applying for graduate school a second time was really just faith. I knew I was going to be okay,” Geha says. She emphasizes the importance of making choices that make you happy, rather than trying to optimize success or meet productivity metrics. That goes for everything from what subfield you work in (“I know what keeps me happy. I wanted to do something that was cutting-edge but not cutthroat,” she says of studying low-mass galaxies) to the collaborators you choose (“I want to work with people who I enjoy working with”).

It even extends to the other activities she chooses to pursue, like outreach. “Doing outreach in astronomy is often said to be something you do on the side,” she says, “but I’ve always enjoyed [outreach], and my productivity increases when I do outreach.” Now, she has a grant specifically funding both her outreach and her research. “My outreach is now funding some of my research! Who knew?”

So to students just starting out in astronomy research, Geha says, “It’s going to be okay […] have confidence in the choices that you make, and make sure that you make them so that you are happy. Making yourself happy is really hard—it’s really hard, and it’s different for every person—but it’s required. You have to figure out how to do that, in order to be successful.”

To learn more about the research that makes Dr. Geha happy, check out her plenary talk at 5:50PM ET on Tuesday, June 8 at #AAS238! 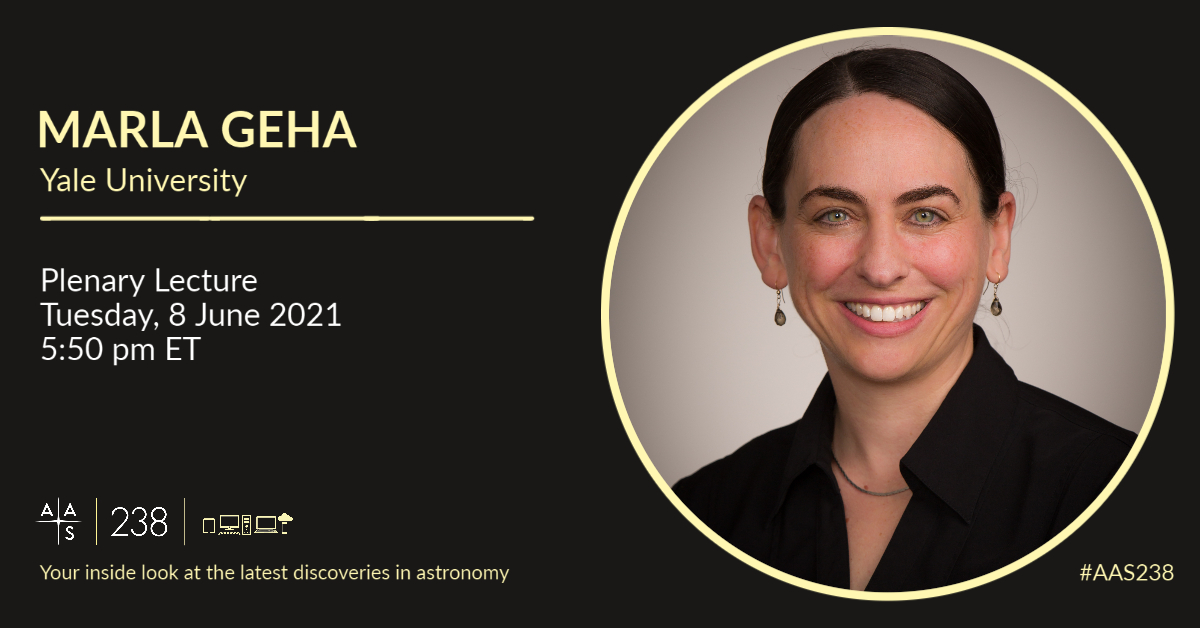 A Sip of Reionisation to Quench the Smallest Dwarf Galaxies