Supermassive black holes — the phenomenal engines that power the brightest objects in the universe, quasars — are observed only moments (ok, a few hundred million years) after the Big Bang. These observations present a major problem for astrophysics: how can these supermassive objects grow so large in such a short space of time?

There are a few competing scenarios for the formation of supermassive black holes, or SMBHs. One is that they could form from the deaths of the earliest stars, which in the pristine environment of the early universe (before all those messy metals came into existence) could have been hundreds of times the mass of the Sun. The resulting black holes would be big, perhaps up to 500 solar masses, but certainly not supermassive. A particularly vigorous growth spurt would be required to get them bulked up enough to explain observations.

A second possibility is that, in the dense environments of stellar clusters, massive stars could end up mashing together to form “intermediate” mass black holes. These would be in the range of a few hundred or thousand solar masses.

The third option is for black holes to form directly from gas in the early universe, bypassing the whole being-a-star thing and collapsing into enormous, 105 solar mass monsters which barely need to grow at all in order to become the SMBHs we all know and love in the centres of galaxies around us today.

A critical factor in working out which of these scenarios is most likely is our understanding of how black holes grow. And it’s complicated. The main ingredient is gas, but funnelling that gas into a black hole depends on processes spanning orders of magnitude in distance, from the megaparsecs-wide large scale structure of the cosmic web down to the relatively miniscule intricacies of gas falling into the event horizon of a black hole as small as our own solar system. Creating a simulation that can explore this detail as well as taking the largest structures in the universe into account is, as the authors of today’s astrobite put it, a “tremendous computational challenge”.

Many simulations tackle this by economising where they can, “zooming-in” (see Figure 1) on individual galaxies embedded in a lower-resolution universe. Even so, modelling the hydrodynamics of gas around a black hole requires far finer detail than the best resolution of large-scale simulations can achieve. This detailed physics is left to so-called “sub-grid” models, meaning that instead of increasing the resolution and working out each step according to the fundamental physics, a broader model is put in place that approximates the situation — which is much less computationally demanding. 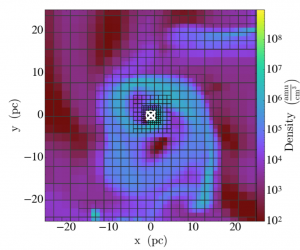 Figure 1. Zooming in on the regions of interest… the grid is adaptively refined to higher and higher resolution around the black hole, focusing computing power where it is needed most. From Figure 3 in the paper.

These crude algorithms are based on simple models of the physics of accretion, working with what can be resolved: the large scale properties of the host galaxies. While sub-grid models are a necessary evil that make cosmological simulations possible, they may have undesired effects if they are based on faulty assumptions.

Using new algorithms that make much higher resolution possible at reasonable computational costs, the authors of this paper investigate the accretion of gas onto SMBHs in much more detail than usual simulations, in order to answer the question of whether the most frequently used sub-grid models are doing an accurate job.

An important question is what effect the resolution of a simulation has on its outcome: does a coarser view of black hole feeding miss out crucial details of its growth? Figure 2 illustrates the results of both the lowest and highest resolution simulations in the paper. In their lowest resolution runs, the authors find that a SMBH grows by continuously swallowing clumps of gas in “chaotic” accretion, with the gas randomly oriented around the black hole. However, in the higher resolution simulations, a thin disc of gas forms around the black hole from which it feeds episodically, in bursts of growth. Simply increasing the resolution of the simulation drastically changes the physical processes that are observed. 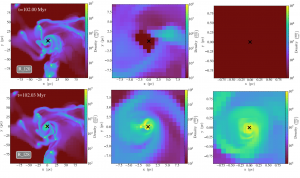 Their simulations also show that the rate at which a black hole can grow depends strongly on the structure of the gas clouds in the immediate neighbourhood, more so than on the black hole’s mass or the larger scale properties of the galaxy. They show that even a very small seed black hole can accrete rapidly given the right gas dynamics, and catch up with black holes that started out at much larger masses. Distinguishing then between the three scenarios of black hole formation in the early universe becomes even more challenging. It also poses the problem that the most commonly used sub-grid models use the black hole mass as an input parameter — even though, as shown here, the later evolution may be independent of its initial mass.

While the authors emphasise that they investigate only an idealised case — notably not taking any feedback into account — they can use the results to comment on how to use sub-grid models to effectively reproduce the evolution that they observe in their high resolution simulations. The take-home message is that the simplest models, which require the fewest assumptions, are usually the best.

What we still don’t know about accretion disks