Title:  The ATLAS3D project – XXV. Two-dimensional kinematic analysis of simulated galaxies and the cosmological origin of fast and slow rotators

The night sky is full of fantastically beautiful things.

There are huge rings of ice, pluming jets of ultra-relativistic gas, and (at a rough estimate) at least 14 balloons from children’s birthday parties. Each of these intrigues and excites us with its appearance alone; how did they come to be and what fate ultimately will befall them?

There are also quite a few boring, ugly things up there. And the structure and history of those can be just as enthralling. In this case, I believe, even more so.

We’re going to tell one of those ugly duckling stories. Except in this one we’re going to start off with a bunch of beautiful swans, crash ’em all into each other and end up with one huge, fat and sluggish duckling. (N.B. this was actually the plot of The Ugly Duckling’s straight-to-video sequel.)

The authors of this paper looked at one of the most massive objects in the universe, a Slow Rotating elliptical galaxy (SR), and how it’s complex and chaotic history allows it to lose all of its spin. 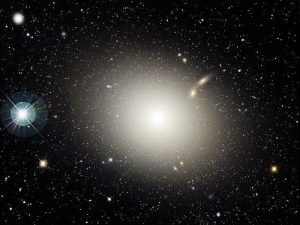 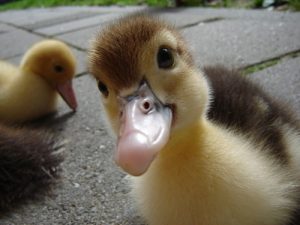 See the similarities? (side note: who on Earth thinks ducklings are ugly?!?)

The early lifetime of a galaxy is sheer revelry. Whole huge clouds of gas begin to collapse inwards under gravity, and as they fall they spin faster and faster, forming stars, collapsing down and down until the newly birthed galaxies are pirouetting through the sky fast enough that their angular momentum keeps them from falling further. These youthful new galaxies have long supple spiral arms which they throw around with reckless abandon, and they pop out new stars like a teenager pops out zits.

So how do these young, spritely, bright galaxies turn into our massive, doddering duckling. How do we go from the fast spinning, star forming, complex structure of a spiral galaxy to a formless spheroidal clump of old stars? Where does the youthful exuberance go, how is the structure lost, and what happens to all of the spin?

Anyone who’s ever seen a catastrophe at a ballet performance can probably answer that last one: collisions.

The most popular explanation of how massive, spheroidal galaxies are formed is through mergers, the process of two galaxies coming close enough for tidal forces to bring them crashing together and jumble all of their contents up into one big mess. These rip apart the spiral structure, expel much of the gas, and, given enough time, the whole thing will eventually settle into one big, round blob.

Galaxy growth, from (infuriatingly) right to left, with young clouds of gas on the far right, moving through all kinds of spirals, to massive ellipticals on the left. You can blame Hubble for the order, but thank him for the insight.

Mergers are common in the universe; even our galaxy is being bombarded by smaller objects all the time, and we call these unequal collisions minor mergers. Every so often though, galaxies of near equal mass will collide, and these cataclysmic collisions tear both galaxies apart, reforming them into one chaotic whole. These we call major mergers, and it’s a hotly debated question whether infrequent major mergers, or a constant stream of minor mergers has a greater effect on the evolution of a galaxy.

But even after we’ve formed an elliptical, it can still be spinning, just without that flat disk-like spiral structure. We see plenty of galaxies happily cavorting around long after their spiral structure has been torn apart by mergers. We call these Fast Rotating Ellipticals (FRs) because we’re all very creative.

But, the biggest, oldest elliptical galaxies are different. The orbits of their stars are a jumbled mess, making them appear not to rotate at all. These are our unexplained ducklings, slow rotators.

What we don’t see, intriguingly, is any galaxies in between. Whatever process disrupts a galaxy’s spin, turning an FR into an SR, seems to do an incredibly thorough job of it.

4 galaxies from the simulations. The black lines show the galaxy shape, and the colour the speed at which the stars are moving along the line of sight (blue towards us and red away). The top two show clear rotation whilst the latter pair are disordered and slow-spinning.

And now through simulating whole cosmic histories of galaxies we’re starting to build up a picture of FRs and SRs come to be.

The authors of the paper ran simulations to create and track a series of galaxies, from before they formed out of collapsing gas to the present day. The galaxies they followed have a whole range of different histories, with different frequencies and types of merger. Some have plenty of fresh gas flowing in over their lives, whilst others evolve in near isolation. From this sample, the authors attempt to draw out general trends in the lives of FRs and SRs.

They find the smaller a galaxy is, and the more gas it subsumes, the more likely it is to end up as an FR. More massive galaxies tend to pull in comparatively less gas, either because they’ve used up all local supplies, or they’re blowing a wind of material away so fast that fresh gas can’t find its way through.

The authors present a number of evolutionary paths that could lead to FRs and SRs. In general FRs have fewer mergers in their history, often building up most of their mass from accreting gas and converting it into new stars. SRs, in comparison, grow fat from frequent and often cataclysmic mergers. That said, major mergers can actually have a whole range of effects: depending on chance alignment they can reduce a galaxy to chaos or spin it up to faster and faster rotation.

So many factors go into the growth of these galaxies that it’s very hard to unpick exactly how we go from our spinning swans to sedentary ducklings. Sometimes in science we lack a smoking gun, but in times like this we have too many, and divining the relative role of each is a difficult task.

Why populations of FRs and SRs are so distinct remains a mystery, but this paper brings us a big step closer to explaining the elliptical galaxies in the night sky, and gives strong clues as to why some of them have chosen to give up on their cosmic dance.