TESS: Not Just a Planet Hunter

Status: Published in The Astrophysical Journal [open access on arXiv]

We expect solar mass black holes to litter our galaxy. After all, if we assume that every star over 20 solar masses creates a black hole when they die, there should be over 100 million of them out there. Yet, we have found less than 20 of them in our galaxy, with the closest about 1000 parsecs (about 3200 light years) away from us. However, models suggest that there should be a handful of solar mass black holes less than 100 parsecs (or 320 light years), with a high probability that one is only a few tens of light years from us. So, where are they?

As the name implies, black holes are very dark – so dark that within their event horizon even light, the fastest thing in the known universe, cannot escape. This makes it tough to observe them because, with the notable exception of gravitational wave observations, we depend on light to make all of our observations. If something isn’t emitting, absorbing, or interacting with light in some fashion, we simply are not going to detect it. Most of our current solar mass black hole detections come from their interactions with a binary star companion. Interaction is defined as when these black holes are close enough to a stellar companion to begin “eating” them (known as a contact binary pair). This process creates the emission of a large amount of X-ray and radio waves which we can detect. Unfortunately, this requires black holes to not only have a stellar companion, but one that is on an orbit close enough to exchange mass. This combination is rare. As a massive star dies, it first explodes into a supernova before forming a black hole (or neutron star). During this explosion, close stellar companions may be driven out of the system, destroyed, or experience significant mass loss. While not always the case, it is a driving factor for why few X-ray binary black holes have been found in our galaxy. But if we want to find any of those “quiet” black holes: the ones that are not in contact with stellar companions or don’t have companions at all, we need a new approach.

Today’s paper explores the idea that we may be able to find a new population of black holes: ones that are still in binary systems, but are up to 0.3 AU away from the stellar companion. At this distance, the black hole is far enough away to prevent consumption of its stellar companion. How do the authors propose finding these black holes? The authors argue that the exoplanet hunting satellite, Transiting Exoplanet Survey Satellite (TESS) is well equipped to be a black hole hunter.

Their idea is that black holes should demonstrate similar gravitational effects on their stellar companion as transiting planets. In particular, the authors explore two possible signals. The first is the “self-lensing” signal. As a black hole passes in front of the star, it will not block some of the light as a planet would, but instead amplify the light from an event called microlensing. Because of the large mass of the black hole, the light of the star will bend around it, creating a sharp peak (an opposite transit, a bright spot) in the light curve (see Figure 1). This has already been seen in a few Kepler light curves for white dwarfs transiting their host star, but the authors expect this to be more extreme, and therefore more easily observable, for black holes. The second observation that the authors propose is a combination of ellipsoidal variations (EVs) and Doppler beaming sinusoidal trends in a star’s light curve (also shown in Figure 1). EVs are created by tidal distortion of the star due to its orbit around the black hole. Essentially the black hole is “squashing” the star so that it is no longer spherical, a little bit like an American football in the extreme. Sometimes we see a brighter lightcurve and therefore more of the star and sometimes we see less. Another effect is relativistic or Doppler beaming. As the star orbits the black hole, the light we observe will experience time dilation, Doppler shifts, and an excess of photons in different directions, all due to the black hole’s extreme gravity. We have already observed these two effects for transiting exoplanets, but the authors again expect these signals to be extremely large for a black hole. The combination of all of these is shown in Figure 1. Notice that the self lensing only occurs when the black hole is in front of the star, while EVs and Doppler beaming occur during the whole orbit. 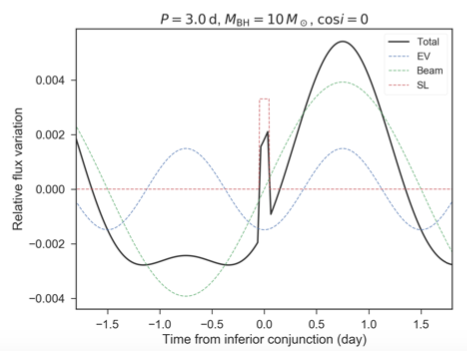 Figure 1: The expected light curve of a 10 Solar mass black hole with a Sun-like star orbiting it with a period of 3 days. Each signal is represented with a different color, with the self-lensing event occurring during the black hole is directly in front of the star. Time from inferior conjunction in this plot is the time from the black hole transiting the star. The total signal we would expect is plotted in black, which is just the combination of the three models. (Modified version of Figure 2 in today’s paper)

How Many Black Holes Will TESS Find?

The authors apply statistical approximations to determine how many black holes they expect TESS to discover assuming two different models: the black hole formed without affecting its stellar companion, or the black hole interacted with its stellar companion prior to formation. The difference in the two models translates to the number of expected black holes with a close enough stellar companion, with the interacting model having a larger yield due to the interaction causes the star to migrate inwards. However, the actual population of solar mass black holes is unknown, and the authors are forced to approximate only on the distribution of X-ray binary black holes from what we have found so far. Their predictions for the number of X-ray binaries that TESS should find are shown in Figure 2. In order to approximate the expected yield of black holes, they first inflate the distribution of known X-ray binary black holes by some factor f to account for all the X-ray binary black holes we have missed. F is a factor that is currently unknown, so the authors randomly choose an f-value of 30 and 1000 to demonstrate their point. However, the number of black holes closer than 1000 parsecs is still unknown. To compensate for this, the authors assume a decreasing linear trend highlighted as dashed and dotted lines in Figure 2. 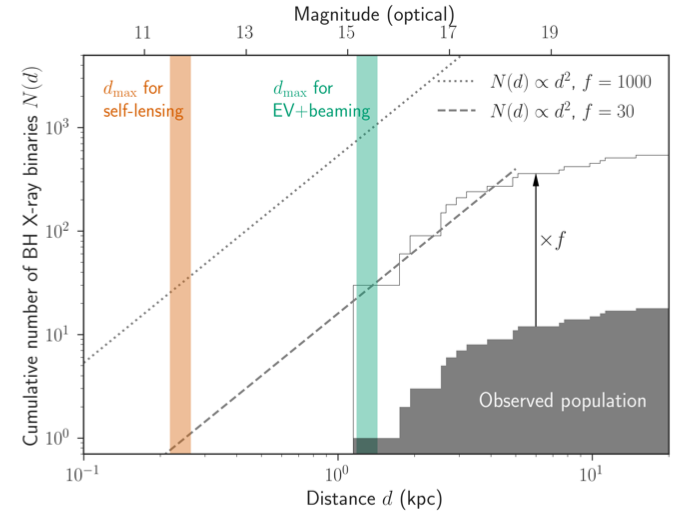 Figure 2: The predicted number or cumulative (sum) number of black holes producing X-rays when consuming the stellar companion (contact binaries) as a function of distance in kiloparsecs. The gray histogram represents our currently observed population. The dotted and dashed lines represent what this population might actually be depending on what factor of f we scale it by. The orange bar is the maximum distance to which we could detect a self-lensing event. The green bar is the maximum distance we can search for black holes with TESS using the EVs and Doppler beaming signals. The number of X-ray black holes we find with TESS using these two methods will tell us what f should actually be. The authors don’t repeat this exercise with non-contact binary black holes because we haven’t actually found any yet, so there isn’t a population to scale from. (Figure 7 in today’s paper).

The authors also note that the fainter a star is, the harder it will be to separate a signal from the noise. Because of this, they expect we will only find the self-lensing signal out to a distance of a few hundred parsecs. Ellipsoidal variations and Doppler beaming are stronger signals compared to self-lensing and can be detected out to about 1000 parsecs. Using Figure 2, the authors approximate that even if we assume an f-factor of 30, the self-lensing method will still find one X-ray binary black hole, while EVs and Doppler beaming will find an additional ~20. However, TESS might be more successful than this as the authors note they only performed this approximation for contact binaries. If there are more non-contact binary black holes nearby, TESS should be able to find them!  Even if TESS is unsuccessful, the authors note that a non-detection of black holes is still an interesting result as it means that these solar type black holes aren’t as common in quiet binary systems as we initially thought.

Currently no solar mass black hole has been detected by TESS, which was launched in April 2018. Yet, whatever TESS ends up finding after its two year primary mission, this little planet hunter will actually help shed some light on these mysterious dark objects!