The Hubble constant (H0) has quickly become a star in the world of forced astronomical acronyms (H0LiCOW, SH0ES), and for good reason. Measuring H0 quantifies the expansion of the universe, and is how cosmologists converged on the idea that we live in a universe that is accelerating in its expansion due to dark energy. Discrepant measurements of H0, which has been dubbed the Hubble tension, has been a big deal lately, not only in the cosmological community, but also on this site! Don’t take my word for it – Each word links a different bite!

There is a lot of great material in those bites, so we’ll just settle for the one-sentence version of the Hubble tension here. Measurements of H0 at late times using type Ia supernovae (74 km/s/Mpc by the SH0ES team) and at early times using the Cosmic Microwave Background (67 km/s/Mpc by the Planck team) are different enough from each other (at >3σ) that cosmologists had to come up with a name for the problem – the Hubble tension. Many (though not all) cosmologists have been racking their brains for years now over what might be causing this tension, and today’s paper addresses the prospects of a particular model that purports to solve it.

Recently, a model called “Early Dark Energy” (EDE) has been invoked as a possible solution to the H0 tension (for a discussion of this paper see this bite!). Simplifying, EDE adds an extra component (something like an axion) to the standard cosmological model, ΛCDM. Adding EDE to ΛCDM can change the physics of recombination at the time that the CMB is produced (namely through lowering the sound horizon). The physics changes in a way that raises the value of H0 measured by the CMB. To do this, EDE has to amount to just enough of the total energy density budget of the universe (~10%, see Figure 1). This fraction, essentially the “strength” of EDE relative to other components in the universe (like dark matter and radiation), is quantified through the parameter f_EDE. There are two other EDE parameters (z_c and θ_i) that control the timing and decay rate of EDE, but here we’ll focus on f_EDE. 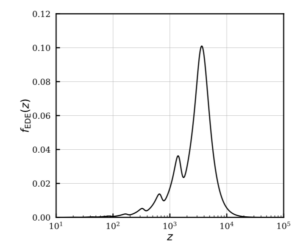 The initial proposition of EDE to alleviate the H0 tension seemed to accommodate both early (CMB) and late (supernovae) cosmological datasets. However, a recent analysis by a subset of the authors of today’s paper takes an opposing view – the title says it all – “Early Dark Energy Does Not Restore Cosmological Concordance“. Since today’s paper is essentially an extension of this analysis, let’s go through a key point of this predecessor paper. These authors found, in their delightfully-titled “walking barefoot” subsection, that when multiple cosmological datasets are combined including SH0ES, EDE seems to improve the Hubble tension. However, when we go barefoot (take off our SH0ES) and use only the non-SH0ES datasets, EDE is strongly disfavored. When the SH0ES data is left out, there is no reason to favor EDE over the standard ΛCDM model. These authors show that a reason for this is that EDE changes another cosmological parameter (σ8) to a value that disagrees with the one preferred by one type of data they include – Large-Scale Structure (LSS) data. LSS is the study of how galaxies and dark matter are organized in space on cosmological scales (for more see these bites). 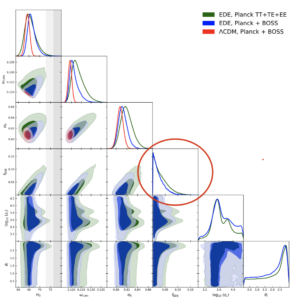 Figure 2: Constraints on three cosmological parameters as well as the three EDE parameters. The constraint on the EDE fraction parameter fEDE is circled in red. Planck refers to the CMB measurement, while BOSS refers to the LSS measurement. Adapted from Figure 5 of today’s paper.

Results – Large-Scale Structure in the Spotlight

In the context of the H0 tension, LSS provides an independent measurement of H0 at a time between those probed by the CMB and the SH0ES (supernovae) measurements. Through measuring the Baryon Acoustic Oscillation (BAO) feature – a preferred scale at which galaxies cluster together – LSS can constrain cosmological parameters like H0. However, instead of using just the BAO feature of LSS, which is only part of the galaxy clustering signal, the authors use a fuller description of galaxy clustering in their model. To use this fuller description, it is important to include EDE consistently in the model for galaxy clustering. The authors of today’s paper do this, and find that it improves the constraint on f_EDE placed by CMB data (excluding SH0ES). This can be seen in Figure 2, when the authors include the LSS data, they find a preferred value for f_EDE that is smaller than when they use only CMB data. The limit they find for f_EDE shown in Figure 2 is quite far from the 10% value necessary to improve the Hubble tension, so the analysis presented here strongly disfavors EDE.

While it seems less likely that EDE may answer the Hubble tension, there has to be some explanation! As ever more data rolls in from future LSS surveys (such as DESI and VRO) the constraints cosmologists can put on new models will be tighter and therefore more decisive. In the meantime, what is certain today is that the Hubble tension will remain a H0t topic!