Title: On the Robustness of the Acoustic Scale in the Low-Redshift Clustering of Matter

The Baryon Acoustic Oscillation (BAO) feature provides perhaps the most famous cosmological parameter constraints from large-scale structure (LSS). This is not a surprising statement today – the BAO scale has been measured repeatedly (in particular by the Baryon Oscillation Spectroscopic Survey [BOSS]) and is used in modern LSS analyses to constrain cosmological parameters like the Hubble parameter and quantify the impact of dark energy.  These constraints are possible because the BAO feature is the result of sound waves in the early universe. However, in the not-so-distant past, the prospect of measuring the BAO feature from the distribution of galaxies tracing large-scale structure was murkier. In particular, nonlinear structure formation (which produces the cosmic web) could have potentially clouded the cosmological interpretation of the BAO feature.

But did it? If so, how bad was the contamination? The authors of today’s classic paper meticulously walked through that exact question. We’ll explore a small slice of their results in this bite.

On the evolution of species

The BAO is a manifestation of sound waves in the photon-baryon fluid in the early universe. The BAO feature as cosmologists observe it in the galaxy distribution today can be thought of as due to the superposition of many point-like perturbations. So we can get a feel for the physics of how the BAO feature is imprinted on the late time dark matter, and therefore galaxy, distribution by thinking about a single perturbation (at the origin). Following today’s authors, we’ll take a look at an animation that tells this story for all the relevant species – dark matter, baryons, and photons (here we will ignore neutrinos).

At early times all species start at small radius as overlapping bumps. However, the dark matter quickly falls behind, remaining at small radius, while the photons and baryons travel together (as an acoustic wave of photon–baryon fluid) out to much larger radius. Around recombination  (0.3 Myr in the top right of the Figure) the photons can begin to escape from the combined fluid and propagate to much larger radius. At this point the baryons lose their pressure support and gravitationally cluster among themselves out at large radius. At late times, the broad dark matter perturbation at smaller radius grows, carrying some baryons along with it. But at the same time, the enhanced baryon bump at large radius also pulls the dark matter along for the ride as well.

By the end of the animation, the matter (combined dark matter and baryon) distribution, which sets the stage for the formation of galaxies observed today, is characterized by a rapidly falling broad bump with a small but pronounced feature at large radius – this is the BAO feature. Since galaxies trace the underlying matter distribution, the statistics of their separations should show a preference for a separation the size of the BAO scale.

Sounds great – let’s just go out and measure the bump in a galaxy survey! Unfortunately, the story isn’t over yet – we neglected a key part of the evolution of the matter distribution at late times. The animation of Figure 1 is produced entirely using “linear theory”, which means we didn’t account for the nonlinear gravitational evolution that results in the cosmic web as well as halo and galaxy formation. These are the kind of effects necessary to connect to observations that are captured by a dark matter N-body simulation, which is exactly what today’s authors use to model how nonlinear evolution affects the BAO feature.

Figure 1: Time evolution of a radially symmetric perturbation (integrating the curves gives total mass) starting at the origin. Initially baryons are coupled to photons and quickly travel out to large radius, producing a bump at the BAO scale. At late times, this results in dark matter accumulating at the BAO scale. To the best of my knowledge, frames from this animation are what make up Figure 1 of today’s paper (which can be found here).

So how does nonlinear evolution affect the BAO feature? Today’s authors show what happens to the feature corresponding to the bump we saw before through N-body simulations and develop a model that captures the essence of the change. To do this, they consider what happens to matter in two locations that are initially separated by the BAO scale (around 150 Mpc) as nonlinear evolution occurs. By looking at many such separated pairs they find that the final probability distribution of separations is approximately Gaussian with mean given by the BAO scale. This means that the sharp BAO feature we saw in Figure 1 essentially is smeared out over slightly smaller and larger radii. Physically, this smearing corresponds to cluster formation and large-scale bulk flows. The (Gaussian) width of this smearing is roughly 10 Mpc (and depends on redshift), which is less than the total width of the original BAO feature, so we don’t expect that it should be totally smeared away. This is what we see in Figure 2, which shows the correlation function (essentially how likely pairs are to be separated at a certain scale) of matter.

The correlation function shows us that the feature we started with (dashed curve) gets smeared – widened and reduced in amplitude – by the nonlinear evolution (solid curve). Notably, it does not get visibly shifted! So cosmologists can still use the BAO scale as a clean way to connect to cosmological parameters that set up the feature we saw before nonlinear evolution. Today’s authors go into great detail explaining this, and one facet of this explanation is a model for the correlation function (red dashed curve). The model captures the smearing observed in the simulations – and it does this through the Gaussian displacement distribution we saw before. We won’t get into it here, but it turns out these statements hold not just for matter in simulations but also for (linearly biased) galaxies after accounting for the observational effect of redshift-space distortions. This ensures the galaxy distribution’s connection to pre-recombination physics. 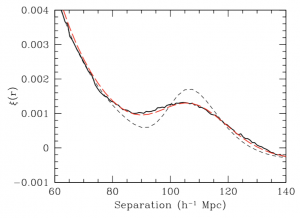 Today we saw how making measurements of large-scale structure to learn about cosmology can be a tricky business in the presence of nonlinear evolution. However, we got a flavor of what makes BAO analyses so successful through the investigation of today’s paper – even though the BAO feature gets smeared out, it is still identifiable in the nonlinear matter (and galaxy) distribution. While using other probes of LSS beyond just the BAO feature is now more common in cosmological analyses, the “clean” nature of the BAO feature we saw today means it will continue to be a critically important observable.