Title: Constraints on ΛCDM Extensions from the SPT-3G 2018 EE and TE Power Spectra

If you’ve been paying at-*tension* to cosmology recently, you may have heard about the Hubble tension, or the disagreement of the local (distance ladder) and cosmic microwave background (CMB)-based measurements of the hubble parameter H0. This thrilling mystery has kept many of us at astrobites on the edge of our seats for quite some time – if you don’t believe me, see here, here, here, here, here, here, here, here, here, and here. There’s a good reason for this – which is that the tension still hasn’t gone away!

More data has come in on both the local and CMB sides (and everywhere in between), but still no widely accepted systematic effect has been identified that could cause the discrepancy. To make things worse, more theory-oriented cosmologists have had a very tough time coming up with a plausible physical mechanism beyond the standard cosmological model (flat ΛCDM) that can ease the tension.

Today’s paper will take us to the South Pole and provide an update on the H0 tension using recent data from the SPT-3G CMB experiment. In particular, the paper focuses on measurements of CMB polarization from the South Pole Telescope (SPT), constraining extensions to the flat ΛCDM model, and investigating if these extensions might alleviate the H0 tension. To top it all off, the authors put the tightest constraint on H0 to date from standard CMB analyses using temperature and polarization data from multiple CMB experiments.

The CMB provides a direct window into the early-universe process of recombination, in which the universe cooled sufficiently so that electrons could partner up with nuclei to form atoms. Before recombination was fully complete, free electrons abounded and CMB photons rapidly (Thomson) scattered off of them as the universe cooled. As recombination proceeded, free electron scarcity set in and photons scattered less frequently, eventually breaking free of the electrons entirely. These are the photons we see in the CMB.

What does this have to do with polarization? Well, if we assume that photons are initially unpolarized, then Thomson scattering off the electrons can induce polarization of the CMB photons! To understand how this can happen, we need to know just one fact about this induced polarization: light (as a classical electromagnetic wave) cannot be polarized along its direction of propagation.

We can see this fact in action in Figure 1. Two classical EM waves enter from the top and left to Thomson scatter off an electron. The crosses indicate their directions of polarization, which are perpendicular to the direction in which they’re traveling (which follows from our one fact). Note that the size of the cross is meant to indicate the wave intensity, which we can think of as temperature, so the blue cross is hotter than the red cross. On the way out, we see that the only component of each of the polarization crosses that survives is the component that is not aligned with the outgoing wave’s new direction of propagation. The net result is a final wave with more polarization along the vertical axis than along the horizontal axis – i.e. a linear (vertical) polarization.

Figure 1: Schematic view of how quadrupole anisotropy in CMB temperature can produce linear polarization via Thompson scattering off an electron. Two unpolarized photons, one hot and one cold, come in along different axes with different intensities. After scattering, the outgoing photon leaves with a net polarization. Animation from Wayne Hu’s CMB tutorials.

One more thing before we head to the South Pole to observe these photons: we need a special temperature configuration to produce the final net polarization – it won’t always happen. To think about this, imagine that both incoming waves in Figure 1 had the same size polarization crosses (and therefore the same color). Then the final wave would have no net polarization. As we saw, the only reason we got a net polarization was because the waves came in at 90 degrees and had a difference in temperature. The word we use for the configuration that produces polarization is “quadrupole anisotropy,” which we’ll unpack here. Anisotropy refers to the fact that the intensity is different in different directions (blue or red) and quadrupole refers to the fact that the variation in temperature with direction occurs at 90 degrees (i.e. 2pi divided by 4 – quad).

Today’s paper uses new polarization measurements to conduct a thorough investigation of several possible extensions to the standard flat ΛCDM cosmological model, including extra relativistic species, the amount of primordial helium, massive neutrinos (as well as the possibility of sterile ones), and spatial curvature. It turns out that when the latest SPT-3G polarization data are considered, none of these extensions deviate significantly from flat ΛCDM or alleviate the H0 tension. Here we’ll focus on just one of these extensions – the spatial curvature – to get a flavor for how adding datasets can change constraints on H0. 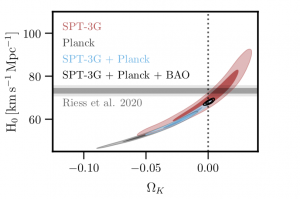 Figure 2: Projected parameter constraints from several datasets in the H0-Ωk plane. When data from SPT-3G is combined with data from the Planck spacecraft and with BAO, the possibility of a non-flat universe becomes very unlikely. The local H0 measurement of Riess et al 2020 is denoted by the gray horizontal band, while zero curvature is shown with the dotted line. Figure 5 of today’s paper.

Coming back to the curvature, we can see in Figure 2 how one might think the H0 tension could be alleviated by a higher value of the curvature parameter Ωk due to the “degeneracy” (overall trend) between H0 and Ωk. From CMB constraints alone, either from SPT-3G, Planck, or their combination, it would seem that there is a strong degeneracy in these two parameters. Looking at the SPT-3G constraints, we might think if we had a high enough curvature we could accommodate the local H0 value of around 74 km/s/Mpc. However, we see that even though the degeneracy doesn’t go away when combining only with Planck, a high H0 is disfavored, and nonzero curvature (and high H0) becomes extremely unlikely when Baryon Acoustic Oscillation (BAO) data from Large-Scale Structure is added. Adding the BAO data also causes the trend of H0 with Ωk to totally disappear!

By combining datasets from different CMB experiments, today’s authors obtain the tightest CMB-based constraints on H0 for the standard flat ΛCDM model (Figure 3). In addition to the data from Planck, the authors add in Data Release 4 (DR4) of the Atacama Cosmology telescope (ACT) CMB experiment. In Figure 3 we see that the constraint contours generally have similar shapes (reflecting the nature of degeneracies in CMB measurements), but do show noticeable differences. When all datasets are combined for TT+TE+EE, the tightest constraints emerge (black open contour), and many of the trends present for either temperature or polarization are lessened.

This result is also a bit of a follow up to an earlier SPT-3G paper (led by the same authors) that found that the EE measurement alone seemed to favor an H0 value closer to the local value of 74 km/s/Mpc. By looking at Figure 3, we see that clearly this is no longer the case when considering constraints from multiple experiments, and a high value of H0 is even further disfavored in TT and TE individually as well as in TT+TE+EE jointly.

The more (data) the merrier!

Combining datasets – whether from different experiments or different signals (such as temperature and polarization) – can lead to very tight constraints on cosmological parameters. More importantly, such combinations can break parameter degeneracies, or show that a trend favored by one dataset disappears when others pitch in their two cents! Today’s authors leveraged this fact to show that recent polarization data disfavor several extensions to flat ΛCDM, none of which alleviate the H0 tension, and were able to get the tightest CMB-based constraint on H0 so far. If anything, today’s paper has *taut* us that the Hubble tension is not going anywhere soon!