Astronomy and Astrobites in 2017

How did your 2017 go? If you replied “as well as it did for gravitational wave observers and terrestrial planet hunters,” then you probably had a fantastic 2017!

Last year was filled with a plethora of exciting events for both professional and amateur astronomers interested in a wide variety of topics. The nearby TRAPPIST-1 system that we had previously written about turned out to have not just three, but seven near Earth-sized planets, a few of which are among the best exoplanets we know of for studying their habitability. 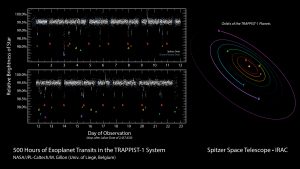 Figure 1. Left: Light curve showing all of the TRAPPIST-1 planets transiting their M-dwarf star. Right: Orbits of each planet. Check out the star system’s website for more.

The third and fourth ever black hole mergers were reported in the middle of the year. Then, a week after the detection of gravitational waves won the Nobel Prize in Physics, LIGO reported their first ever discovery of a binary neutron star merger, pushing the terminology of “multi-messenger astronomy” — which refers to events observed through at least two different types of signals (in this case gravitational waves and the usual electromagnetic radiation) — into the spotlight. Expect to see many more of these multi-messenger events in the near future. 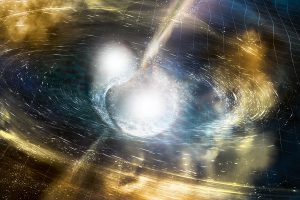 Meanwhile, we were finally greeted by aliens from another star system! Boyajian’s star returned to the limelight, with telescopes around the world beginning to monitor it for any (more) unusual activity. And while the star’s mysterious mysteries turned out not to be caused by aliens (to no one’s surprise), humanity did become acquainted with the alien object ‘Oumuamua, an asteroid whose trajectory suggests it must have originated from outside the solar system.

In a changing of the guard, Cassini had its Grand Finale at Saturn — diving into the planet to produce one final set of scientific results after completing what turned out to be a nearly 20-year mission. Replacing Cassini as the foremost orbiter in the outer solar system is Juno, which arrived at Jupiter last July, and began reporting its first science results this summer. Juno also made headlines again at AAS this month. 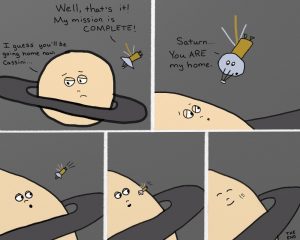 On August 21st, over a million people flocked to a less than 100 mile-wide strip of the United States stretching from the Pacific Ocean to the Atlantic to see something many of us had never seen before: a total solar eclipse! A while back, Susanna Kohler wrote about a plan to create a video of the moment of totality as it travelled from the west coast to the east coast of North America by combining thousands of user-submitted photos from locations across the country. Check out the results of that project here. 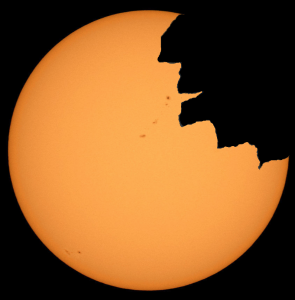 Figure 5. What the solar eclipse looked like in the Astrobites world.

All in all, we are happy to have had the opportunity to cover all of these headline-grabbing events, along with all of the little advances in astronomy we write about that personally fascinate each of us in different ways.

This Year at Astrobites

We here at Astrobites were also up to a lot last year. 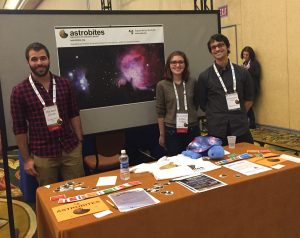 Figure 6. A small subset of the Astrobite authors and space turtles at AAS 229. 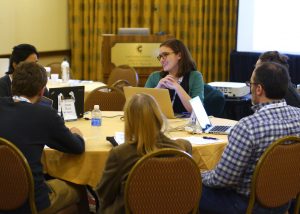 Who read Astrobites in 2017? New York replaced Boston as the city providing the most Astrobite views with nearly 6000 unique sessions. Meanwhile, London remained at the top of the list outside the US with nearly 5000 sessions, and Toronto jumped into a distant second place with about half as many views as London. 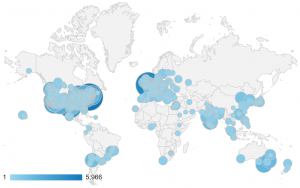 Figure 8. Map of Astrobite readers around the world.

Overall, our total readership increased by about 2.5% for the second consecutive year to just above 450,000 page views. Do you know someone who would be interested in reading our website, but doesn’t know about Astrobites yet? Share our poster below. 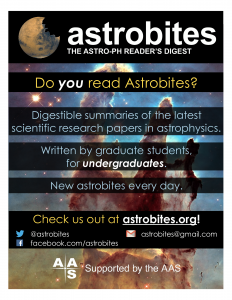 Our five most-read astro-ph summaries of the year primarily represented the most newsworthy events that took place in the astronomical world, with one other bite on the first-ever exoplanet also popping up on the list.

(2) TRAPPIST-1: Just right? by Elisabeth Matthews
In this bite we dig into the details of the recent discovery of 7 habitable zone planets orbiting TRAPPIST-1.

(3) Discovery of Water on 51 Peg b by Joey Schmitt
Clever data analysis reveals the existence of water on the first planet ever discovered orbiting a Sun-like star.

(4) Multi-Messenger Observations of a Binary Neutron Star Merger by Ashley Villar and Mike Zevin
A ripple, a flash, and a bang. The holy grail of multi-messenger astronomy as been discovered — a binary neutron star merger captured in gravitational waves and light!

Top 5 Bites from beyond Astro-ph

We also had an interesting variety of topics beyond astro-ph, including bites on raising awareness for the importance of mental health and how learning more about a topic will not necessarily change preconceived ideas among our most-read posts.

(1) The Proposed US Tax Plan by guest author Miles Currie
And what it means for graduate students.

(2) Research is Hard by Emily Sandford
And graduate students are feeling the burden.

(3) A guide to different grad programs by Mia de los Reyes
Want to do astro research, but not sure what kinds of graduate programs to apply for? Look no further–this post outlines everything you need to know about the differences between astronomy, physics, and other types of graduate programs.

(4) Why I won’t change my mind by Zephyr Penoyre
The more we know the more certain we become. But do we come closer to the truth? We’d all like to believe we do, but that may not be the case. There’s a danger to that certainty. We can read the narrative we want into data, strengthening our resolve and isolating us from the arguments of others.

(5) Astronomers Beyond Astronomy: Using Your Degree Outside of Academia by Jamila Pegues
Academia isn’t the only future open to an astronomy degree. In this ‘beyond’ post, we discuss the universally-useful skills you can hone as a student, and then explore a variety of non-academic jobs where you can put those skills to good use.

And with that, we celebrate the end of our 7th year. Many of the stories we highlighted in 2017 will have follow-up studies this year, and we also await plenty of brand-new discoveries in astronomy. We hope you enjoy reading our website, and thank you for helping Astrobites continue to thrive and grow!

Is there anything you would like us to write about in 2018? Let us know in the comments or send us an email.